Reconstructing what happened at the scene of a traffic accident or a crime is a complex undertaking involving scientific methods, physical evidence, deductive reasoning—and their interrelationships. It also requires hardware to gather data and software to analyze it and display it.

Laser scanners have become standard equipment to collect data for accident and crime-scene reconstruction. Diagram software that can process the point clouds generated by those laser scanners is essential to transform them into useful graphics.

Agent Clint Norris of the New Mexico State Police (NMSP) has been in law enforcement for 11 years. For the past six years, as a crime scene investigator, he has processed crime scenes, written reports, conducted analyses, and testified in court.

Norris hopes that his agency’s current search for a new diagram software will lead it to adopt Map360, which he first encountered in 2016 when he was trying to find software that would enable his agency to make the most use of its 3D scanning data. He corresponded with Map360’s manufacturer, MicroSurvey, and was invited to attend a training seminar at which he was certified as a Map360 instructor. He has been using it since.

“One of the top things that I have been impressed with,” Norris says, “is the ability to import the entire point cloud and use it in my drawings.”

The diagram software he previously used, he recalls, required first exporting the points from Cyclone into a .pts file, then importing that file and converting it to its own file type, which somewhat decimated the point cloud.

“There were many steps involved. If you had too much data in the point cloud it was very easy to crash the program when you were drawing, which was a big frustration.”

Map360 enables Norris to import the point cloud file directly from Cyclone’s Model Space view in any size he chooses, without decimating it at all.

Recently, Map360 incorporated the .lgs file format, which refreshes very quickly. “It has a lot of good detail, it is very useful,” says Norris. He often starts work on a scene reconstruction by importing a point cloud, then drawing walls and other items, mostly in 2D.

“However, I will utilize 3D perspectives that I got from Cyclone, label them, and use them as a diagram as well,” he points out. Some of Map360’s tools—such as the ability to rotate a cursor, the evidence marking routine, and the align and scale functions—greatly increase the speed and accuracy of his drawing. 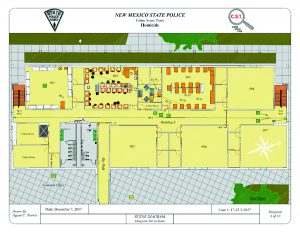 Using Google Earth (above) and Map360 (below), agent Clint Norris of the New Mexico State Police reconstructed the scene of a school shooting (crime location and names have been deleted). 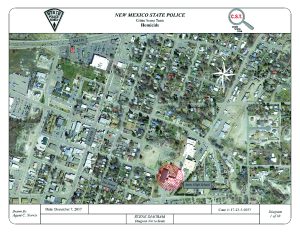 Tools in the Field

Currently, NMSP uses a Leica ScanStation C10 3D scanner to collect data in the field. Norris hopes to get his agency to upgrade to the Leica RTC360, which he’s had an opportunity to use. “That is almost a must-have in the future, just because of how quickly it scans, how easy it is to use,” he says. In the meantime, however, he finds the C10 to be an accurate and necessary tool.

One of the great advantages of scanning a scene, Norris points out, is that you often don’t know until later what data you will need.

“That is the nature of crime scene investigations,” he explains. “When we get there, the information that we are initially given is incomplete because the investigation is ongoing. Sometimes it is inaccurate because there is still a verification process.”

Often, it is not until his team is writing a report and finalizing its products that it realizes the importance of some part of the crime scene to which it had not paid much attention, in terms of photographs or measurements. “So, scanning has become almost an absolute necessity on these major scenes.”

After scanning a scene, Norris and his colleagues register it, regardless of which diagram program they are using. In addition to Map360, which only Norris currently uses, they primarily use two programs: an outdated version of CrimeZone, which can import point clouds, and SmartDraw, which cannot.

“So, we use Cyclone a lot, regardless of whether we use Map360 or another program,” says Norris. Some of his colleagues use REGISTER 360 to expedite the registration process. “That has been a big help since we’ve been using it over the last several months.”

Diagrams, once created, become part of the team’s reports. As the case comes to trial, if Norris performed the scanning and created a diagram, he is usually subpoenaed to testify in court, where he might be asked questions to varying degrees of detail on the scanner.

“Sometimes,” he says, “it is a simple matter of describing it as ‘an instrument that uses lasers to plot 3D points in space to create a virtual scene.’ Other times, it may be a little bit more in-depth in terms of how many points there might be in any given set of scans or more on how it takes those measurements.”

Next, he will be asked to describe his diagrams. “Rarely a scene can be adequately depicted in just one overall diagram. I will have an overall view of the general location in, say, a Google Earth view, then my overall drawing will put everything in context. Depending on what I need to do to better show different locations, I will have as many diagrams as I need.”

Another strength of Map360, Norris points out, is the layout tabs that it employs, enabling the user to create as many diagrams as needed.

“In the past, if I wanted five diagrams, I had to create five different drawings to get those diagram perspectives. Now, it is just the one drawing and I can create as many diagrams as I want through the layout tab.” That was a very big benefit, Norris recalls, in December 2017, following a school shooting at a high school near the Four Corners area in Aztec, New Mexico. “I prepared a total of ten diagrams for that case.”

Map360 users can choose from a library of stock templates or customize them to create their own. Norris, for example, has a template for his agency so that all the elements of his report are uniform.

“I will prepare as many diagrams as necessary to adequately and clearly document and illustrate the scene,” he says, “whether it be evidence items or the positions or orientations of furniture, vehicles, or even bodies if we have victims on the scene.”

The ability to draw to the point cloud helps him document the locations and orientations of bodies, which he depicts using stock body symbols. “I can trace the body, but don’t need to show all the gruesome details. I find that to be very accurate and compelling, without being prejudicial, which is a big thing when it comes to getting evidence in before a jury.” Sometimes, he points out, photos can be disallowed by a judge because they may be overly prejudicial according to the defense. “To date, I have never had a diagram not entered into the evidence.”

In addition to drawing 2D diagrams, Norris and his colleagues often use 3D snapshots from Cyclone to show important perspectives of a scene. “I can orient to that perspective in Cyclone, take that snapshot, bring it into Map360, label it, and do whatever I need to emphasize the point that matters most.”

Hoping to upgrade his team’s equipment to the RTC360 laser scanner, which can generate a registered point cloud on the scene, Norris looks forward to incorporating georeferenced photographs of key evidence with a compact, portable device. This would enable him to “give people more information about the nature of the scene sooner.”

For instance, he says, in a shooting involving an NMSP officer, the chief, two deputy chiefs, and a variety of command staff (majors, captains, and lieutenants) typically become involved. Rather than having all of them visit the scene—risking that one of them might inadvertently change or contaminate it and diverting them from other tasks—an RTC360 would enable him to quickly provide an accurate 3D point cloud with photographs of key pieces of evidence. “It helps to protect the integrity of the investigation.”

Norris also anticipates being able to use Map360’s evidence marker routine much more. “It is more than just a convenient and helpful way of marking evidence on a diagram,” he says. “The true power of it is that you can link aspects of the evidence or scene into a PDF format.

“So, if I am marking, say, a weapon, I can attach to a PDF report a photograph I took of that weapon and descriptors or other PDF documents.” For example, blood stains documented in the diagram can be linked to a lab report. Then, that PDF report can be shared with district attorneys, investigators, defense attorneys, and whoever else needs it, giving them a much better idea of the evidence at the scene and its role in the overall investigation.