Recognizing that with the right equipment and practices, specifications for ALTA surveys can easily be met, surveyors have rapidly adopted UAS for these and many other types of surveys.

The adoption of UAS in the surveying profession has been more rapid than some past tech. It was only 2016 when the FAA Part 107 mechanism for private small unmanned aerial systems (sUAS) operations went into effect, and now you’ll be pressed to find a surveying firm that has not entertained the idea of a drone program, if they haven’t already started one.

In this article and subsequent installments, we’ll hear from surveying professionals that are using UAS for a variety of work, with a focus on ALTA surveys. ALTA surveys are a prime case study of UAS use in surveying. ALTAs are a common type of work surveyors do across the country, and it is the closest thing there is to a nationally adopted set of surveying specifications, that ironically originated in the private sector (i.e., the American Land Title Association).

For those unfamiliar with ALTA Surveys, this is a specific type of land title survey, common in the U.S. for real estate transactions, and may be requested by title companies or financing parties involved in such transactions. It is a detailed land parcel map, “showing all existing improvements of the property, utilities, and significant observations within the insured estate. The survey also details the licensed surveyor’s findings concerning the property boundaries and how they relate to the title.” There are published ALTA standards (www.nsps.us.com/page/2021ALTA), that include for instance a relative positional precision of 2cm+50ppm 2σ for many of the features surveyed and included in a requisite map.

Such precisions had traditionally been achieved with conventional terrestrial surveying instruments, and/or (where appropriate) GPS/GNSS, but also could be met with manned aerial surveying. In many ways UAS is simply a miniaturization of these aerial technologies and procedures. But of course, you do the boundary part of the ALTA survey with conventional surveying instruments; the UAS is used for the topo/mapping portion. 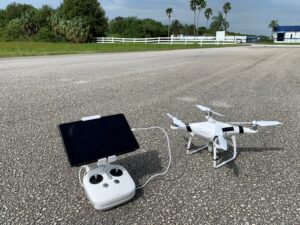 Unmanned aerial systems are finding their way into the kits of many surveyor firms because of their accuracy and versatility.

“Steel tapes to GPS and laser capture,” says Blair Ellison, UAV program manager at Weihe Engineers. He notes that while the tools we use change, finding balance is always key. “There’s the old saying that for a guy with a hammer, every problem looks like a nail. The idea is to have all the tools that you need to do all the different jobs that you could possibly encounter and use the right tool for the right job.”

There are dual hazards in evaluating new tech: one is trying to fit square pegs into round holes; trying to make it do everything. The other is not leveraging it to its fullest potential, getting bogged down in legacy assumptions, or going cheap and getting poor results.

Ellison and Weihe had been using aerial surveying and photogrammetry for many years prior to starting a drone program; this meant they had many of the practices worked out and had a good idea of when such technologies could be appropriately applied. Many firms we interviewed also have the benefit of a similar foundation in aerial photogrammetry but starting from scratch is not a barrier to entry—not as much as it used to be.

“I think it will be a standard tool for surveyors in general, including ALTAs,” says Derrick Westoby, UAS program lead at PBS Engineering and Environmental. “And I think that having the option to utilize UAS will be essential to stay competitive on some projects. UAS mapping has gotten a lot easier than it was six years ago but getting to consistent SURVEY level results is still challenging enough that people should be ready to commit to learning the process if they’re planning to handle it in-house.” 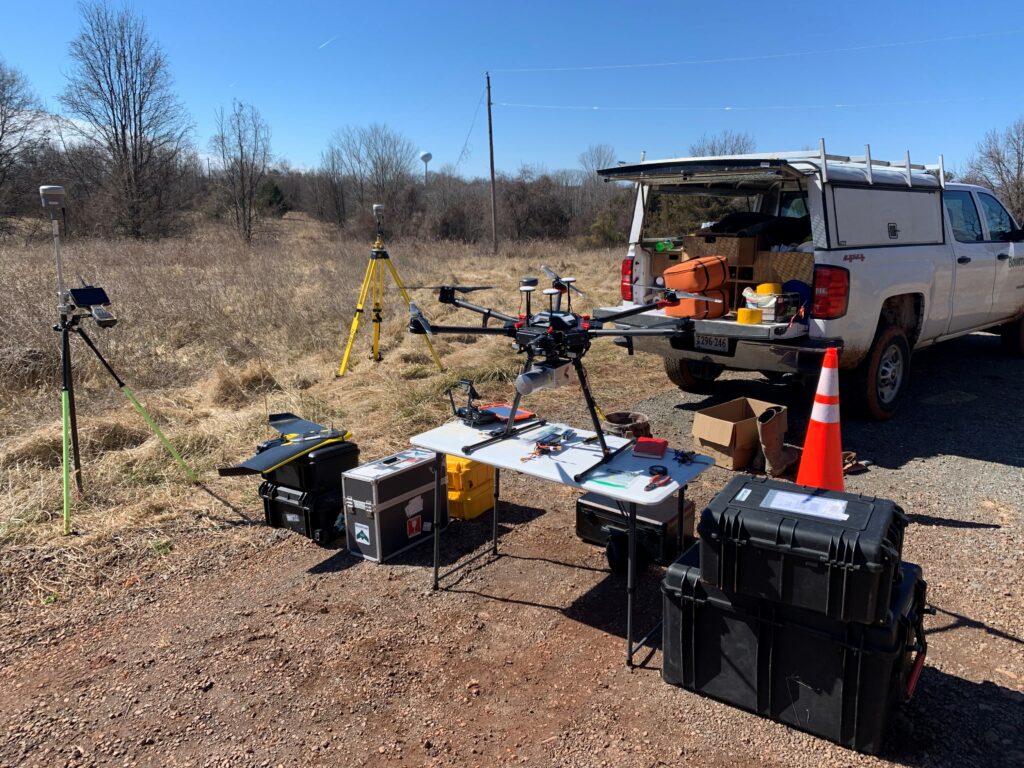 Westoby adds that it doesn’t mean each survey firm needs to have a UAS program in house. “We regularly perform UAS flights for other AEC firms, both small and large, including direct competitors,” he says.

Westoby and Ellison both cautioned against jumping into UAS without doing your research. “If you’re hoping to just buy a drone and spend a little time here and there learning it as you go, your long-term chance for success is going to go down,” says 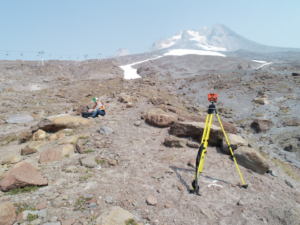 Unmanned aerial systems can be ideal for ALTA surveys in rural areas or tough terrain, like Mt. Hood in Oregon.

Westoby. However, he notes that things are changing, and that in perhaps five years, survey level UAS mapping might be turn-key.

“It’s relatively simple to get quality orthophotos and 2D planimetrics nowadays,” says Westoby. “3D is where most of the hurdles start.” Ellison is frank in his advice to UAS beginners: “If someone is asking me ‘where can I get a $900 drone to go out and start doing ortho mosaics and point clouds and stuff,’ they are barking up the wrong tree. If you are having to ask those sorts of questions, I don’t know if I want to facilitate your entry into that part of the profession.” Flying and capturing photos is the simple part. Planning, post processing, and extraction takes training and a great deal of attention to a myriad of details. If you turn any of that responsibility over to a service provider you lose a great deal of quality control.

It should come as no surprise that every survey UAS practitioner we interviewed gave the same advice: If you have a great camera and fly at the right altitude, you get the right ground sampling distance—that’s really the key to accuracy. The limits of accuracy are relative to height flown, and these experienced operators typically fly at 100 to 150 feet to get a three quarter of an inch to one inch pixel—the minimum to begin to meet ALTA standards.

But it is about more than just pixel size. There are other procedures that these surveyors follow to ensure standards are being met. This can include the pattern for the flights, and QA/QC steps.

“I am confident in our UAS workflows and the accuracies we can achieve, but only because we require check shots for every survey,” says Seth Gulich, UAS program manager at Bowman and adjunct lecturer for surveying engineering at Penn State University. “They also need to be a variety of horizontal and vertical shots. The vertical checks need to be in vegetated as well as non-vegetated areas. Just like how traditional field crew members always check their work as they go, UAS work needs to be looked over to ensure any required accuracies are being met.” We’ll expand on QA/QC in next month’s article.

Photogrammetry and/or lidar? While photogrammetry has been predominant for most UAS surveying, lidar has rapidly caught on. When asked specifically about ALTA surveys, most firms said photogrammetry is the go-to, but that there are advantages to lidar under certain conditions.

“At a minimum, we are flying photogrammetry. Depending on the terrain or improvements on a site, we will also fly lidar,” says Gulitch. “We tend to use lidar on some larger sites, 40 acres-plus, where photogrammetry isn’t ideal for elevation data in some environments with overgrown fields, wooded areas, and sites with large terrain relief.” 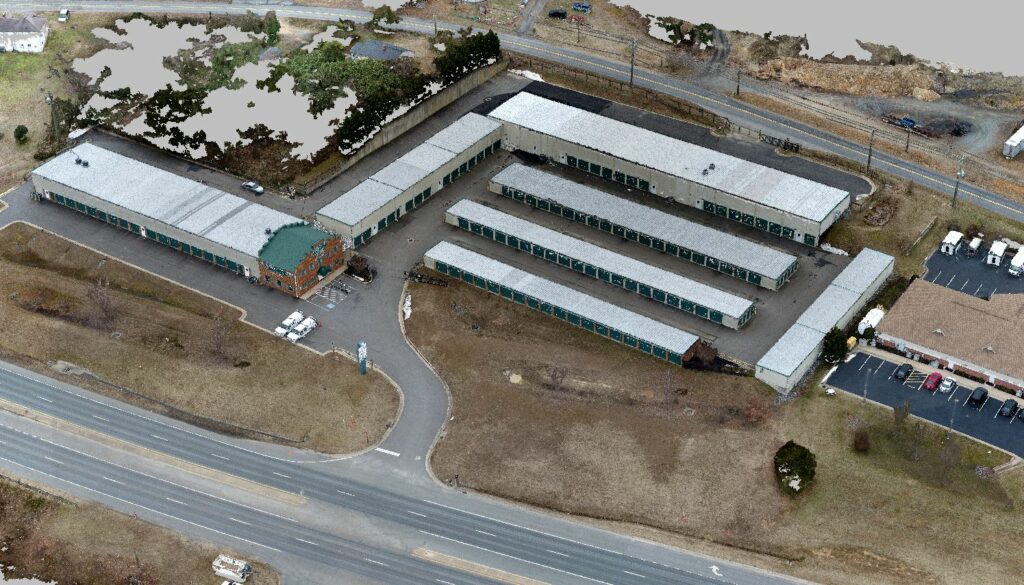 Gulitch and others say that photogrammetry is where they see the most value for the effort they put in. It can supplement elevation data for open areas as well as provide horizontal locations for 80 percent to 90 percent of the improvements that need to be on the ALTA map. One of Gulitch’s favorite examples is shopping center ALTAs. Sometimes they’ll fly it just to save the time on the hundreds of parking spaces, making sure they get the paint markings right. “Another great example where photogrammetry is helping us with ALTAs is when we have sites with underground utilities marked out,” says Gulitch. “When you have an aerial image showing all the paint marks, it starts to make a lot more sense for the technicians in the office.”

Eric Shirley, project manager at Machine Control LLC says lidar helps with many of the sites his company surveys in Central Florida, where there is a lot of light tree coverage. Shirley notes the steep price of entry into lidar though. “To get an efficient setup with lidar, you might be looking at $100K or more,” he says. “But if you regularly have projects that are 20 acres to 50 acres, versus demand time on the ground, you can really start to see the savings roll in.”

Many who had traditionally only used photogrammetry are giving lidar a look. “We have been using photogrammetry since 2016 (our UAS program was started a month or two after the FAA’s Part 107 went into effect),” says Westoby. “Prior to that, PBS Survey was already using manned photogrammetry for large ALTAs, wind farms, solar farms, etc. We’ve had terrestrial lidar for a few years now and just started doing aerial lidar this year.”

Key takeaways from interviewing surveyors who have been successful in using UAS to yield efficiency gains for ALTA surveys is that you need to have a well-thought-out and executed UAS program. Get the best camera for the dollar, follow best operational practices, use at least some ground control points (GCP), have a QA-/QC program—that must include some manual check shots, and use a processing workflow that may include some automated feature extraction. We’ll examine these topics further in subsequent articles.