A memoir of the field, family, friends, fortitude—and fun

Anthony “Tony” Vetturelli’s recently published memoir, Land Surveyor – Journey, Challenges & Destiny, is a fascinating personal journey, a life-long passion for surveying, and a first-hand chronicle of a particularly impactful epoch in the history of surveying.

It’s the story of a kid who immigrated from Italy, alone at the age of 10. It tells of his loving and supportive adoptive family, growing up in upstate New York, trying his hand at a variety of jobs and pursuits (including some gambling and pool sharking), and his travels and development of lifelong friendships.

It was a job with a municipal water department that first exposed Vetturelli to surveying, and it was like an epiphany—he had found his passion. Relocating to California where surveying was in a boom cycle, he met the love of his life, and together they raised a family and built a home.

While there are a number of notable books authored by surveyors from historic times, it is rare to find a contemporary memoir like Vetturelli’s. His 41-year surveying career spanned an era where the population of the country nearly doubled—that added up to a lot of development. This presented a lot of opportunities to learn and master many aspects of surveying; Vetturelli never shied away from learning something new. He also experienced the transition from analog to digital and thrived on these changes. 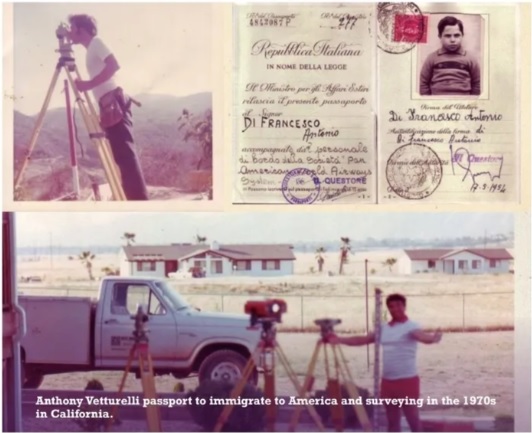 Anthony Vetturelli passport to immigrate to America and surveying in the 1970s in California.

I recently spoke with Vetturelli, and he explained his take on change in surveying. “Some of my colleagues, when programmable calculators came along, they didn’t want to have anything to do with it,” says Vetturelli. “And some left surveying. I was the other way around. I want to learn more and more, to stay up on the latest. I do this for my family and my company.”

This eagerness to learn more, and willingness to take on any surveying task gives Vetturelli a particularly broad base of surveying experience. But in writing the book, he realized that many of his friends and colleagues may not have been exposed to as many types of surveys. So, he has added in appendices, and interspersed throughout the book, explanations that both surveyors and non-surveyors can understand and appreciate.

In the last half of the 20th century, and early decades of the 21st, the housing and development booms and busts molded the modern American surveying profession. From surveying subdivisions to commercial buildings, to a giant reservoir project, construction of a famous resort, and then 11 years in the state highway department, Vetturelli’s surveying experiences in Southern California perfectly capture this era.

Another takeaway from this book, that I hope could inspire young surveyors, is Vetturelli’s pure love of surveying, no matter how mundane the tasks. Something I fear our profession is losing is the full appreciation of all aspects of surveying.

There seems to be a laser focus on licensure as the singular yardstick by which the state of the profession is measured. Vetturelli did not seek licensure, he found life-long career fulfillment in the day-to-day aspects of surveying. Mastery of so many aspects of the profession, natural ability to get along with people, and general affability, lead to many leadership roles. Such was an era where many paths in the profession were encouraged and celebrated, the apprenticeship path in particular.

What inspired Vetturelli to write the book? In addition to encouragement from friends and family, he shared the anecdote of what finally set him on this course.

“I went to get some financial advice and got talking with the advisor. I like to talk. I’ve been told I tell a good story and like to do so with a lot of humor,” said Vetturelli. “An hour and half later, she said that I had an interesting career and life and that I should write about it; that was the encouragement I needed.” 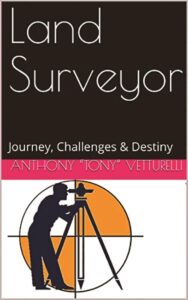 The book took two years to write. While Vetturelli had been telling himself to write down some of his experiences throughout his career, he said he mostly forgot to take notes. So, he had to recreate parts of his story and timeline with the help of family, friends, and colleagues—and he has many that he has kept in close touch with.

Vetturelli jokes: “I had to tie my hands while writing so I wouldn’t talk with my hands,” a nod to his Italian heritage. Indeed, one of the great joys in reading his book is that it is written in a very accessible, conversational style. When I interviewed Vetturelli, he spoke with the enthusiastic Italian-American-upstate-New York-Southern California style I had imagined when reading the book. His friends and others who have read the book all agree.

His goals as an author? “I think mainly to inspire others, and to chronicle for my sons.” Agreed, this of course would be a good read for surveyors whose careers spanned the same era, but more important, could be a great read for young surveyors.