This entry is part 5 of 7 in the series Heights 2015
Above: Hybrid multirotors such as the FireFly 6 are offering solutions to common problems, allowing automated takeoff and landing along with waypoint flight control. Credit: Jon Barnes, Bajora Media.

What are they doing for the UAS industry?

Being an entrepreneur is a lot like being a surfer. You need a surfboard and access to the ocean, along with the ability to see a long distance. Imagine seeing a huge wave coming, getting set up to ride it, and finding out that there’s a regulator out there keeping that wave from getting to you or diverting it so only professional surfers can ride it.

For entrepreneurs in the UAS industry, how do you make sure that regulators have your interests in mind?

Under the FAA Modernization and Reform Act of 2012, P.L. 112-95, Congress directed the Federal Aviation Administration (FAA) to integrate unmanned aerial systems (UAS) into the national airspace by September 2015. Part of that integration directive was for the FAA to clear the way for the commercial use of UAS by 2015. On February 15, 2015, the FAA promulgated a draft set of rules for the commercial use of UAVs in the U.S. airspace. Before the rules can be set in stone, the FAA wants input from potential users. The draft rules can be accessed at regulations.gov with reference docket # FAA-2015-0150.

The text of the act puts safety at the forefront of concerns. However, the act fails to address significant legal issues such as privacy, trespassing, and ownership of navigable airspace. The upcoming regulations need to weigh the Fourth Amendment’s prohibition against unreasonable searches and seizures and the implied right to privacy against the First Amendment right to gather, receive, and disseminate news.

There will likely be at least a 12- to 18-month process to receive the public comments, evaluate them, and craft the regulations.

At this time, the FAA has an advisory committee dealing with the issue of small unmanned aerial systems and their integration into the National Air Space (NAS). Anyone interested in the future of UAS should know who the members of the committee are. At the moment, Boeing, Cessna, General Aviation Manufacturers Association, Sikorski, Rockwell Collins, GE Aviation, and Gulfstream are major players in the world of aviation and the advisory committee. In addition, the Aircraft Owners and Pilots Association serves on the committee. These all represent large, manned aircraft companies and licensed pilots.

Manufacturers of both military-grade and small UAS, along with businesses that perceive a threat to their income, are lining up to try to influence the outcome of the FAA’s regulatory process. Both the House and the Senate have formed unmanned systems caucuses. “Over the last four years, caucus members have drawn nearly $8 million in drone-related campaign contributions,” according to an investigation by Hearst Newspapers and the Center for Responsive Politics. The Motion Picture Association of America spent more than $4 million lobbying in 2012 and 2013.

Those dollars, primarily provided by unions, large companies, and large associations, garner a great deal of access and influence in the legislative and regulatory process. With the wars in Iraq and Afghanistan winding down, the larger manufacturers such as Boeing, General Atomics, Northrop Grumman, and Lockheed Martin are looking to the future to ensure that they can continue to have a part of the emerging markets for sUAS. It has been reported that General Atomics received an order worth more than $197 million from one country to buy their Predator drones. Replacing that volume of dollars with sUAS will be a challenge.

Entrepreneurs and small business owners often feel their interests are not shared by regulators. Businesses that can’t get a chair at the FAA advisory committee table are now creating coalitions to get their voices heard by the regulatory and legislative community. The groups seem to be breaking down more along the lines of the size of the aircraft and the application rather than the size of the business.

For example, 3D-Robotics, Parrot, DJI, Airware, Amazon, Google, and GoPro have joined to create one coalition, the Small UAV Coalition. These companies are manufacturers of UAS and software and are pioneers in product delivery. They believe that U.S. leadership in the research, development, and production of unmanned aerial vehicles will benefit consumers from all walks of life.

Another sUAS group, The Property Drone Consortium, was started by Chris Barrow of EagleView Technologies. The members of this coalition focus on end users such as Allstate, other insurance carriers, construction and roofing industry companies, and other companies concerned with getting to use the technology sooner rather than later.

A large “dark economy” is developing around the use of UAS, according to Dr. Michael Hauck, executive director of the American Society for Photogrammetry and Remote Sensing (ASPRS). The professional surveyor market has long used satellite and manned airborne platforms for data acquisition. The geospatial profession is finding that UAS technology has the potential to revolutionize data collection and lower operating costs. To address this change, ASPRS has created a section in the association for UAS. 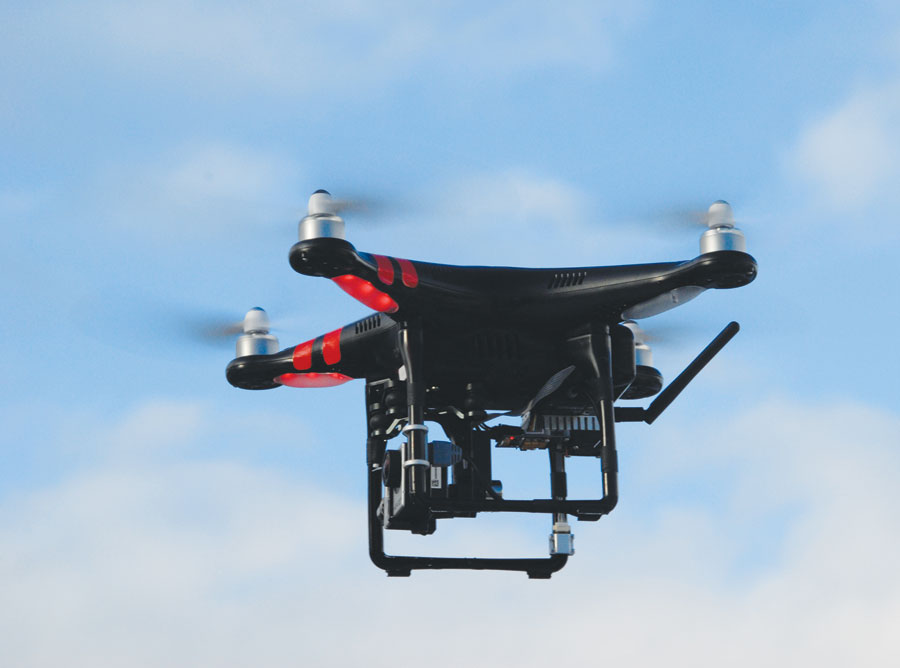 Phantom 2 on a photography mission.

Recreational users are not the only ones flying UAS; large business entities such as the movie industry have been granted what is called Section 333 exemptions. The exemptions allow the use of UAS for the filming of movies on closed sets. In addition, four companies that received exemptions want to fly UAS to perform operations for aerial surveying and real estate, construction site monitoring, and oil rig flare stack inspections. (For more on Section 333 exemptions, see xyHt’s March 2015 issue.)

Referring to exemptions granted by the FAA for the use of UAS, the Wall Street Journal reported in January 2015, “In many of those exemptions, the Air Line Pilots Association, the biggest U.S. pilots union, and the National Agricultural Aviation Association, a trade group for crop dusters, helped persuade the FAA to place tight restrictions on the drone flights, including requiring operators to have pilot licenses and to keep the devices within eyeshot.

“For several exemptions, the FAA agreed with the crop-duster group’s recommendations to require operators to file notices with local aviation authorities two days before flying and to display identification numbers on their drones. The group urged the FAA to also require bright paint, strobe lights and transponders that broadcast the drones’ location to other aircraft, but the agency declined.”

It appears that the FAA is going to be receiving guidance from select groups: members of the advisory committee, coalitions or associations, unions, and lobbyists. At least four Washington D.C. law firms have set up practices dedicated to UAS in response to client interest. In addition, companies such as Amazon, Boeing, and Northrop Grumman have staff lobbyists. With literally millions of dollars being spread around by these companies and lobbyists, they will have a major influence on how the rules are written.

In 2014 about 35 coalitions, companies, universities, and municipalities reported lobbying on UAS. Even the American Civil Liberties Union is participating in these discussions. Patrick Egan of sUAS News points out in an online article that these lobbying efforts have worked well to regulate 10-year-old aviation technology; however, they may not be the best or most responsive tool to regulate a rapidly evolving industry.

Are you ever going to be able to take advantage of this new and rapidly changing technology? Will you be excluded from this potentially multi-billion dollar industry, or will you get in on the ground floor? Will your UAS be a fun machine that can’t be put to work because you can’t afford the commercial pilot’s license the FAA said all operators must possess? Will your only market be overseas for the next two to three years while you wait for the FAA to make up its mind? 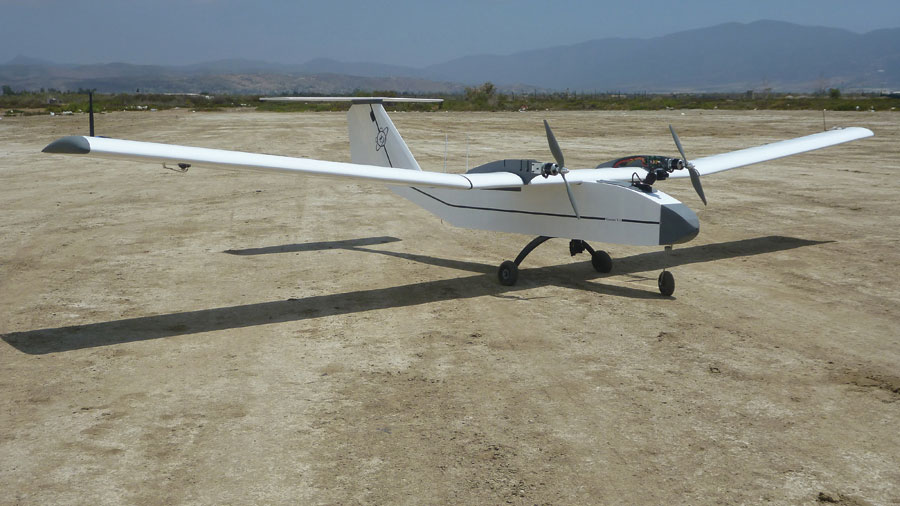 The Gemini long-range RC airplane can fly more than 40 miles autonomously while carrying a three-pound payload for two hours. First-person view on a ground-controlled gimbal allows a full 360-degree view of the operating environment in addition to the belly-mounted payload camera.

The Association for Unmanned Vehicle Systems (AUVSI), an Arlington, Virginia-based trade association, has spent about $1.2 million since 2007 lobbying on behalf of UAS companies. They forecast that the industry will create 100,000 new jobs and $82 billion in economic impact over the ten years following FAA rule promulgation. Their members range from the often-mentioned Boeing Company to Abu Dhabi Autonomous Systems Investments, LLC. Are they representing your views and positions?

One of the most overlooked benefits of a trade association is advocacy. When you become a member, you have an organization dedicated to protecting and advancing the needs of your industry. Having a dedicated team to lobby and advocate on your behalf is powerful. The cost of association membership is less expensive than either trying to hire a lobbyist yourself or taking your own time and money to lobby directly.

Having spent seventeen years managing trade associations, my experience shows that those who participate influence the direction of the industry. As a PowerPoint presentation by AUVSI shows, AUVSI all but wrote the FAA bill. “Our suggestions were often taken word-for-word,” it says.

When choosing a group to join, consider: Will this coalition or association listen to my specific needs? Can I afford to volunteer time to help shape the thinking and direction of the organization? What will be the outcome of the actions of the coalition?

Being directly involved is critical to survival in the U.S. marketplace, particularly as the FAA and other regulatory entities shape the future of this industry.

The DroneCenter of Bard College in Annandale, New York, has listed 31 questions they think the FAA wants you to answer. They have included references to the pages of the proposed regulations for inclusion with comments.

Critical issues are included such as visual line of sight versus FPV; requirement for an observer for all flights; is 500 feet above ground level too high or too low; should drones be allowed to fly at night; and what testing and knowledge is reasonable to require for the pilot. According to the FAA, “The most helpful comments reference a specific portion of the proposal, explain the reason for any recommended change, and include supporting data.”