There is a growing ebb in the tide of UAS adoption for aerial surveying, mapping, and remote sensing—finding the right balance between manned and unmanned aerial operations

A decade ago, there was widespread skepticism over a drone’s viability for surveying, mapping, and construction. In the ensuing years, the unmanned aerial vehicles (UAV) these systems are based on—small, fixed-wing, multi-rotor, and vertical takeoff and landing (VTOL). Now, here we are, an eventful decade later with the needed civil aviation rules in place. UAS are nearly as ubiquitous in the toolkits of surveying and mapping firms as GNSS rovers and terrestrial gear.

The potential to adopt UAS for existing and new applications seemed limitless, and growth in their use seemed unstoppable. It was almost as if there was nothing that drones could not do. Indeed, they have delivered in many more ways than anyone could have imagined a decade ago, but not across the board. It is important for operators—and customers—to understand when to use one or the other.

“Manned operations have been a pretty consistent industry for many years,” says Blaine Horner, market director of geomatics with Merrick & Company. “I would say that there are some new buyers of manned data, and ones that originally got into the market because of the drone hype, learned the limitations of UAS capture, and started doing manned capture. This is why there are multiple firms that were established as UAS companies that now do as much or more manned collection than they do UAS collection.”

Horner added that for wide-area collection, the proposition would be similar, balancing between mobilization cost and capture efficiency.

The time window needed to capture data can be a prime consideration. For transmission line corridor lidar capture, Horner says, “This work is primarily done to measure the sag of the lines. This is done by capturing weather data and power flow information during capture, then associating this with the sag amount. With the slow rate of capture with UAS, you end up having data captured over a long time, and the base sag model could vary a lot.”

This is also true for multi-spectral work. Horner says, “I’ve had some nightmares trying to work with UAS multispectral data, which was collected over several days; healthy vegetation on day one looks the same as unhealthy vegetation on day two, etc. You can eliminate this problem if the entire study area can be captured in a small amount of time. So, I would say multispectral data from a UAS is not useful for areas over say 75 acres.”

“Our demand for mid-range projects has remained strong,” says Nathan Eick, lidar products manager at Aerial Services, Inc. “In general, it is difficult to outweigh the advantages of large aircraft/payloads with today’s computational architecture. Those large aircraft/payloads do exceptional work at low altitudes with their exceptionally accurate INS and calibrations.”

Eick says multiple key factors must be considered to find break points between manned and unmanned:

But for 100 square kilometers, Eick explains, “Things generally scale linearly for UAS, albeit there’s some time for moving the remote pilot in command to maintain visual line of sight. Now we’d have approximately 1,500 km of flight lines to acquire.” With a multirotor UAS at 20 mph, that’s 42 hours of raw flightline time, not including takeoff or landing. Eick says that with an average of no more than five hours of flightline flight per day, eight days with good weather (sun/cloud coverage and low-enough wind) would be needed to collect. 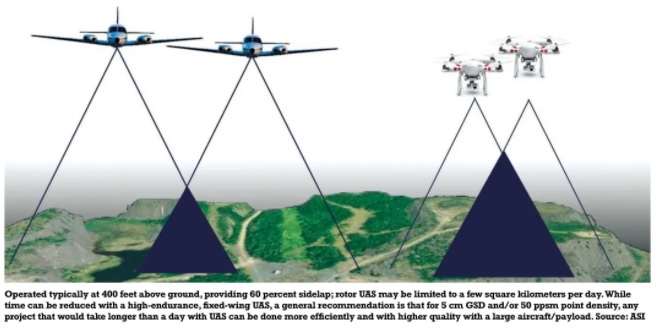 High-endurance fixed wing UAS can offer another proposition, says Eick. “At 40 mph, that could be reduced to 21 hours of flight time. Considering the advantages of higher wind tolerance, longer visual line of sight, and fewer missions with longer endurance, we maybe could count on seven hours per day, resulting in three days instead of eight with a multirotor.”

Eick concludes that: “With all of that data, our general recommendation for 5 cm GSD and/or 50 ppsm point density, that takes more than a day to collect with UAS, it’s often more efficient and higher quality to collect with large aircraft/payloads. It’s also a significantly faster to process and turnaround to clients. Extrapolating the data comparison for a 100-square-kilometer project, we can see that a multirotor UAS daily coverage might be around 10 square kilometers. A high-endurance fixed-wing UAS may be around 30 square kilometers.

The Vast and the Remote

Founded in 2016, Alietum is riding the wave of UAS adoption. Based in Yellowknife, Canada, the firm garnered a reputation for innovative applications using UAS, serving clients in government, mining, natural resources, construction, and more. The vastness of Canada and remoteness of many of the company’s projects contributed to the realization that UAS alone would limit growth of the business.

The UAS boom did not create the global boom in geospatial data being captured. There is simply a greater appetite for it, and the processing and application-level capacity to ingest more than ever before. There is more aerial data capture happening with UAS of course, but also for large scale, and rapidly growing in mid-scale applications. Innovation in integrated solutions and systems has boosted efficiency for all the above.

No, your drone can’t do it all, but manned alternatives are now more affordable, efficient, simple to operate, and are rapidly gaining a new wave of practitioners.