This entry is part 6 of 80 in the series Pangaea

Where streets have no names, confusion creates geo biz opportunities.

Those of us in the business of mapping take pride in our wayfinding skills. Yet, on a recent trip to Florence, I found myself searching aimlessly for my hotel in the city’s medieval street layout. Something was definitely wrong when I ended up between numbers 51 and 101 in via Faenza. I was lost.

At first glance, the door numbers in this beautiful Italian city don’t seem to be coherent. Numbers are either repeating, or worse, missing. Adding to the confusion was my smartphone’s navigation app that kept directing me to a different location.

Slightly off course but undeterred, I managed to reach my hotel after soliciting help from locals. Surely when both wayfinding skills and technology let us down, it’s smart to politely ask around for directions.

Geocoding Is a Clue

Getting lost in the streets of Florence reminded me of the importance of geocoding as we depend more on our gadgets to bring us to our desired destinations. Geocoding, or the process of transforming street addresses into GPS coordinates, is the computational backbone behind the success of geo-location applications such as Google Maps, OpenStreetMap, Mapbox, and TomTom. However, despite the high demand for location information, geocoding is far from being spot-on.

Why? Geocoding works well only in places with a logical address system, something that Florence and most older cities do not have. Although authorities in Florence follow the traditional way of assigning unique and ascending numbers to each building (using odd and even digits on either side of the street), there is a little quirk.

Take a good look at the picture that I took (above) and you’ll see that number plates have different colors: blue for residential buildings and red for businesses. This unusual numbering system leads to an overlapping and recurring series of numerals within the same street, creating a challenge for geocoding programs and confusion to first-time visitors.

The case of Costa Rica is even more complex because, until recently, they don’t have street names. Home and business addresses were arbitrarily written by combining cardinal directions with an approximate distance from a landmark. My neighbors and I could write the same address as “200 meters south of the City Hall of San Isidro” even if we don’t live in the same house. Postmen and locals are expected to instinctively tell where the geographic North is, aside from knowing how to estimate distance. No wonder Waze has become a popular navigation app in that country.

In places where streets have no names and routes are unclear, confusion creates business opportunities for geospatial companies.

Take for example HERE Technologies, the mapping company that has become a serious (and affordable) challenger to Google Maps. You may have already used its geocoding capabilities and accessed its ginormous location database if you are an Amazon, Esri, or Garmin user.

HERE’s road mapping legacy, first as NAVTEQ in the 1980s and its later acquisition by Nokia Maps in the 2000s, has allowed it to assemble 55 million place names in 237 countries. It has also created a “self-healing” road map that automatically updates street-level information in near real-time using the driving trails of other vehicles. No more surprise fines for wrong turns in newly designated one-way streets!

Bringing geocoding even further is the London-based startup what3words whose wayfinding technology doesn’t depend on street names. It works by geocoding every 3×3-meter square grid of the globe with three English words. This approach replaces the long numerical string of lat-long coordinates with short and unique words that can be entered manually (or via speech recognition) into any smartphone or navigation system. The location of the xyHt office, for example, is ///heads.showed.book, a string of random terms that seem to describe our enthusiasm for the printed word.

What3words is now a $169 million global business that is used by several car companies and e-commerce sites as well as local emergency response services in the UK.

The what3words app geocodes every 3×3-meter square grid of the globe to enable emergency services, for example, to reach places with no exact address, such as a farm parcel. Source: what3words. 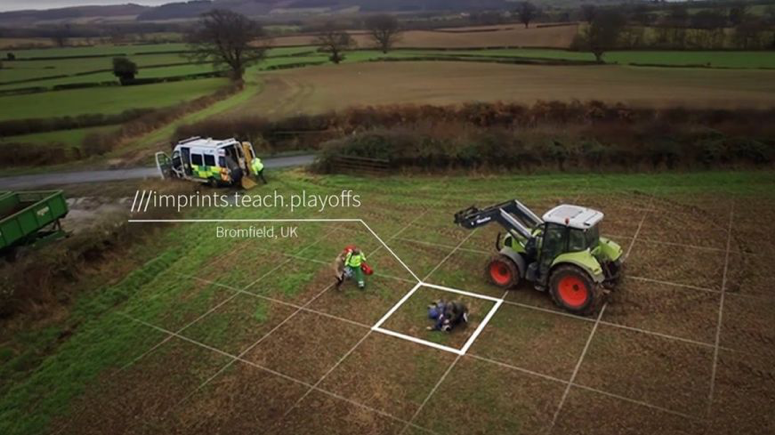 The what3words app geocodes every 3×3-meter square grid of the globe to enable emergency services, for example, to reach places with no exact address, such as a farm parcel. Source: what3words.

With a growing number of smart cities that rely on geocoding to manage infrastructure and traffic, as well as the popularity of food delivery and ride-hailing apps, the spatial analytics market is foreseen to reach US$ 88.3 billion by 2020. Future improvements in geocoding will come with faster computing, more accurate GPS sensors, and hopefully a better-organized address system. Clearly the first two are easier to achieve than the latter because reordering our addresses takes more time.

Until we put our whereabouts in order, the key point to remember while using any geocoding app is to stay mindful lest we go astray. Greg Milner’s well-received book on GPS navigation, Pinpoint, sums it best by citing several studies that show how people end up getting lost even when they use wayfinding technology just because they stopped interacting with their surroundings.

So by all means go out and use geocoding. But don’t hesitate to also ask for directions. Mankind’s oldest wayfinding tool still works and does not require batteries, only a bit of politeness.