This entry is part 7 of 80 in the series Pangaea

As you may recall from the last issue of Pangaea, this series is about my experiences using a prosumer-level UAS to explore the possibilities of starting an aerial photography business. Here’s what I learned.

As I described in the first article, my first launch of the Spark never left the ground due to a no-fly zone in my hometown. It seems that the local county sheriff’s office and jail is a mandatory no-fly zone, which makes sense. Researching no-fly areas and restricted airspace, I was shocked to see how many “airports” populated the airspace around my home. I put “airports” in quotes because the vast majority of these airports were ranchers’ airstrips that are unmanned and largely unused, but still count as airports.

How to get around this? The FAA’s LAANC (Low Altitude Authorization and Notification Capability) is a tool that directly supports UAS integration into the national airspace. It provides commercial UAS pilots with access to controlled airspace at or below 400 feet. The good news is that now the FAA has made this technology available to recreational UAS flyers in the NAS. Of course this news arrived after I had done most of my field work for this article, but it will be very handy going forward. Read more here.

Getting to Carnegie Hall

You may recall the old joke about how to get to Carnegie Hall? “Practice, practice” is the punchline. This is particularly applicable to learning how to operate a UAS and especially the post-processing of collected data. Since I was evaluating photographic and video tools, I was particularly interested in panoramas, including a technique called 360 x 180 spherical panoramas. I was also intrigued by the video tools the app offered: circle, helix, and “rocket” (here’s an example of a rocket video). I found the horizontal panorama tool to be the easiest to both take and process. The 360 x 180 spherical, which arguably packs the most visual punch, was more problematic. The data-collection part is easy enough, and even processing the imagery seems pretty straightforward. Displaying the resultant spherical imagery is my stumbling block for now. Practice, practice I guess. 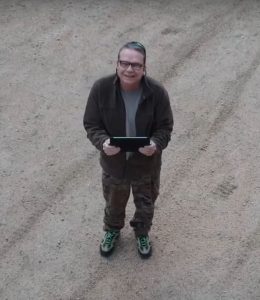 Learn to use the “oh sh*t” button

Capturing videos provided me with a valuable lesson. While testing out the helix pre-programmed video function I learned the value of the “stop everything” button, often humorously referred to as the “oh sh*t” button. Watch this short video to see why the OS button is so important. (Lesson starts at 32 seconds in.)

Last year my nephew, a real estate agent in the Midwest, told me about his plans to partner with a subcontractor who had both a UAS and a 3D Matterport scanner; I reconnected with him to see how this was going. He explained basically that the real estate market is so hot right now that he had little luck selling these services. My local sources say the same thing: they don’t, at this time, see the value in investing in UAS photography when homes are selling so fast—often above asking price—with so little effort. This may change as the market slows down. One exception seems to the very high-end multi-million dollar listings, especially the large acreage estates where aerial imagery have the most impact.

Ironically, the robust (in many places) real estate market drives demand for residential construction and, in turn, for UAS mapping services.

I intend to keep on practicing flying the UAS and learning more about the post-processing software (while having a blast!). For now, I’m holding off on any big investments on either a pro-grade UAS or obtaining Part 107 licensing until conditions improve or I decide to pivot into another market.

In October I’ll be attending both the PIX4D user’s conference and the Commercial UAV Expo. These events promise lots of valuable information in mapping, inspection, and other exciting UAS-based opportunities. I’ll be reporting back about what I learned at these two events.