Thus far in my “insider story” (June, July, August 2020), I’ve described how, while working for Trimble in 1996, I first became aware of the technology, which was then still in development. After a jaw-dropping demo, I dove deep into evaluating the technology and its pioneering start-up company, Cyra Technologies, for a possible partnership with Trimble. Cyra’s CEO, Ben Kacyra, was likewise evaluating Trimble as a potential partner to help commercialize his technology.

As I dove in, I checked off a couple of key boxes. One was that Cyra’s 3D scanning technology was being developed to solve an identified market problem. In this case, how to safely achieve fast, accurate as-builts that are critical to problem-free plant retrofit design and construction. Competing traditional, manual plant as-built methods were sometimes hazardous and often fraught with error. 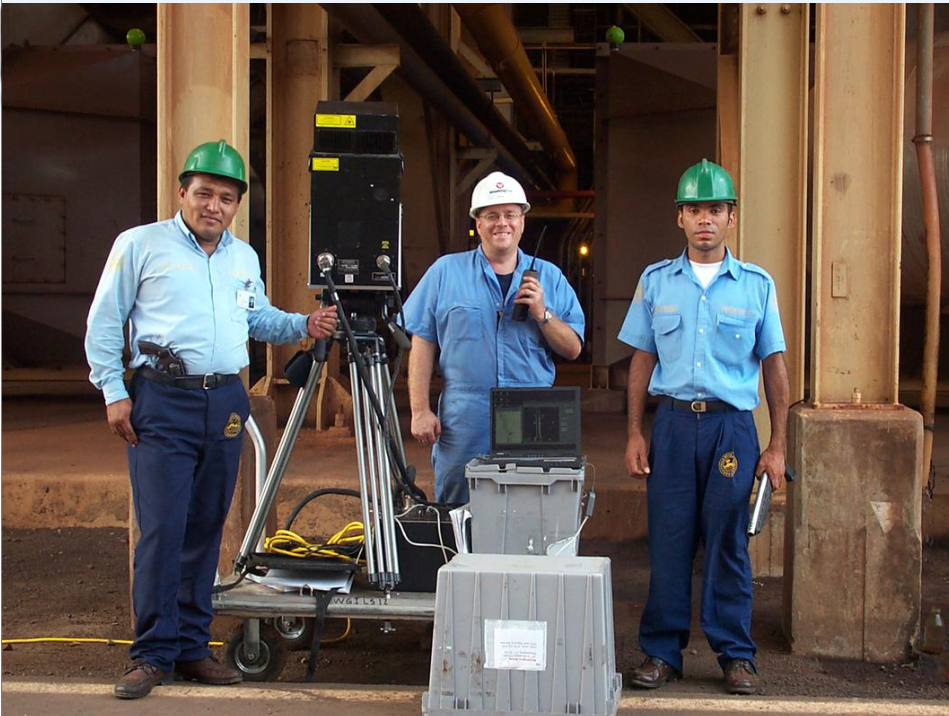 Yet another positive check mark was that the technology’s development was already at beta stage. Plus, Cyra’s four beta users were world-class companies—Chevron, Fluor Daniel, Raytheon Engineers & Constructors, and the U.S. Navy. My evaluation was looking good, but there were more key aspects to evaluate before recommending a partnership.

In the process of my evaluating Cyra and Cyra’s CEO evaluating Trimble as potential partners, Ben Kacyra and I were also evaluating each other.

Beta Users: Success or No?

Each beta user organization had not only committed to test Cyra’s laser scanner and point cloud software, but to also purchase multiple first production units for a tidy sum, if the beta system met its targets. Beta testing was ongoing over the course of the many months that Kacyra and I were periodically meeting for business lunches. Status updates were important. 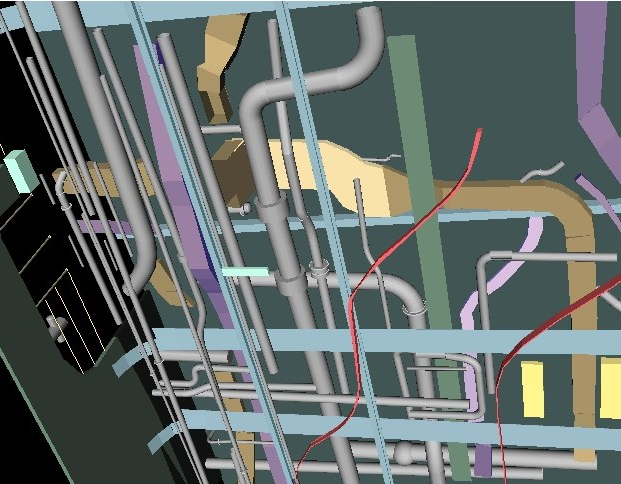 The U.S. Navy beta tested Cyrax on the USS Tarawa, producing this model from scans of partvent system in the well deck area. 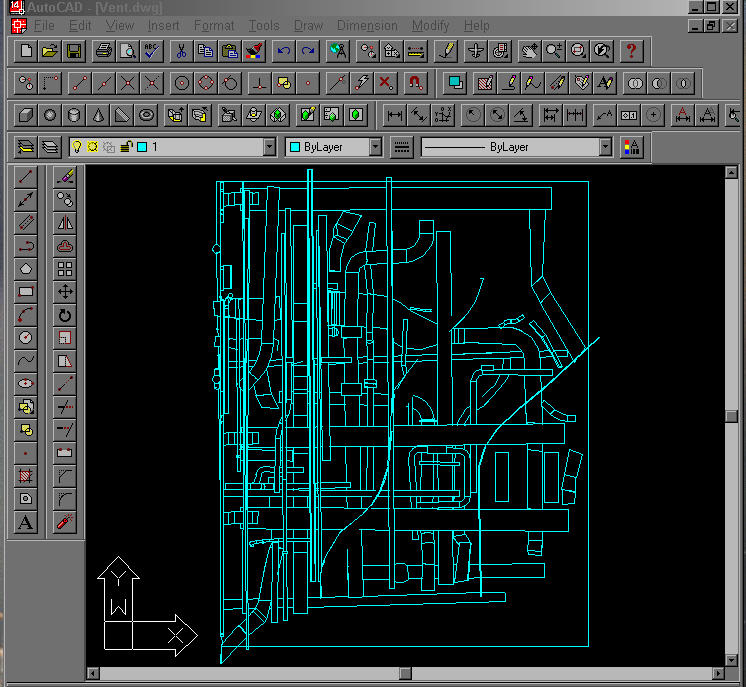 An AutoCAD point cloud image of the vent system in the well deck of the USS Tarawa.

Each beta user tested the system on actual projects and sites. There were bumps along the way, as expected with prototypes of such new technology. Overall, beta testing took longer than planned. For some projects, environmental conditions proved problematic. For the U.S. Navy, logistics of moving the bulky, heavy system around a ship were problematic. Nevertheless, by early 1998, each beta tester signed off.

Kacyra assesses the survey market …and me

Kacyra was keen to learn two key things from me. One was the size of the market for survey instruments. The second was the “DNA” of Trimble. He wanted insights that could give him a sense of Trimble’s suitability for bringing his technology to market.

I had to be very careful in addressing his interest in the size of the survey instrument market, as I couldn’t share confidential information.

Nevertheless, I was able to provide him with various bits of public information. For example, I was able to tell him about the number of licensed, professional surveyors in the U.S. This is public info for each state.
I was also able to give him a rough range of how many survey crews there might be for each professional surveyor in a survey firm or department. Each survey crew would have a total station and at that time I was able to give him a sense of what percent of survey firms had GPS, as published via land survey magazine reader surveys.

Partner with a Survey Instrument Company …or Not?

I knew of Trimble’s strategic desire at that time (1996-97) to add optical/EDM type of survey solutions to its product portfolio in order to strengthen the company’s long-term position in the survey market, but that was highly confidential, so I wasn’t able to talk about it. Nevertheless, it was a factor in my efforts to attract Kacyra to Trimble.

Another factor in my discussions with Kacyra was that he wasn’t convinced that partnering with a traditional survey instrument company was his only, nor necessarily his best, path for commercializing the technology. Why not? Well, his version of 3D laser scanning was focused on industrial plant as-builtsÑa market that was not a major focus of survey equipment vendors.

Moreover, it was obvious that software was going to be a big part of a 3D laser scanning user’s total solution. At the time, major survey instrument vendors were heavy on hardware and light on software. In contrast, one of the leaders in the 3D plant design software market, Intergraph, had already pursued its own version of close-range photogrammetry hardware and software for creating accurate as-built 3D models of industrial plants.

So, plant design software vendors—in fact all major CAD companies—were also potential strategic partners for Kacyra. He felt they might better understand the plant “as-built problem” and, thus, might be a more enthusiastic partner and better prepared to take it into the industrial plant market.

Trimble as a Potential Strategic Partner

At the top level, Trimble had very successfully taken “non-traditional” technology—GPS—into the surveying market. Survey was Trimble’s largest and most successful business and Trimble was number one in market share for the GPS survey market.

Characterizing Trimble from a DNA standpoint, I pointed to its core Hewlett Packard roots and similar culture, which, at the time was one of the envies of Silicon Valley. I also pointed to the company’s visionary culture, as Charlie Trimble, Trimble’s CEO and founder, boldly touted GPS as the future “Eighth Utility” of the world. This was back in 1996-97, way before GPS was in everyone’s car and cell phone (in fact, way before cell phones as we know them today). Charlie Trimble was indeed a true visionary.

As a public company, Trimble’s rapid, annual sales growth in those days of roughly 20 percent a year spoke for itself. I also provided insights into the company’s pioneering developments in differential GPS and dual frequency RTK, both also very successful business-wise. I had a major hand in dual frequency RTK’s commercial success from a product marketing standpoint and was able to detail its launch.

Frankly, promoting Trimble as a potential strategic partner was easy.

Over time, based on our many in-depth conversations, Kacyra eventually broached the magic topic, “Would I consider joining Cyra?”

By the time Kacyra asked me about possibly joining Cyra, I had become personally enthusiastic about the technology and the company. I was flattered and excited, but also nervous about the risk of joining a start-up with technology that was still being beta tested and an uncertain future.

There was a lot to weigh.

My situation at Trimble was good. Trimble and GPS, in general, were in high-growth mode with a bright future. I liked the company and I had done well career-wise during my seven-plus years there. I had a good, senior-level position, I liked my colleagues, and I felt that I was fairly compensated.

On the personal side, my wife and I had recently bought a new home (and mortgage), plus we had two college-bound teenagers. So, at that time, taking a financial and career risk of joining a start-up was something not to be lightly considered. Moreover, it was unclear to me just how successful this new technology would be, as there was no comparable precedent to judge it against.

Finally, I knew that I would need my wife and family to buy-in, not just from a financial risk-reward standpoint, but also from a time commitment standpoint. Joining a start-up was going to mean lots of long hours.

On the rewards side of the risk-reward analysis, there was the obvious financial lure of a potentially successful start-up going public at some point. Remember, I lived and worked in Silicon Valley. Stories of successful start-ups and fortunes made were regular fodder in the local newspaper. There was the additional lure of being in the starting gate of something special and being able to make significant contributions to its future. Plus, I felt that my reputation within Trimble could still benefit me should the start-up fail, and I were to try to rejoin Trimble.

What was I to do?

A major breakthrough for Cyra was securing Chevron as the first beta user. Chevron offered to beta test and make a $500,000 purchase commitment, pending a successful demo of the system at their Richmond, California, refinery. Chevron’s vice chairman, James Sulli-van, showed up unexpectedly for the demo via limousine. The pressure was on! 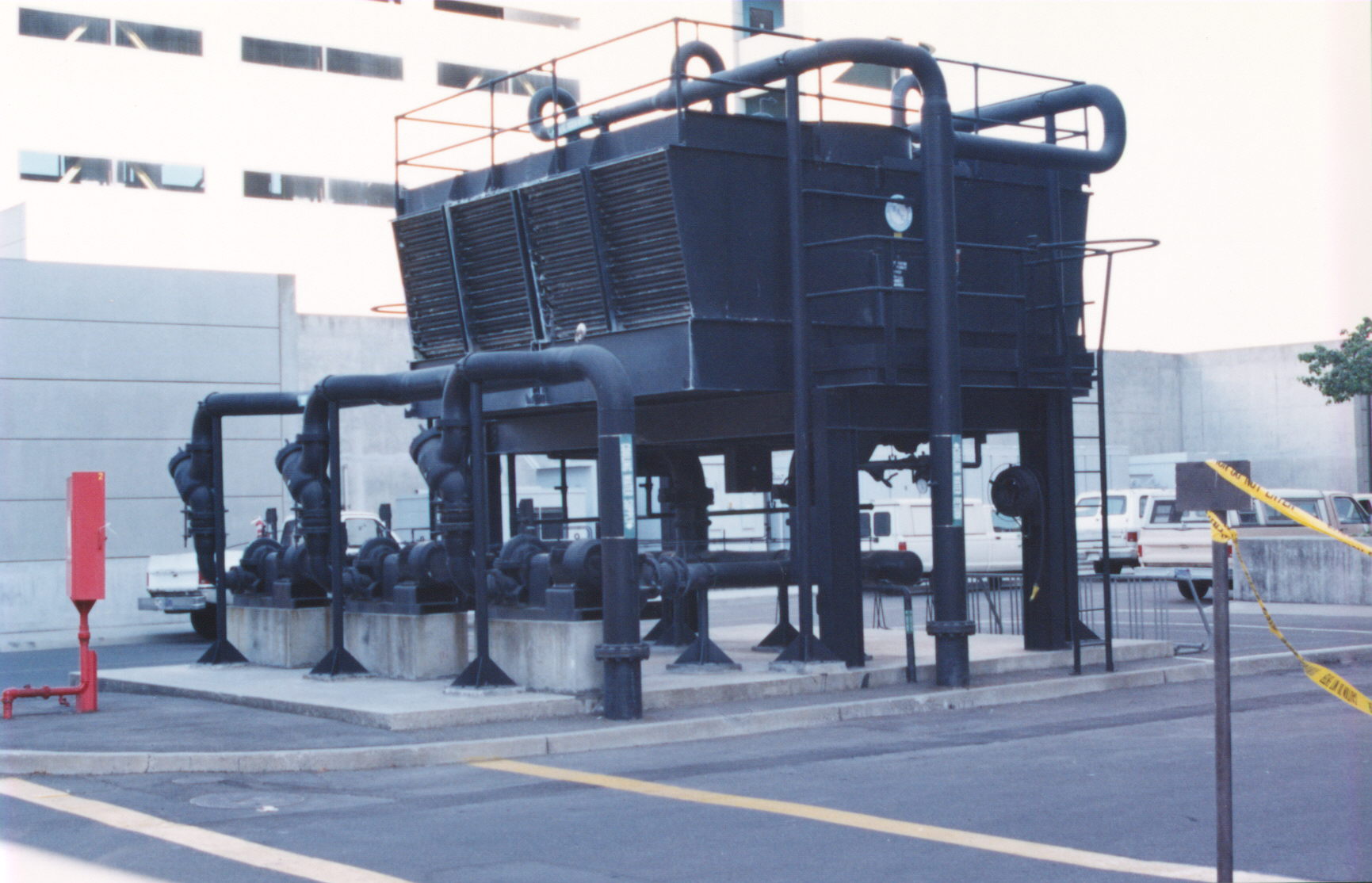 Equipment and structure that were scanned and modeled for pivotal Chevron demo. 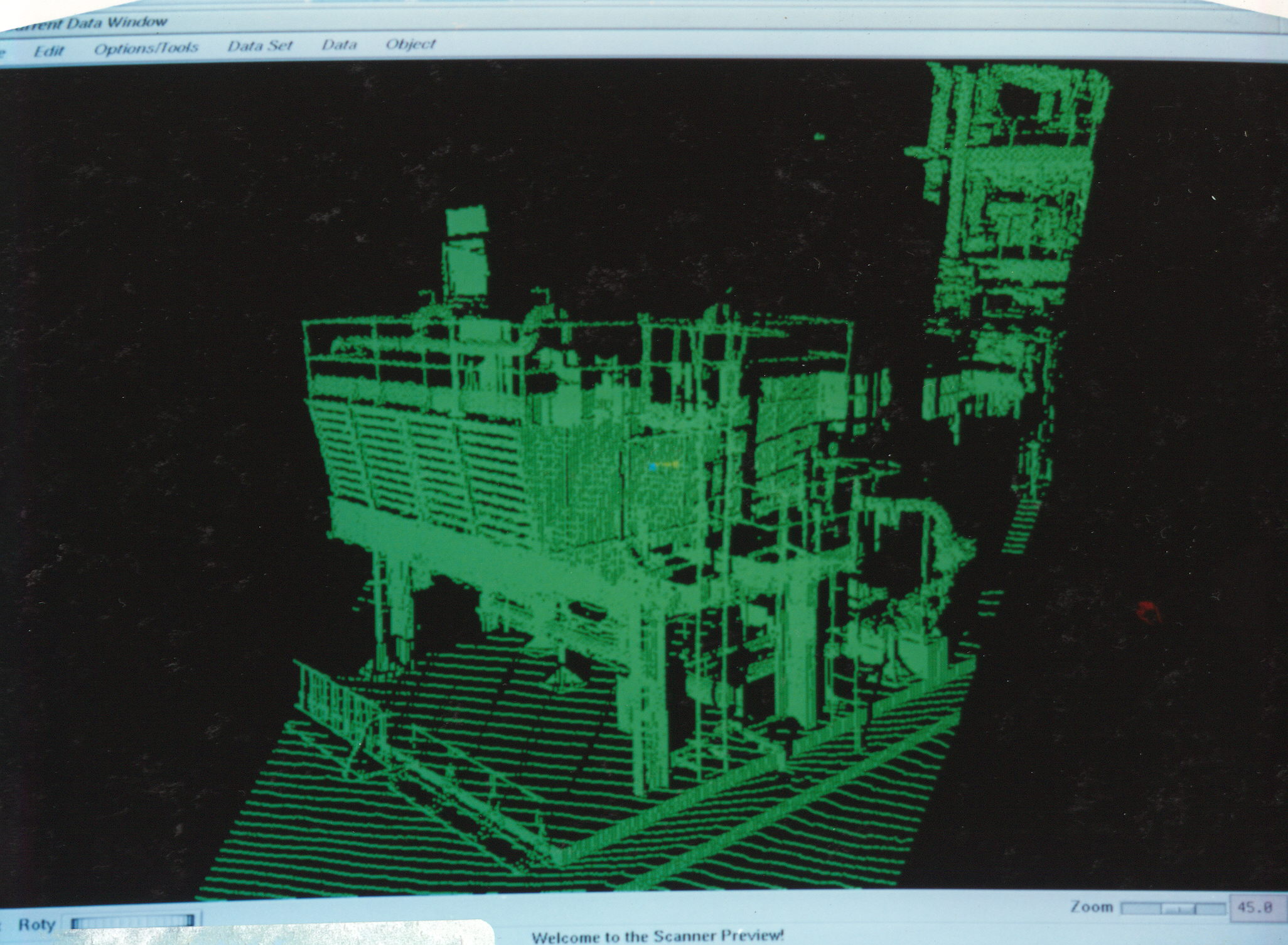 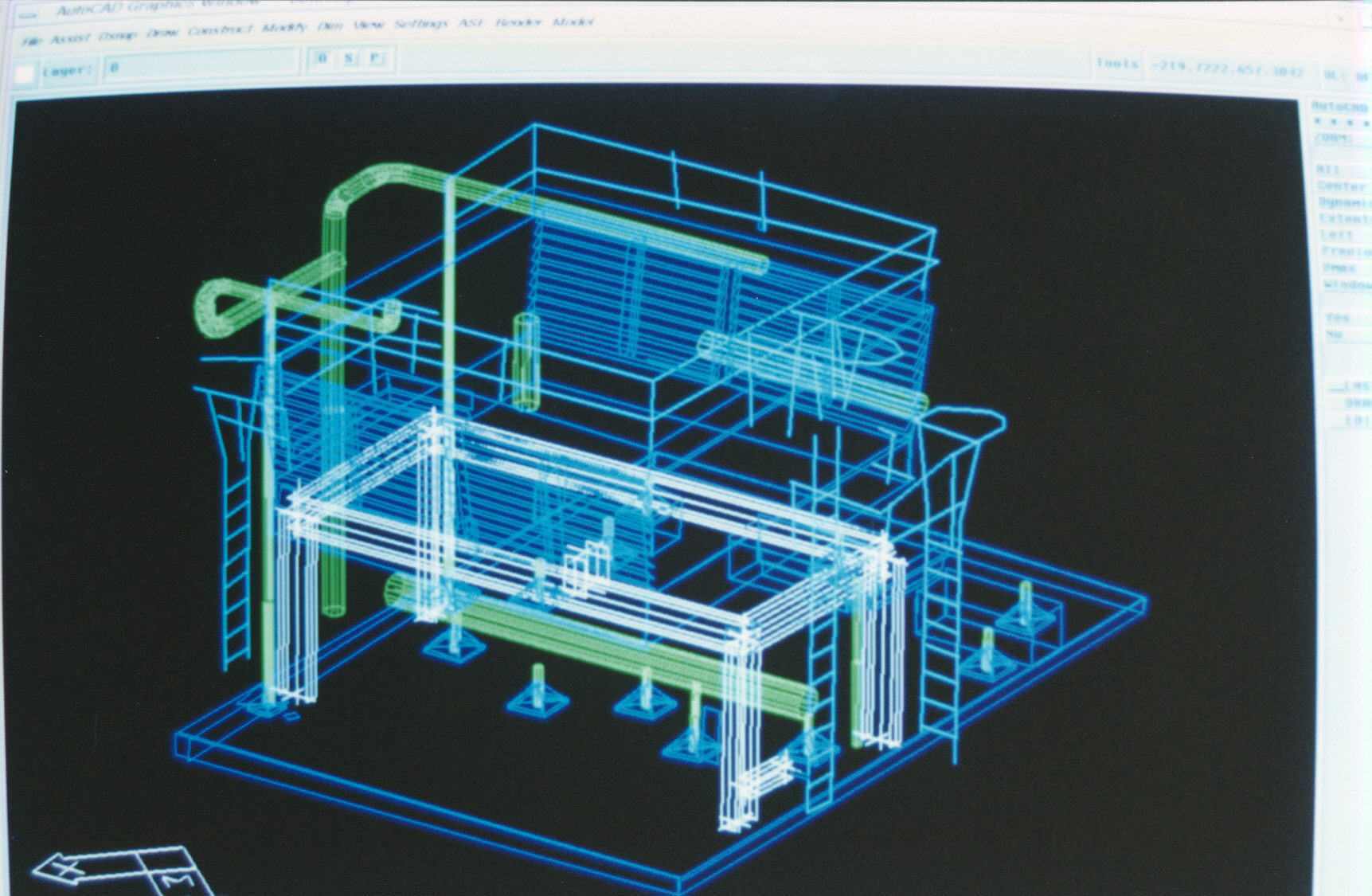 AutoCAD representation of equipment and structure created from scans. Scans were modeled in Cyra’s point cloud software and the model was exported to AutoCAD.

The demo went well. Chevron formalized their beta and purchase agreement and Cyra agreed to provide an alpha prototype in three months. That prototype was a re-packaging of eve-rything in the demo van so it could be shipped and be “portable” on site. Chevron’s first project test location was in the heat and humidity of Venezuela. Cyra shipped a system there along with Cyra engineer, Kevin Heppell, and it worked. Once Chevron was onboard, Flour Daniel immediately agreed to be a second beta user and to a purchase commitment of their own.