When I first came across Cyra Technologies Inc., a start-up that was developing 3D laser scanning, I was working at Trimble Navigation in Sunnyvale, California, in the heart of the San Francisco Bay area’s “Silicon Valley.”

I consider myself lucky.

I had the good fortune to be deeply involved in the very beginning of 3D laser scanning technology with a start-up company that was pioneering it. I look around and see where that technology is today–a multi-billion dollar per year industry–and I consider all of the valuable benefits that it has delivered to so many organizations and so many individuals around the globe…and the trajectory that it’s still on…well, it’s been an amazing ride. 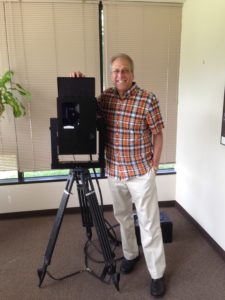 Over the years, as I’ve talked with others about my personal story–of how I got involved in 3D scanning and what happened in those early days, their reaction has often been, “Wow, that’s very cool. You should write it down, share it with others.”

Now, with the further encouragement of my esteemed xyHt editor and writing colleague, Gavin Schrock, that’s what I’m going to try to do here via my “GeoDude” column.

There’s a lot to the story, so it will take more than one article to tell it. But, I’ve got to start somewhere, and this it. I hope you find it interesting, informative and maybe even inspiring and entertaining.

When I first came across Cyra Technologies Inc., a start-up that was developing 3D laser scanning, I was working at Trimble Navigation in Sunnyvale, California, in the heart of the San Francisco Bay area’s “Silicon Valley.” It was 1996. My role at the time was director of product management/product marketing for Trimble’s survey grade GPS receivers – “yellow boxes” as Trimble’s customers often called them. In 1996 Trimble was still a “GPS-only” company (i.e., it was before Trimble merged with Spectra to become a full-line supplier of survey instruments). Charlie Trimble was still head of the company at that time.

Working at Trimble when I did–through the 1990s–was a very interesting time. GPS was really starting to take off globally and Trimble’s GPS survey receiver business was king of the hill in the survey market. We had introduced dual-frequency RTK a couple of years earlier at a FIG conference in Melbourne, Australia, and it had taken the survey market by storm. Things were good. Really good.

That 1994 FIG conference, by the way–and whom I met there–would later play a huge role in the way things eventually turned out for 3D laser scanning technology and for me personally. You never know when someone you meet one day, in a seemingly innocuous manner, might turn out to play a huge role in your life and career down the road. Good contacts are invaluable.

But back to my time at Trimble…

Along comes a fellow by the name of Ben Kacyra, CEO and co-founder of Cyra Technologies. For me, that’s when it – 3D laser scanning – all started. Ben had approached Trimble looking for a possible “strategic partner” to help commercialize Cyra’s fledgling 3D laser scanning technology. Ben’s company was still very small, his 3D laser scanning technology was still in development, and he wanted to eventually partner with a global organization that was roughly in the same market space–geometry capture of big stuff. In a strategic partner, Ben was looking for a respected company that could possibly take on volume manufacturing of 3D laser scanners and global sales, distribution, and support, among other things.

I learned from Ben that while there were other very respectable players in the survey instrumentation market, including Leica Geosystems, Topcon, and Sokkia, several surveyors and others had encouraged him to try to focus on Trimble as a first choice.

Their reasoning was that Trimble, starting from scratch, had done a great job taking GPS technology into the survey market. In the big picture, GPS was totally unlike any other technology that had previously been used for surveying. It had no optics, no angle encoders, no electronic distance measurement elements. It was essentially a radio receiving signals from satellites and Trimble had very successfully engineered it into survey solutions, complete with office software and accessories, with a full organization to market it and support it globally.

Ben felt that an entrepreneurial Silicon Valley company like Trimble, that had so successfully taken such a non-traditional technology like GPS into the survey market, would be a natural candidate to explore as a potential strategic partner for his very non-traditional 3D laser scanning technology. Another plus for Trimble was simply location. Cyra at the time was headquartered in Orinda, California, a suburban community also in the San Francisco Bay Area. Ben lived in Orinda and his company had rented space in a small, commercial office building not far from his home. Trimble was just a drive away.

From Trimble’s standpoint–or that of any manufacturer/vendor–the task in fielding such technology partnership inquiries becomes one of evaluating its business potential and fit, what would be involved in taking it to market, etc.

Ben’s initial inquiry into Trimble found its way to business development staff in the survey and mapping division I was in. At the time the division, the company’s largest, was run by executive vice president Jim Sorden, who reported to Charlie Trimble.

The initial take inside was that this fellow, Ben, was very enthusiastic about his new technology, but wanted a non-disclosure agreement (NDA) before he would tell us (or anyone) much about it. From a business standpoint, my sense was that Ben was unusually protective, requiring an NDA so early in the discussion. But Ben had envisioned great potential for his new technology, and he stood firmly behind his grand vision and his protective posture.

At that time, Trimble was looking into the future, as all companies do, and, in its case, had come to believe that adding optics/EDM based survey instrumentation to their product portfolio could well be beneficial in the long run for the company’s overall penetration and positioning within the survey market. Of course, that eventually materialized.

The demo that changed everything

At one point, our business development guy who had fielded Ben Kacyra’s initial inquiry thought enough of it to pass it on to me for my direct involvement. I don’t recall the exact sequence, but at one point I drove to Cyra’s office in Orinda for a demo of the 3D laser scanner his company was developing.

At Cyra’s office, on one end of a 20-foot long hallway, hung a dartboard. It was a traditional dartboard with metal wire frames on the surface, sectioning off the numbered, 2x, 3x, and bull’s-eye areas. At the other end of the hallway was a big, black box 3D laser scanner, still in the development stage, oriented toward the dartboard. The scanner was controlled by a laptop. The laptop not only triggered the scanner to scan, but it was also able to display, as green dots on a black background, points being captured in real-time as the scanner was working.

The scanner emitted a green laser. As laser pulses hit a surface, you could easily see green dots on the surface. The scanner started scanning a sequence of vertical columns, steadily moving from one column to the next column, from left to right across the wall and dartboard.

Then it happened. It’s happened to all of us at one point. The moment that you first saw laser scans (point clouds) being manipulated on a computer display in 3D–in this case in real-time as the scanner was scanning.

The first demo that I saw of 3D laser scanning was a live 3D laser scan of a wall and dart board in Cyra’s office in Orinda, California. I was blown away by the demo–had never seen anything like it before. My gut said this was something worth diving into a lot deeper.

I saw the straight-on geometry of the wall and dartboard gradually emerge on the laptop display. The guy working the laptop then used his mouse to move the view of the emerging point cloud in 3D and zoom in on the displayed scan points.

I was not only able to see the dartboard surface relative to the wall surface, but I was even able to see the “elevated” wire frame sitting atop the dart board surface from a 3D perspective. On his laptop display, he flew around the emerging image in 3D and then took distance measurements between some of the displayed points. To top things off, he then instantly converted all of the scan’s green points into “intensity map colors” – I could clearly read the dart board’s numbers, letters, and geometric sections! The whole demo took a couple of minutes. It was jaw dropping. 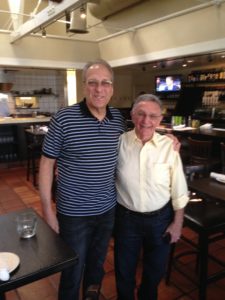 The author with Ben Kacyra, who had the original idea for 3D laser scanning and co-founded a start-up, Cyra Technologies Inc., to develop and commercialize it.

Okay, Ben. Now I’m really interested. I’d never seen anything like it before–quickly and remotely capturing detailed surface geometry, instantly displaying it (in 3D no less!), and immediately measuring from it. It was amazing.

Beyond my gut amazement, I also thought that from a “fit” standpoint from Trimble’s long-term perspective, this was intriguing, as the technology represented a path into EDM type of survey geometry capture, but with a very different technological approach. Ladies and gentlemen, it was time to kick my evaluation of this novel, sexy, 3D geometry capture technology into another gear.

Next article: Diving deep into evaluating this new technology and the start-up company.