In early July 2014, the residents at the end of Eastside Drive, a tranquil community of lakeside homeowners in Cobb County, Georgia, were perplexed to see workers installing a fence, ostensibly down the middle of their paved road.

When the fence was completed, and where homeowners once enjoyed the ability to back up their vehicles onto Eastside Drive and park in a small cul-de-sac area, they were now restricted in their vehicle movement. To overcome this inconvenience, some homeowners had to install small gravel parking areas in front of their homes, while others had to turn around in adjoining driveways, and one particular homeowner had her SUV entirely trapped by the fence.

The Lake Bishop subdivision plat of April 1930 shows Eastside Drive having a 15-foot right of way. At the request of homeowners, the Cobb County Department of Transportation paved Eastside Drive in 1996. At the very end of Eastside Drive, the county had placed asphalt over an apparent cul-de-sac area, as defined by the remnants of a gravel area.

This area in question was used by the public for a long period of time (30 years or more), and this area contains utilities, such as a fire hydrant and power pole, as well as communication lines.   The predecessor in title had not contested this area, and, in fact, executed an easement in favor of the local electric membership. Some homeowners regularly parked their vehicles in this cul-de-sac, and an open and notorious use of this area became the order of the day.

A new owner took possession of the property and hired a surveyor to locate the boundary line on Eastside Drive for the installation of a fence. When the fence went up, it effectively blocked access to the cul-de-sac area, as well as access to a fire hydrant and other public utilities.

The owner of the property also installed a gate to allow limited access to the utility area. The fence left approximately 15 feet of the asphalt driveway for homeowners to back up and park their vehicles, the 15-foot right of way as shown on the 1930 plat. The boundary line defining the fence location is not in dispute. 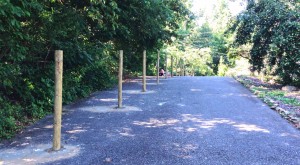 In early July 2014, the residents at the end of Eastside Drive, a tranquil community of lakeside homeowners in Cobb County, Georgia, were perplexed to see workers installing a fence, ostensibly down the middle of their paved road.

The questions that a professional surveyor must ask at this point, acknowledging the utility easement, is, “Are there any prescriptive rights that will affect this survey?”   Since a fire hydrant is present on the east side of the cul-de-sac, the fire department needs access to this area, as well as the water system and the local electric membership.

To answer that question, one must look at Georgia law, and it is necessary for surveyors to be aware of the creation of roads, easements, and prescriptive rights in any state.

In the state of Georgia, roads are created by deed, easement, dedication, prescription, statute, or condemnation. The Official Code of Georgia Annotated, O.C.G.A. 32-3-3(c), states the following: “Notwithstanding Code Section 44-5-163, any state agency, county, or municipality is authorized to acquire by prescription and to incorporate into its system of public roads any road on private land which has come to be a public road by the exercise of unlimited public use for the preceding seven years or more.”

It is important to note that once the requirements of open and notorious use apply, there is no limitation on the size of the property that can be acquired by prescription.

The Official Code of Georgia Annotated, O.C.G.A. 44-9-54, recognizes the right to acquire an interest in private roads by adverse or prescriptive use. “Whenever a private way has been in constant and uninterrupted use for seven or more years and no legal steps have been taken to abolish it, it shall not be lawful for anyone to interfere with that private way. “ The Georgia courts have expanded the statutory requirements, through case law, and the requirements are the following:

From 1799 until 1973, Georgia had a statutory procedure for dealing with the right-of-way of county roads. Public roads would be cleared to a width of thirty feet. According to the courts, this raised a rebuttable presumption that all roads maintained by the county are thirty feet wide. This act was repealed in 1973. Therefore, roads prior to 1973 are thirty feet wide (unless otherwise shown), and roads maintained after 1973 must be determined by what is actually used and maintained (Cagle 1991).

In Clack v. Henry County, the county’s right to a roadway depends on the historical use of the roadway as a public road, not on any express grant of the property to the county or on any express dedication of the property for use as a roadway. In cases of implied dedication, there is no dedication implied beyond the use. When dedication results from mere use and acquiescence, it is not to be inferred that the donor parted with more than the use necessitates.

One of the primary concerns for any government agency is to protect the health, welfare, and safety of the public. To seek a remedy in law for the removal of the fence, Cobb County and Cobb Electric Membership Corporation filed a Petition for Temporary Restraining order and Preliminary and Permanent Injunctive Relief and Complaint for Damages against the parties in question.

When the case went to court, the plaintiffs and defendants entered into negotiations, and after several hours in court, agreed to a settlement. Cobb County will remove the fence at its expense, and the court granted prescriptive easements for the right-of-way of Eastside Drive in favor of Cobb County and utility easements in favor of Cobb EMC, as depicted on a plat of survey by William H. Helbig, RLS (me). 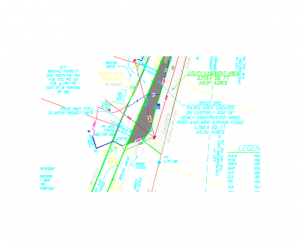 Because of this legal action, the public utility company, public safety vehicles, and emergency vehicles, now have access to this prescriptive easement, as well as the safe ingress and egress of area residents. The owner of the property will assert their property rights, and Cobb County will place “No Parking” signs along the boundary on Eastside Drive.

What Every Survey Should Be Asking about Prescriptive Rights

In legal cases like this one, one can argue that the surveyor was hired to locate the boundary line for an installation of a fence. The surveyor performed his or her service, sent out a bill, and moved on to the next job. However, did the surveyor perform his or her due diligence by delineating the public utilities on the plat of survey, delineating the asphalt area in question, and looking into this a little bit more, especially the easement granted to the electric membership?

Furthermore, being aware of the Georgia law concerning prescriptive rights, could the surveyor have, at a minimum, prevented his client from going to court by at least informing the client that a prescriptive right more than likely exists due to the location of the public utilities, and the open and notorious use of the cul-de-sac area for public parking for a period exceeding 30 years? A phone call to the right-of-way department at the county most likely would have resulted in an uneventful resolution.

Every surveyor should be asking these questions, and this line of questioning will result in an opinion rendered by the surveyor as to the location of all public and private features of the survey, exactly what the surveyor’s obligation is to the client: location.

Typically, these matters are left for the courts to decide, and in this case, legal action favored the county and the property owner spent a sum of money by installing the fence, paying for a survey, and paying for attorney fees. In similar circumstances, the best call that a surveyor can make in this case is not to end up in court.