Layout for a high-rise curtain wall in Hawaii is dramatically streamlined with a 3D scanner paired with BIM software.

It’s difficult for a structure to stand out on the Honolulu waterfront—the area is one of the busiest, yet most beautiful, on the island of Oahu. Home to Waikiki Beach, exclusive marinas, a breathtaking view of Diamond Head, and impressive developments on both the retail and residential fronts: it has it all.

So when a developer announces plans for yet another high-rise in this area, it generally doesn’t raise many eyebrows. When Victoria Ward Ltd. and Howard Hughes Company released renderings of Waiea Tower, however, the breathtaking design—particularly its simulated wave, glass curtain wall—did that and more. 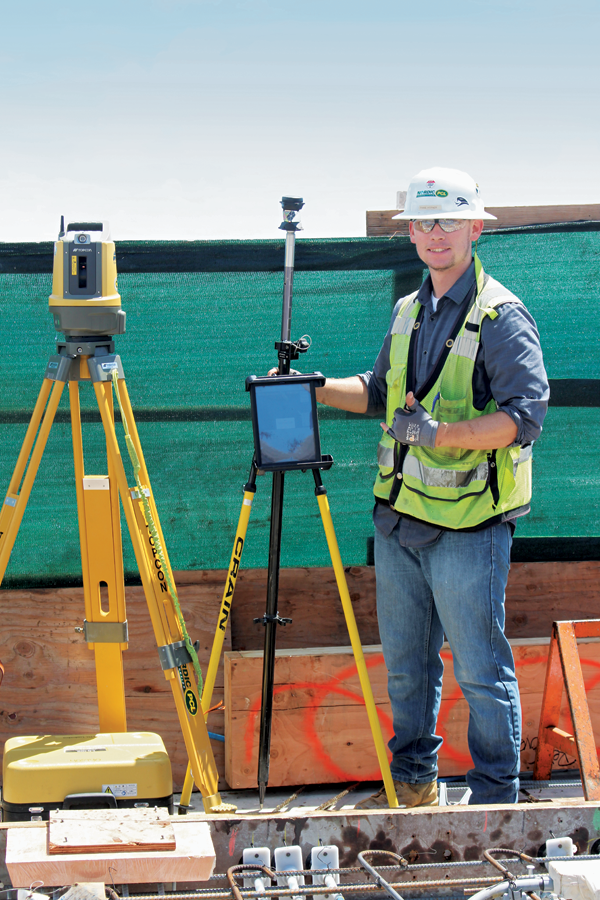 Bringing that impressive design to life was not easy, as general contractor Nordic PCL found out. To resolve serious curtain wall installation challenges, the company turned to new layout technology, specifically a 3D positioning system and BIM software. Once they did, production soared, and that facet of the job literally became “a day at the beach.”

Even without its signature wavy curtain wall, Waiea Tower stands out among the scores of high-rise condos dotting downtown Honolulu. In an economic climate in which rents, leases, and outright purchase prices are not for the faint of heart, the 38-story structure will be home to 171 ultra-luxury condominiums (asking prices for penthouse units are described by the developers as “record breaking”). But the wall, described by its architects as one of a kind, is truly what sets it apart, according to Thane Werner, Nordic PCL’s field engineer.

“This is an all-concrete structure with a traditional curtain wall exterior on three of the exterior sides,” he said. “On the remaining side, the east-facing wall is a unique, simulated wave, glass curtain wall consisting of more than 600 panes, each different from the other, which runs the full length from top to bottom. This was one of the most unusual designs we’d ever encountered, and it presented a situation that we’d never dealt with before.”

Curtain walls are traditionally anchored to a building structure by welding steel angles to weld plates embedded in concrete. To secure the curtain wall to the structure at Waiea, each panel has to tie in to any of a variety of embeds attached to each floor’s post-tensioned slabs. It was in this area that securing the wave wall proved most problematic, according to Werner.

“On any given floor there can be as many as 320 embeds, and we needed to ensure that each embed was in the precise position to mate with what the glass supplier had provided,” he said. “If the embed is found to be out of position, we would be forced to do a re-work to make that structural connection happen. That can be both costly and time-consuming.

“At the outset of the wall installation, we were performing a manual layout for each of the embeds, which was proving extremely cumbersome.”

That layout, said Werner, included his crew and him pulling tape from two different dimensions in order to set up offsets. “I was out there all day every day pulling tape from gridlines to make sure each of those locations was correct,” he said. “At the outset of the project, we were only doing half of the structure at a time—about 170 embeds on each floor—and that was taking us about two days. Looking at the task ahead, I felt there had to be a better way to do this.” 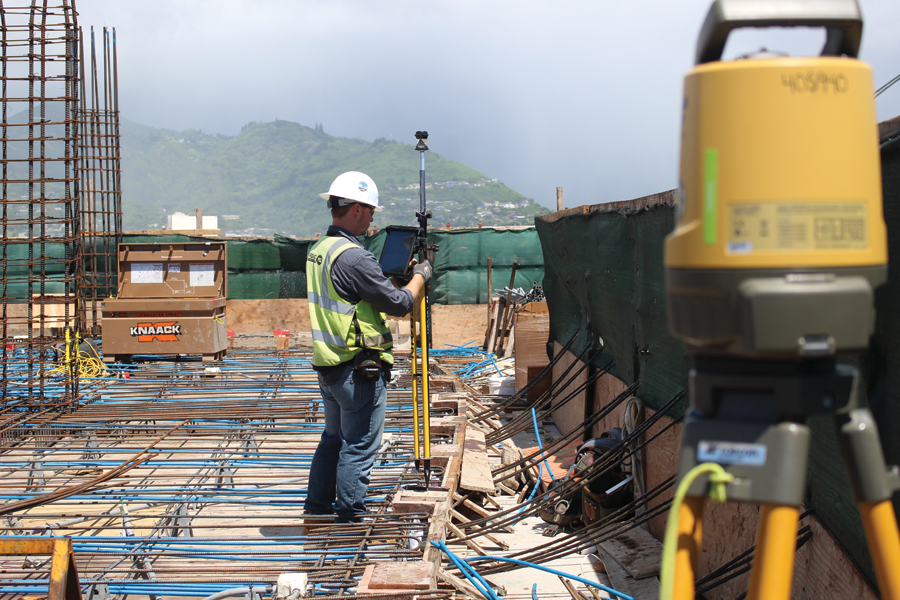 About that time, Werner had seen a YouTube video of PCL using a Topcon LN-100 Layout Navigator and immediately felt that it could be the way to save a good deal of layout time.

“If what I was seeing was correct, instead of having to pull tape, we could simply set up this 3D positioning instrument and verify that all these locations were correct,” he said. “So I spoke to one of my managers and told him I felt we should look into this technology. My rationale was simple: by using it, we would be able to quickly and accurately ensure that every embed is in the correct location, eliminating the need to chip away at the slab and reposition wrongly-placed embeds—and the costs associated with doing so.”

Werner’s pitch was accepted, and they were soon talking to Asa Kaneko from RDO Integrated Controls, the Topcon dealer on Hawaii’s Big Island, who set them up with an LN-100 Layout Navigator. According to Werner, despite having no prior experience with survey equipment, he found the unit to be almost self-operating.

“It was extremely simple to use,” he said. “It is a self-leveling instrument and operated in conjunction with an iPad-driven Autodesk BIM 360 Layout app which connects to the LN-100 via WiFi.

“Once it was up and running, I was able to take a re-section and, running off the 3D model on the iPad, I was able to see, in real time, where my prism rod was in relation to the LN-100. From there, I simply verified my points, and we were in business.”

The level of productivity using the Topcon LN-100 was nothing short of amazing, according to Werner. To reiterate: in the past Nordic PCL was taking roughly a day and a half to two days to obtain 170 points.

“Using the LN-100, I am able to do that same number of embeds—with accuracies consistently well within our parameters—in anywhere between one and two hours,” said Werner. “That’s an impressive turnaround that’s made even better in knowing we’ve all but eliminated any rework costs.”

He added that the unit is currently only being used on the Waiea project, but he can see it being used to verify pipe, floor layouts, wall layouts, any kind of MEP (mechanical, electrical, plumbing) layout, and so on.

“We already have other field engineers who have expressed interest in using it, so we’re pretty certain it will have a place in our everyday use,” he said. “But the bottom line is: it dramatically turned the layout facet of this project around.”

“BIM: Scaling the Challenges of a Curtain Wall” Comment