The release is timely. For forward-thinking firms trying to meet increased demand, two key challenges are staffing up and gearing up. Many firms that have not added crews or upgraded kit for more than a decade are looking to do both in a hurry.

xyHt attended several surveying and AEC industry conferences in the first half of 2016, and we’ve discovered that 2016 is shaping up to be boom time. The boom is not in every part of the country or for every AEC segment, but this is the most pronounced uptick we’ve seen in decades.

There’s no time for putting together amalgams of gear (no science projects, please). Instead, we hear firms wanting to outfit crews with complete kit, everything they need to perform the wide range of surveying and construction support services currently in high demand.

While we don’t endorse specific gear, the significance of this recent Topcon integrated multi-product launch lies partly in the entire suite being released at once and partly in timing: providing a whole solution to meet the demands of the uptick in markets for surveying services. 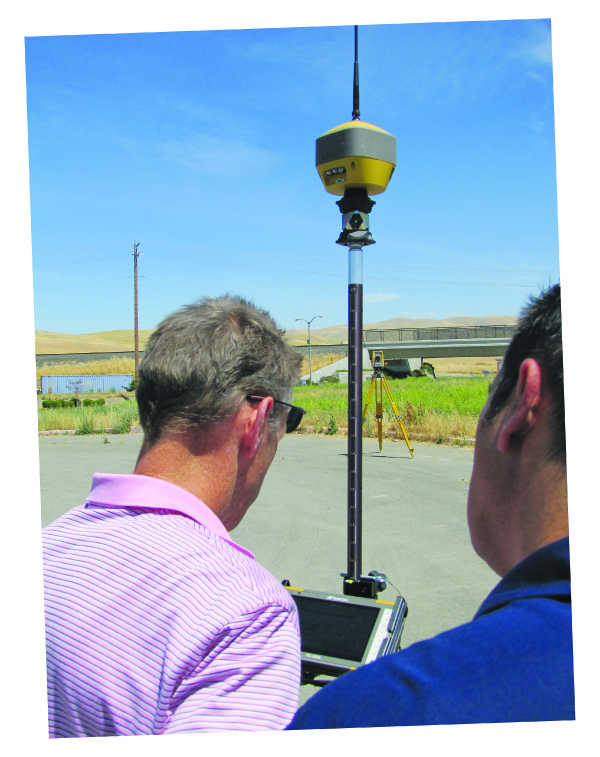 All four elements of the suite in the mix during our test drive. To turn the GT total station rapidly and precisely, voltages in the ultrasonic range are sent in a wave across the stator of the patented frictionless drive.

Dubbed the Surveying Elite Suite (try to cut the marketing folks some slack–the product is cooler than the name), it has the four essential components of a complete surveying kit: robotic total station, GNSS rover, field controller, and upgraded field (and office) software.

These are the essentials for any crew, and in all but the rarest circumstances could a crew meet all of its needs without all four. (Yes, people have told me that, for instance, I could do my work without a total station, but coincidentally they had no total stations to offer.)

We were given a preview and test drive before the release–I had time to get a preview of the new HiPer HR in the previous issue before it went to print (see Hard Ball in the July 2016 issue), and now I’m able to expand on all four elements of the full suite.

The new GT series robotic total station is faster and lighter than previous models: lighter and smaller by about a third. When you carry it, it feels like a small mining total station or an old mountain theodolite; even the case is much smaller than the total station behemoth cases we have come to curse. I was able to pick it up with one finger (though of course would never recommend that)

The GT operates as smoothly as any robotic total station I’ve tried and integrates with the rover as a good total station should. It can be operated by Magnet Field onboard via the slightly bigger, color touch-screen faceplate and/or with Magnet Field on the field controller. I like working robotically from a field controller on the pole, but with the smooth motion, new display, and keyboard, I can see the appeal of working from the faceplate for reflectorless collection.

I tried getting ahead of the motion with the pole when operating robotically, but it kept on tracking (I don’t run from point to point anymore, but I had a good jog on). With the rover on the pole, it can also track via location for sites with a lot of obstructions. 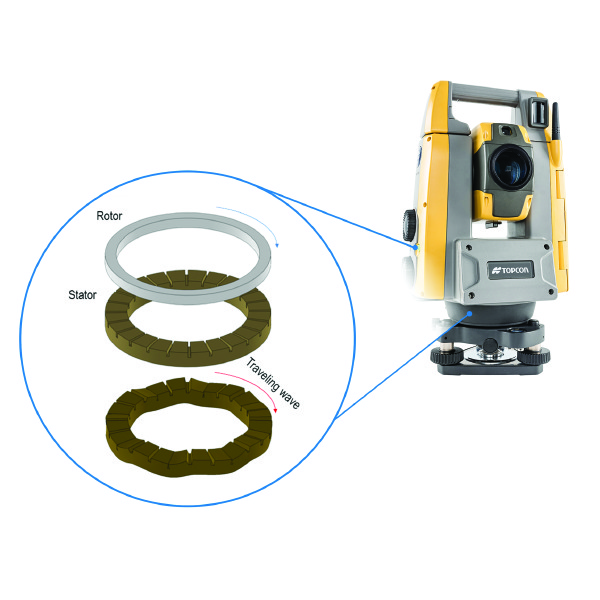 To turn th eGT total station rapidly and precisely, voltages in the ultrasonic range are sent in a wave across the stator of the patented frictionless drive.

Topcon has been developing workflows for site, project, hardware, and software management, and adding high-speed communications to the various components. In addition to traditional UHF and spread-spectrum radio options, long-range and “smart” Bluetooth, wireless, and integrated modems are being added. The GT has an integrated cellular modem: pop in a SIM card and roll. It has the TSshield technology installed for tracking for anti-theft and equipment management.

The motion of total stations needs to be precise, rapid, and reliable, but legacy motor drives are subject to wear and tear. The desire for faster and smoother motion has seen developments, such as magnetic and piezoelectric drives, but this has not completely eliminated friction. Topcon’s entry into this ongoing quest is their patented ultrasonic drive.

Voltage (in the ultrasonic range) creates a travelling wave across the stator, and the stator is in constant contact with the rotor. There is no standard magnet and coil; the rotor does not need a gear to perfect the rotation torque as in a standard motor-driven instrument. It is also smaller and lighter than a conventional motor. The motion is silent, accommodates fine and rapid motion, and eliminates the friction of many of the other solutions. There is a high holding power even in a non-energized state, and there is no friction when manually turned. The small tick-tick sound during precise adjustment is the precise voltage control kicking in; it gives the unit a signature sound (that beats the old-school grind and whir).

Fast and precise: yes. But does the frictionless operation make that much of a difference? They do offer a full five-year motor warranty. Topcon must be confident in this solution.

As mentioned above, details about the HiPer HR rover are in the July issue of xyHt, but here is a summary. The HR is not only Topcon’s newest rover, it is also a new GNSS rover platform moving forward for Topcon and in some ways for the industry.

The compact ball shape is much the same weight as previous rovers, but they packed a lot in there. At its heart is a new board for Topcon with 452 universal tracking channels–it is not sheer numbers of channels that count, but how you fully optimize each channel without needing to add a dedicated channel for each satellite signal. This patented technology allows them to accommodate all of the current constellations and prepare for constellation augmentations and modernization.

A weak point in some base rover scenarios can be that the base may be of lesser quality. The HR has the same core components as their flagship reference station receiver, the NET-G5. Also, the HR has a doubled-stacked FENCE antenna to accommodate all of those satellites and signals, and it is a full-wave antenna (many rovers have half-wave antennas). My rudimentary multipath tests during the test drive went very well. 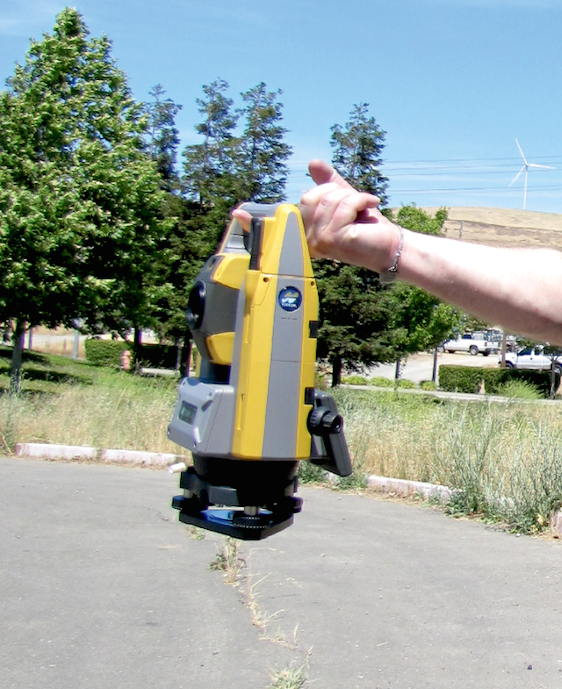 While the new GT robotic total station packs a lot more than previous models, it’s smaller and lighter than most top-end totals stations by about a third. And yes, I was able to pick it up with one finger but I don’t recommend doing it.

Again, as one goal is to be able to integrate every element of their gear into site-, project-, hardware-, and software-management workflows, the HR has long-range smart (LONGLink) Bluetooth and optional UHF or spread-spectrum radio, WiFi, and an internal cell modem. With Magnet Relay you can communicate with up to ten instruments over I.P.

The other new feature is a built-in Topcon-engineered hybrid IMU, a 9-axis MEMS plus 3-axis compass that enables the e-bubble and tilt-compensation and helps identify and reject outliers when working in light canopy. Magnet Field walks you through the simple calibration routine, which takes only 60-90 seconds (this involves rolling the “ball” around in your hands like you are molding a snowball).

Tilt compensation performed as well as any I’ve tried and particularly well at the standard 10Hz rover update/output rate (though it can be operated at up to 20Hz.

The latest in the FC series got a larger display but also upgrades in nearly every aspect. The FC5000 that’s been out for a few months is essentially a ruggedized (IP68: more dust- and water-resistant than most total stations or rovers), 7″ Windows 10 tablet. For those who are used to the ubiquitous hand-held field controllers standard for over a decade, the large size can seem intimidating at first, but the more a user moves towards integrated surveying and working in 3D, the extra real-estate becomes addictive.

It did not feel much heavier than previous models and balanced much the same on the pole. My only suggestion would be for some extra strap options for hand-held operation. Imagine a high-end tablet that you could watch high-res streaming flicks on but that can withstand a four-foot drop.

All of the standard tablet features are there: WiFi, Bluetooth (long link smart Bluetooth), and an optional internal 4G LTE cellular modem. Again, with Magnet Relay you can run up to ten instruments via I.P. or three via Bluetooth. It has a USB connection and a docking port, built-in 72-channel GPS, an 8MP rear-facing and 2MP front-facing camera (Selfies? Just kidding. I have found the front-facing camera on a smart phone just the thing for reaching under or around things in the field, and having it integrated into the FC allows you to attach the photos to field-collection files).

You can use other field collectors in the FC series with the GT and HiPer HR and Magnet Field 4, but the FC5000 is recommended with this suite to accommodate a broad range of surveying activities and to take full advantage of Magnet Field 4 and online services such as Magnet Enterprise and Sitelink 3D (look these up–they were not part of our test drive).

When Magnet Field was first released several years ago, it was a much-appreciated replacement for TopSURV (yay!). While capable and powerful, at times it could be clunky and kludge. Now Magnet has fully addressed any legacy issues and has continued to grow into a top-shelf field, office, and enterprise software suite. The release of Magnet Field 4 was timed with this full suite of hardware and software.

While some of the new features are incremental, there have been significant developments in integration with MicroStation and Autodesk software. This rounds out the whole suite. A crew can be outfitted with a completely integrated kit and can connect with other crews in the field and the office, and the gear can be managed and upgraded through cloud-based services. Sweet.