Featured image: The Raecon team flies a UAV across the Strait of Georgia, performing an aerial power line inspection.

AS DAWN BROKE off the Sunshine Coast of British Columbia, Canada, the Raecon Industries team set out by boat toward the day’s job site. They’d been hired to perform a challenging aerial inspection of an old power line that spanned from the mainland, 2.4 miles across the Strait of Georgia, to an uninhabited island.

Whales leapt from the waves nearby as the captain radioed to let fishing boats know the team was in the area. Timing their mission around the hourly ferry trips across the busy waterway, the team prepared the UAV, a Microdrones md4-1000, for takeoff on the deck of the boat.

Raecon Industries may be only two years old, but they’re a UAV-industry veteran. One of the first companies in B.C. to use drones for industrial inspection, the Raecon team brings much experience to the power, construction, and business industries.

“For this job, a large utility company commissioned us to inspect an extremely long power line for corrosion,” explained Ben Van Lare, Raecon’s operations manager. “Their goal was to determine whether the line needed to be replaced. We also inspected all the marker balls for hot spots. It was a big job that demanded we do about three days’ worth of work in just one.”

The tight time frame wasn’t the only obstacle the Raecon team faced on this job. There were harsh environmental conditions like wind, water, and reflected light. There was traffic from ferries, whale-watching tours, and fishing boats. There was the heavy payload the drone would carry: both a high-definition camera and a thermal sensor. 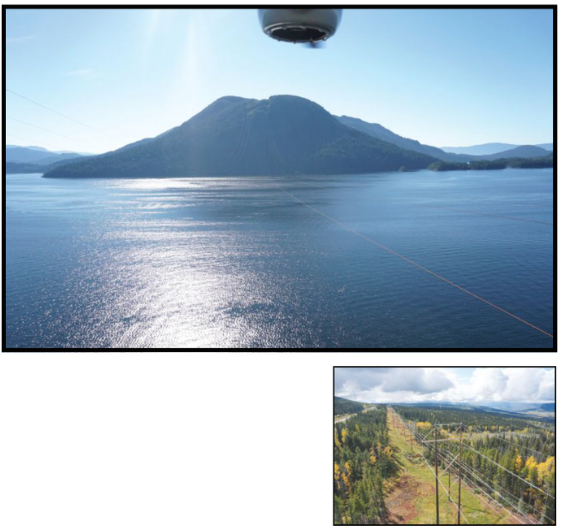 Top:
The power line to be inspected was so high, the Rae- con team couldn’t see it by boat.
Below right: Raecon inspects more than 150 structures high
in the windy mountains near Dawson Creek using a Microdrones UAV.

The Raecon team is no stranger to challenging inspection projects with tight timelines and rough weather conditions. On one mission in eastern B.C., the team managed to inspect a massive dewatered canal in less than four days. This task would have taken more than four weeks if engineers had roped down into the canal on foot.

Another recent mission took them to the mountains for five days, where they inspected more than 150 structures in the cold, wind, and snow.

“We were warned before the Sunshine Coast power line job that the wind could get up to 20-25 kilometers per hour. We took precautions, but we weren’t worried. On our previous mountain job, we had flown in very strong winds. So we were confident the Microdrones UAV could handle the job. Plus, we have a great deal of experience navigating windy conditions.”

Another challenge the team faced on the Sunshine Coast project: the power line to be inspected was high. Very high.

“The line was so high, we couldn’t see it from the boat,” said Van Lare. “It had to be that high, because large ferries travel below it. The lowest point was 750-feet high and the highest were 1700- 1800 feet.”

According to Canadian law, UAV pilots can fly to any height as long as they stay within a specified distance from the structure. The Raecon team flew the drone directly over the line as the inspector watched from the boat via video.

“I was really impressed with the video feedback, considering the distance we were from the unit,” said Van Lare. “We were directly overhead, 1500 feet up, and we had absolutely perfect video feedback.”

The height of the line was a major time-management challenge on this job. “We were often sending the drone up about 1500 feet. It would take three to five minutes just to get up there, then another two to position the UAV. I’m extra careful when bringing the drone down, so that took five to seven minutes,” said Van Lare.

“We had an unusually heavy payload and that cuts down on flight time, so we were thankful that we could get 25-27 minutes of flying time. That left us around 12 minutes to do inspection work each flight. With another drone we would probably have around four minutes to inspect. We could never have completed the work in one day.”

UAV choice is also important for avoiding legal issues. “If you’re flying over the ocean and your drone crashes and sinks, you’ll be liable in environmental lawsuits,” he warned. “We considered putting pool noodles on the drone. But we were confident in its reliability. So we just stayed right underneath so we could easily fetch it if something happened.”

Beyond choosing trustworthy, professional equipment, Van Lare said the expertise of the team impacts the quality of Raecon’s work.

On every inspection, Raecon sends a three-man team. One person manages the project and flies the drone; one ground observer monitors privacy, safety, and trafline to be fic issues; and one lineman performs the inspection via live video and completes the documentation. For this project, the outcome was that the line showed signs of corrosion Raecon and needed to be replaced. “It was the first time the client had collected this type of information via drone, so tures high in the windy mountains they also performed the innear Dawson spection with a helicopter to compare results,” said drones UAV. Van Lare. “The imagery collected via drone was far superior. We don’t always hear the outcomes of our clients’ missions, so it is gratifying to know our work is providing value and helping clients improve safety.”