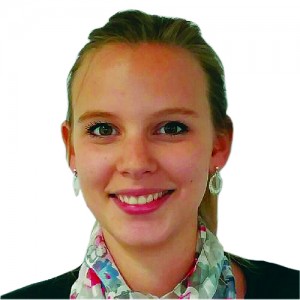 MANY OF THE SOLUTIONS employed in geomatics sciences are no longer limited to purely spatial measurements. Remote sensing, lidar, InSAR, and even GNSS can now yield far richer data on the physical properties of the objects and mediums that their signals contact and pass through. The related work of this young geomatics professional has gained international attention.

Laura Van de Vyvere received an MSc in geomatics and geometrology from the University of Liège, Belgium. Her master’s thesis was dedicated to Galileo cycle slip detection under extreme ionospheric activity. In 2015, she joined M3 Systems Belgium as project engineer in radio-navigation and is involved in GNSS reflectometry and GNSS hybridization projects.

The objective of the MISTRALE project (Monitoring soil moisture and water-flooded areas for agriculture and environment) is to provide RPAS/UAS-based soil moisture maps. To do so, it relies on an innovative use of the GNSS signals: reflectometry (GNSS-R).This approach consists of comparing the direct signal with those reflected by the ground. In the context of the MISTRALE project, both GPS and GALILEO signals will be used, which will improve system performance.

In July 2015, two experimental flights were conducted in France with the aim of validating the technical feasibility of the project concept. The analysis of the data collected has shown promising results: high-reflectivity values were observed for rivers, basins, or irrigation canals, whereas the low-reflectivity values were associated with dryer areas or with a higher presence of vegetation. We will continue to follow Laura’s project as it progresses.