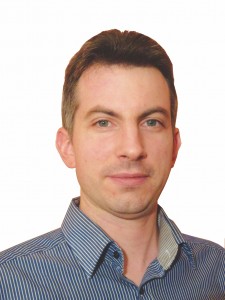 IF IT HASN’T ALREADY HAD AN IMPACT ON YOUR INDUSTRY OR PROFESSION, the open-source software movement likely will soon. For more than a decade in the geospatial realm, open-source software has proven to be a viable path; small firms, large corporations, cities, states, agencies, and even entire countries have instituted “consider open-source-first” policies. It’s not just about cost savings—but also excellent solutions.

The development environment for open-source software is that of global collaboration. Developers from all over the world can work code together through online collaborative sites such as GitHub, and this com- munity of unsung heroes has its own leaders.

Shortly after the release of last year’s “40 under 40,” the open-source geospatial software development community began “Twitter storms” for this year’s selection; a prominent name was Even Rouault.

Even is a software developer who uses geospatial tools such as GDAL/ OGR, developed as open source and governed by a project steering committee under the Open Source Geospatial Foundation (OSGeo). Even is currently the chair of that steering committee and has been a key developer and maintainer since 2007. His popular developer’s blog about tips and tricks and GitHub resources—and his company Spatialys—are all about collaboration: sharing ideas, code, and solutions. Even precisely represents the spirit of the geo-open-source development community.