For land surveyors and others in careers that rely on constant use of GPS and GNSS technology, not to mention the millions of consumers with receivers in their smart phones, it is easy to forget that instant location remains technologically miraculous, relying as it does on satellites, specialized receivers and chips, and even on the relativistic equations discovered by Albert Einstein. Somehow, precise location has become so ubiquitous and functional that most of us take it for granted. 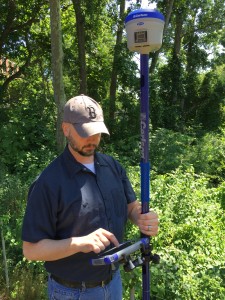 In other words, GNSS has become an exceedingly mature technology, one that creates challenges for engineers. It is no longer enough simply to provide accurate positioning anywhere in the world—users of GNSS receivers now expect lightweight, easy-to-use receivers that are optimized for their particular workflows so they can work efficiently and precisely… and prices should be reasonable, too. Meanwhile, the equipment-manufacturing process also has matured; design and production of sophisticated instruments, from concept to market, now take months rather than years and rely on global teams of networked specialists.

These were the challenges and opportunities being considered at Carlson Software in early 2015, when they decided to bring a new GNSS receiver to market, a receiver optimized for land surveyors and genuinely state-of-the art in terms of precision, convenience, and form factor.

“We work closely with land surveyors, and we definitely saw a need,” says Carlson’s director of special projects Karl Nicholas. “For one thing, our clients were asking for smaller and lighter receivers. And we also felt that a new receiver could be better optimized to work with the multiple satellite constellations now available, and with the array of RTK solutions that surveyors use routinely. So we got to work.” That inspiration led to Carlson’s new BRx6 GNSS receiver, now available. The design and delivery process responsible for that rapid production process is quite interesting.

Carlson was clear on the performance and features needed in a new receiver, and making it themselves was certainly an option. But not a particularly desirable option; since 1983, Carlson Software has focused on, “CAD design software, field data collection, and machine control products for the land surveying, civil engineering, construction, and mining industries worldwide,” while also developing a renowned real-time customer service system. Becoming a hardware firm might dilute this focus.

Like many firms in similar situations, they sought out a partner for the manufacturing process, and in this case they did not have to look far. Carlson had previously worked with Hemisphere GNSS when designing and producing their BRx5 GNSS receiver as well as rugged components for Carlson’s machine control business. It made sense to work with them again.

“We like working with Hemisphere,” says Nicholas. “They’re committed to being a world-class provider of dual-frequency precision receivers, and they have a thorough understanding of the way precision corrections work due to their Atlas GNSS global correction service. So we came to an arrangement that allowed each firm to focus on our respective core expertise—it’s a very logical relationship, and definitely a win/win that drives growth for both firms. And most importantly, it made sense for our customers because it was the fastest way to make a truly innovative receiver.”

“We are not a ‘take it or leave it’ company,” says Hemisphere senior product manager Lyle Geck. “For us, it starts with a conversation, and the conversation never really ends. We want our OEM [original equipment manufacturing] partners to find us flexible and accommodating.” In this case, Carlson was the partner, but Hemisphere saw an opportunity to serve two niche markets; Carlson and their land surveying clients, and Hemisphere’s own marine survey and OEM construction clients.

Hemisphere’s conversations with Carlson started in May 2015 and continued for months as specifications for particular functions and features were identified and as various prototypes became available for testing and feedback. Specifications included:

“Our hardware design and manufacturing division located in China presented a hardware design that we really liked, so we didn’t have to redesign from scratch in that area,” Geck explains. “It was a good design for Carlson and for us, so we were able to move ahead with only minor modifications.” This is a good example of the way global partners are able to work together synergistically.

Carlson, of course, did due diligence before signing off on the hardware design. “I’ve tested it,” Nicholas says cheerfully. “I put mine on top of a two-meter pole and dropped it onto concrete and dirt, and I also tried it out in wet weather—worked fine!”

In addition to traditional RTK correction methods using NTRIP and UHF/900 MHz radios, Hemisphere designed their own L-band correction service called Atlas. Atlas is a subscription-based, flexible, globally available (from 75ºN to 75ºS, covering all the Earth’s landmass) correction service that relies on approximately 200 reference stations worldwide to provide up to sub-decimeter accuracies vial L-band satellites or over the internet. For Carlson’s customers, that means correction accuracy sufficient for most survey work is available in any region, even where other RTK networks aren’t available or are compromised. “Detailed testing performed by Carlson shows that Athena is a world-class RTK engine,” says Nicholas. 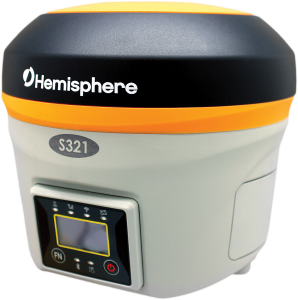 For Hemisphere, a typical use case for the BRx6 (their version is actually called the S321) is to be set up in a port and used as a base for construction or other maritime operations, and Carlson also saw the need for at least occasional use as a base in construction and surveying operations. Accordingly, the Atlas-enabled BRx6 can be set up, basically, anywhere, and, together with Hemisphere’s BaseLink technology, serve as an accurate base station.

“It isn’t a closed system,” Geck says. “It works well with Atlas, of course, but other protocols, like TrimTalk, are also supported, and external radios can be connected as needed. We understand the fact that, on a construction site, it is not uncommon for there to be multiple types of machines and radios operating at once. We designed the BRx6 / S321 to excel in this open communications environment.”

For example, “We worked with Hemisphere to add accelerometers and a compass and a tilt sensor,” Nicholas says. “So the receiver knows if the pole is vertical, and how it’s oriented horizontally, and can correct for those factors. And it’s also handy for things like stakeouts, and recovering points—the unit can direct you to the next point, graphically, which saves time.”

The new receiver’s SureFix technology is another good example of a productivity feature. “It’s common for surveyors to be working in areas with lots of trees, buildings, and other obstructions,” Geck explains. “In those conditions, position reliability will often degrade. Surveyors are aware of this, but it’s hard to compensate when they don’t have information about just what’s happening with accuracy. SureFix uses proprietary algorithms and various inputs to give a ‘quality indicator’ for particular points.” In other words, SureFix can raise confidence when shooting in difficult multi-path conditions or let a surveyor know when he needs to slow down to get the precision he needs. This improves fieldwork, and can eliminate trips back to the field to correct errors.

“This is a great feature, and we’re pushing it,” Nicholas says. “One of the really nice things about SureFix is it lets surveyors know if they have the accuracy they need before they leave a point. And if they really need an ultra-precise location, SureFix will let them know to stay a little longer until they have it. Our customers appreciate that kind of information.”

As part of the development process, Carlson—and Nicholas personally—tested features like this. “We verified that it really does make a big difference when working around trees and other obstructions.”

The BRx6’s design and manufacturing process is a good example of the synergies available when partners work together. Carlson Software was able to leverage its 30+ years of experience in land surveying, and Hemisphere added manufacturing experience and world-class GNSS and RTK expertise. The result for their respective customers is a compact, state-of-the-art receiver that is tuned for the requirements and workflows of their daily projects.