An interview with the director of the GPS Directorate

Col. Steven P. Whitney recently answered questions about the mission of the directorate, and he debunked a popular myth about the GPS constellation.

The nickname for personnel of the GPS Directorate is “Green Monsters.” This graphic of the mascot was developed by Darryl Fukui, a contractor with Tecolote research Inc., who is an acquisition specialist with the GP Director’s Action Group.

Colonel Steven Whitney is the director of the Global Positioning Systems (GPS) Directorate at the Space and Missile Systems Center, Air Force Space Command, Los Angeles Air Force Base, California. He is responsible for a multiservice, multinational systems directorate that conducts development, acquisition, fielding, and sustainment of all GPS space segments, satellite command and control (ground), and military user equipment. The $38 billion GPS program, with an annual budget of more than $1 billion, maintains the largest satellite constellation in the Department of Defense.

A University of Minnesota Graduate (ROTC) and later a master’s in administrative sciences from George Washington University; Col. Whitney has held many leadership roles in space and missile systems for the USAF. As director of the GPS Directorate, Col. Whitney serves in a key liaison role for both the military and civilian end users, and in that capacity we approached the colonel for some quick Q&A, which he was enthusiastic to do. In talking to Col. Whitney, you immediately get the sense of how much he knows his stuff and is aware of our needs and concerns, and how proud he is of the work of his team: the “Green Monsters” (the nickname and mascot for the Directorate personnel).

xyHt: Describe the mission of the GPS Directorate.

Col. Whitney: In November of 2010, the name was changed from the GPS Wing to the GPS Directorate. We are a joint service effort lead by the Air Force. Our joint project office (JPO) “green monsters,” attacking problems–really going after them, with representatives from the Army, Navy, Marines, Coast Guard, NGA (National Geospatial-Intelligence Agency), and the civil communities. We work together as a team, designed with one goal in mind: professionals who are dedicated to acquiring, delivering, and sustaining the viable GPS capabilities for America’s warfighters, our civil users, and our allies around the world.

This is really our focus: the beauty of GPS. It is the passion that our people have. Our task in front of us right now, in addition to sustaining the current system, is a modernization effort. We are engaged in a massive modernization effort, a campaign across all three segments of the GPS enterprise. First, space: building the next generation of satellites, looking out beyond that to the next block after the ones that are currently in the built stage. Second, we are modernizing our ground control elements to produce cyber-hardened and more accurate systems. Third, we are updating all of our military GPS equipment to take advantage of these modernized signals.

And as far as the high-precision users go, we want them to take advantage of the added additional civil signals. We have the basic L1, L2, and L5 signals but have not stopped there. In order to get better corrections through the ionosphere, we’ve implemented a specific civilian L2C signal for the high-precision folks in the civil communities. Our deployment of the L5 signal is well under way, and L1C, a common signal format with other GNSS providers, will begin its roll-out on the GPS III satellite. All of that is there, but what it really comes down to for our team is how well we deliver this global utility that is GPS. 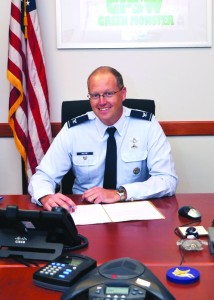 xyHt: How is the dual role for GPS emphasized among your team?

Col. Whitney: We’ve been dual use since inception; it was the way the system was designed. This was codified in executive orders from presidents Reagan and Clinton that basically gave this capability–this fantastic capability–to the world. A few years ago, the U.S. Space Foundation went so far as to label GPS, in their view, as one of the greatest inventions, if not the greatest invention of the 20th century–right up there with powered flight. Now, when I have to defend a program in front of the Pentagon and Congress, I have to talk about the military use, as this is funded through the DoD (Department of Defense). But we have to emphasize the dual use; and it is easy to provide compelling examples.

You see it every day in what surveyors do, and in the agricultural capabilities. I was just in South Dakota for a family vacation and watching the farmers on their massive combines, cutting up crops and putting down precision sprayed fertilizer to centimeters – it’s truly amazing. The Commerce Department did a study just last year on the impact of GPS on the US national economy annually and came out with a number of $75 billion – billion with a B. The study acknowledges that figure is underrated; there are a lot of things where they essentially said “we don’t know how to quantify that – it is clear there is an impact – but don’t know how to quantify that in dollars so we took it out.” $75B a year plus–that’s just incredible–and it is free. I emphasize that dual role to my team, and when we go out to speak publicly about the system. My kids never really connected with what I do until Pokémon Go! came around. It is kind of funny how something popular connected the dots for so many people – especially young people. For the first time I my professional career I can go out and tell people what I do, and they say “hey, we use that all the time!”

xyHt: There us a lot of talk about resiliency for PNT and initiatives like Project Sextant; how is the Directorate involved in such efforts?

Col. Whitney: Project Sextant was specifically led by The Aerospace Corporation across the street. [The Aerospace Corporation is a federally funded research and development center that has had a key role in the development of GPS and other satellite and missile systems – see the September issue of xyHt for more on Project Sextant]. They provided experts and utilized a lot of Aerospace personnel in our office–national treasures in terms of their intelligence when it comes to GPS–and they supported the study. I was briefed at the end of the study and offered suggestions for things they might look at going forward.

I look at it the question of resiliency as bigger than just Project Sextant. Resiliency in my mind encompasses many, many things. Let’s say I am a war planner and I realize that my enemy has a strategic reliance on something that is known, that I can go after. This is along the lines of Col. John Wardens “center of gravity” mindset. Once I know what an adversary would be thinking and pursuing we have got to do one of two things – or both. We either have to diversify, and/or we have got to harden and protect.

At the GPS Directorate, we focus really hard on harden and protect, through our task to modernize the enterprise, but we fully support diversification as well. General Hyten’s space enterprise vision is taking a look at all of this. Resiliency comes in many forms; we talk about different spacecraft, different orbits, talk about additional forms of navigation about using other GNSS systems – those and more are things we support the discussions on.

xyHt: We see major announcements about modernization: GPS III, L5, etc. Are there also incremental updates to each satellite launched?

Col. Whitney: There are, but the biggest thing is that most of the capabilities are installed in different blocks. For example, GPS IIR satellites brought in a new kind of time-keeping system technology, and GPS IIF brought in a better rubidium atomic frequency standard.

In many ways, this modernized time element is why we are seeing such fantastic performance. Right now our best GPS day was back in May of this year–we had an average error rate on signal from space of 36 centimeters. Think about that for just a minute! In the early days of the constellation we would be lucky to have error rates of multiple meters.

Sometimes it is little improvements that the user does not see: we’re updating the batteries on GPS III, and that will come in on vehicle 5. You mentioned the SAR GPS reflectors; those are scheduled for the next block, starting out at satellite 11 and beyond.

Our team of professionals is dedicated to putting the best capability on each craft moving forward and providing the gold standard in PNT. This government and industry team is so dedicated to and is so passionate about these goals. I’m really proud of my “green monsters.”

xyHt: Could you help put a GPS urban legend to rest? There are persistent rumors that the USAF “moves the satellites around,” reacting to security news in different parts of the world. Some users tend to jump to this conclusion rather than troubleshoot their own equipment or settings or consider other local factors.

Col. Whitney: I know that people picture us driving the satellites around like in a Bond movie, but the reality is limited by orbital physics. It is tough to picture as our daily lives are grounded in Newtonian physics; my feet are always on the Earth and I can move in the X, Y, and Z. It is tough to switch to a Keplerian frame of mind where I’m in orbit and rotate around celestial bodies and such.

The constellation itself is officially listed as 24+3 to maintain our requirements. It is a global constellation. The satellites are in six orbital planes, and they constantly move around the Earth; they make a revolution around the Earth every 12 hours. In actuality, we do much better than this with 31 satellites on orbit in operational usage.

There are times that the 2nd Space Operations Squadron out at Schriever Air Force Base in Colorado will make modifications as to where these things sit within their orbital slot and make minor adjustments to maintain better positional accuracy. But every time they do that they take that satellite offline and out of the operational constellation, so the user wouldn’t see it until it is back to within standards and they’ve turned it back on. Every time this is done, notices are issued about such changes.

The bottom line is that the satellites are enabling this incredible 36cm performance, constantly moving in these six planes. Orbitally speaking, it is not really possible to shuffle them or to have them hover over one spot. We want to emphasize to the end users that in trouble shooting, the last thing that [the problem] would be is the constellation. They need to go through a number of other processes of elimination — thinking of the constellation first means they might be missing the real problem.

That being said, I would encourage users who experience persistent issues even after troubleshooting to contact the official “support line” for GPS–NAVCEN–which is operated by the U.S. Coast Guard [read xyHt’s profile of NAVCEN]. The center has been designed to handle inquiries about performance of GPS and other navigation systems. They can tell you about and you can sign up for NANU’s (Notice Advisories to Navstar Users) published all the time. Receivers typically enable users to take into account the status and health of the satellites.

I love that urban legend almost as much as the urban legend I tell my wife when she is driving down the freeways in Los Angeles: when she tries to take a wrong turn, I say, “Don’t you understand, I am the GPS director–I can tell you where to go!” 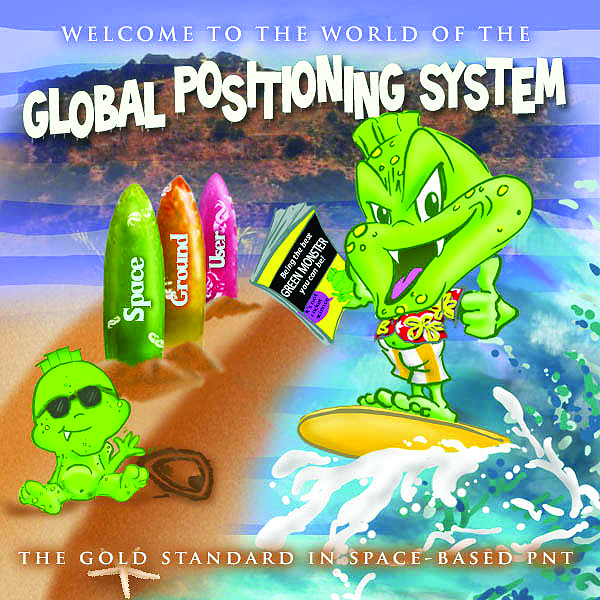 “The Green Monsters of GPavin” Comments