Intuicom’s RTK Bridge has come a long way, including use for hydrographic surveying.

Editor’s note: A product name can become a default term for a particular solution; this is the case with the RTK Bridge, a trademark name for the product that Intuicom, radio communications component company, began working on nearly a decade ago. And true to the name, it serves to bridge several types of gaps in real-time kinematic (RTK) GNSS field use. The RTK Bridge rollout was helped by a small market and little development along the same lines by other firms. But as the broader adoption of RTK—for surveying, construction, mapping and agriculture—blossomed, so did sales and further development.
One of the Achilles’ heels of RTK was the invisible tethers, the twin distance limitations of baseline length (degradation of results over distance from the base) and the range of the base radio. As mobile wireless and cellular coverage expanded, the rise of RTK networks resolved much of the baseline length issues, but the challenge remained of cellular “holes” or fringe areas with no cellular coverage (nicknamed by many RTK users a “cell hell”).
People have come up with makeshift solutions for bridging gaps, but the situation was ripe for a standalone-all-in-one solution. The original bridge served to extend the range of the corrections beyond the edge of cell range through a base radio (modem and radio built into the same device).
Today’s RTK Bridge evolved from the original simple design into a sophisticated portable communication hub that can serve to relay not only RTK but also data for an entire job site (or sites). We asked Intuicom’s Michael Irvin for an update on features and to provide a case study, in particular an example of the growing use of the bridge for hydrographic surveying.
If you aren’t familiar with the bridge or are familiar only with the early models, enjoy the following. Intuicom deserves bragging rights—their RTK bridges are popular, and users are finding new things they can do with them all the time.

Living on the Gulf Coast, you learn to appreciate the spaciousness the water and the far-off horizon paint; that is until you need to survey on that canvas. That is precisely the challenge that coastal surveyors confront on a regular basis.

Charles Wixley, project coordinator for a predominant geospatial surveying company based in Louisiana, was tasked with researching products and developing procedures to help crews in the field improve their efficiency.

“We do work on the inland waterways,” says Wixley. “Trying to get long RTK shots out in the Gulf, or on the barrier islands off the coast, is a chore. It was then that I saw an article talking about a product used off the Gulf Coast to get 30-mile RTK shots using 900MHz directional antennas and stuff.”

The product turned out to be an RTK Bridge from Intuicom, Inc. Wixley added this piece of equipment to his inventory and immediately put it to work.

“We were running two boats, both trying to do RTK work over great distances,” recalls Wixley. “They were travelling anywhere from 30 to 60 miles a day, in and out of waterways, getting to particular sites and a lot of waterway cross-sections that we wanted to use an RTK solution on.”

Had they relied on a traditional base station over a known control point, every so often they would have had to stop their progress and go back, pick up the base station, move it to a new control point, and then reestablish and continue from there—a time-consuming and arduous task.

“Instead of doing that, we put the RTK Bridge on one of the boats and it began capturing corrections off of the GULFNet RTK Delivery Service immediately,” says Wixley. “We didn’t have to occupy a known control point. The boat was our base at that point.

In this situation, the rovers didn’t require any special equipment. They were communicating on regular radio frequencies like they normally do. What was different was that Guidry and his crews were capturing RTK corrections and rebroadcasting them from a moving platform: in this case, two boats (Figure 1).

One boat had the RTK Bridge and an RTK rover on it, and the second boat had only an RTK rover. As each boat moved around, it was getting RTK corrections from the RTK Bridge. As the boats progressed along the coast, the RTK Bridge would simply reinitialize as needed in order to stay current with GULFNet and report its position back to the GULFNet real-time network as they traversed the waterways. This strategy saved Wixley and his teams a tremendous amount of time, enabling them to remain on schedule, even with the uncertain environment they encountered.

A Change in Mindset 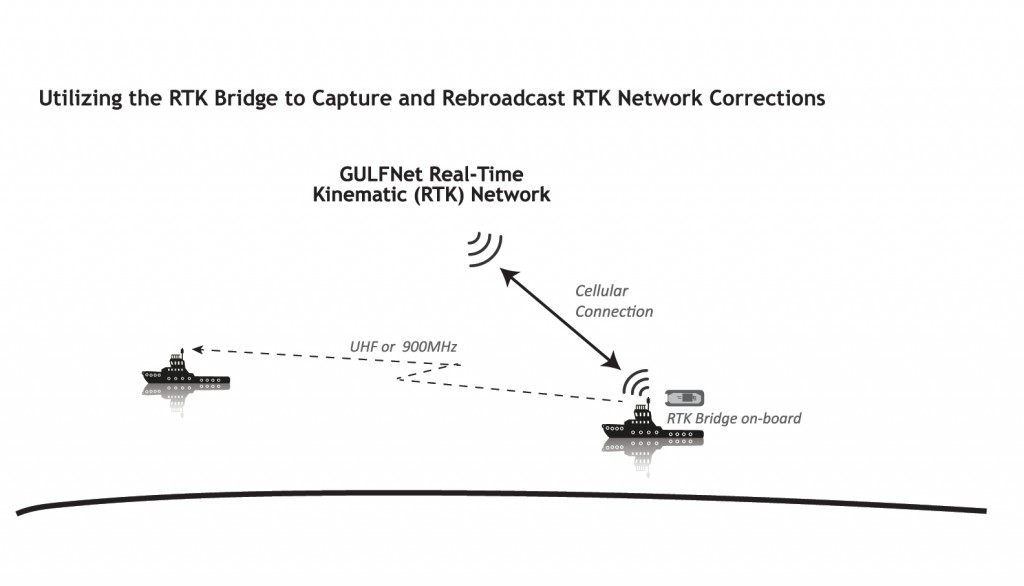 In hindsight, the biggest challenge that Wixley faced was explaining to his peers how he captured accurate corrections in this mobile deployment. “It takes a little bit of time and a little bit of drawing on a whiteboard with some big old crayons to get the concept across,” emphasizes Wixley. “The challenge is that they are so traditional in their mindset that you need a known control point in order to be accurate. They understand now the flexibility and functionality the RTK Bridge brings to the job.”

This advanced functionality is not limited to mobile deployments on waterways. Another situation was on a job in a heavily wooded area: they had two crews in the field with rovers operating within a mile of a base. Everything was progressing as normal until they encountered a thicket of trees that actually was blocking radio frequency transmitting from the base. As a result, the rovers couldn’t initialize. When the party chief saw what was happening, he immediately called Wixley to discuss options, one of which was using the RTK Bridge as an alternative means of transmitting corrections (Figure 2). 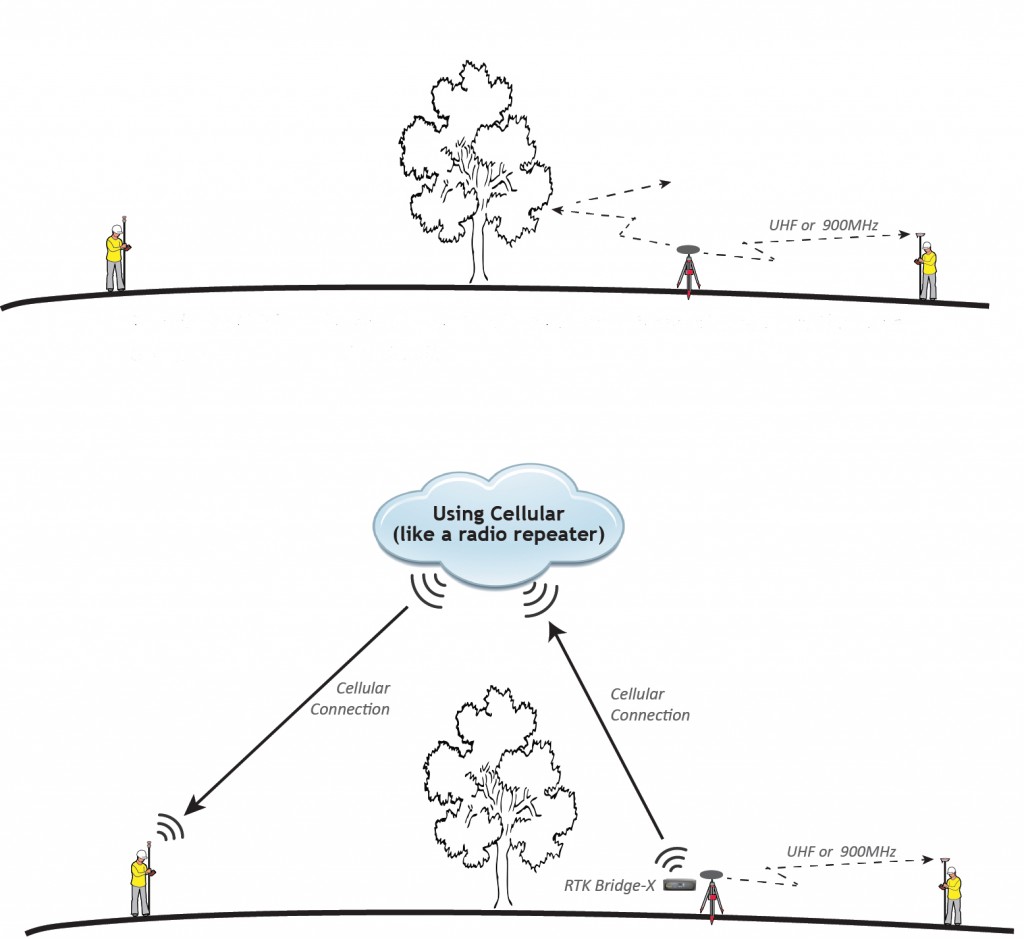 “Since both rovers were using Trimble TSC-3 controllers with SIM cards inserted and had good cell connectivity, we were able to use the cellular connectivity that the RTK Bridge provided to reach over the trees,” Wixley notes. “In this case, we set up to rove off the internet using the Base-to-Socket mode on the RTK Bridge, getting corrections from the base without having to rely on the radio to do it. Without the RTK Bridge we would not have completed that project on time.”

With this flexibility and ease of local deployment in the field, RTK Bridge-X users experience improved correction reliability with dramatically reduced interference. The amount of time it takes to set control is minimized because you’re already in a network. The result: quicker setup and more billable hours—which both equate to increased profitability.