MOBA uses NavCom GNSS receivers for assisted guidance on dozers and excavators. This results in decreased over/undercuts for dozers and graders and eliminates the need for continuous staking for excavators as the machine performs its cut and fill operations,

MOBA incorporates NavCom GNSS receivers into its platform with MOBA’s software and user interface, which also controls many other facets of the machine platform.

“We give them an accurate position” said Morris. “However, we’re only one of a large variety of sensors that they need to accomplish their job. 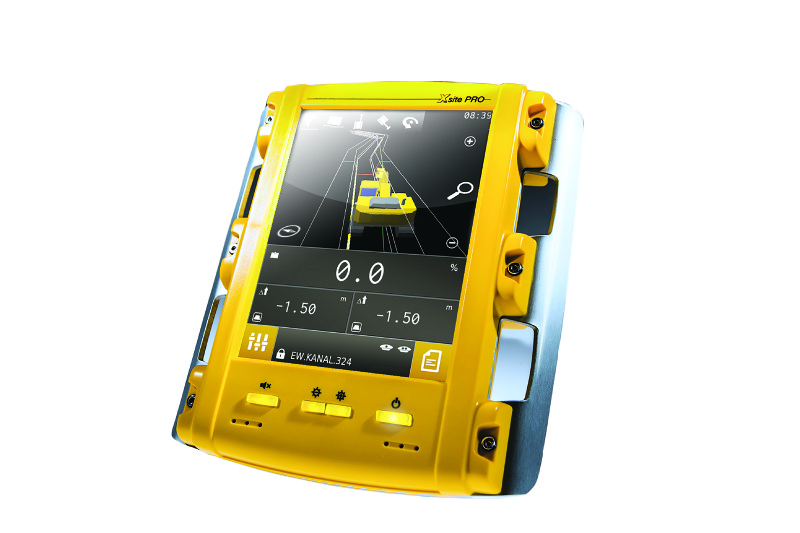 Systems developed by other machine control solution manufacturers are quite complex and require a GNSS-knowledgeable individual to operate them, said Morris.

MOBA builds its controller–which is the customer-facing software–for the normal machine operator. They are taking out the complexities of GNSS and tailoring the user interface for the operation of those specific devices using a language that is well understood among that demographic.

A key challenge for manufacturers of earth-moving equipment is to make the job as easy as possible for the operators while giving them all the benefits of a 3D system,

said Jrg Schittenhelm, MOBA’s product manager for 3D machine control. He studied surveying in Germany and is now responsible for 3D systems for dozers, graders, and excavators at MOBA.

While 2D systems already give operators more options, the trend is to have more challenging designs that can only be finished using a 3D system,

The challenge is to provide operators with an easy-to-use 3D system for their applications. We focus less on packing all the features there are in the world into one system, because we know from experience that that is confusing to operators. We like to keep our system very easy to use.

Dozers are normally used to do rough grading, such as in preparation for building an industrial complex or a highway. Graders are normally used to do fine grading, especially for roads and highways. Excavators are used for many tasks, from such classic ones as digging foundations for houses to precisely grading slopes along highways to reduce noise. Different levels of accuracy require different guidance interfaces.

While 2D systems already give operators more options, the trend is to have more challenging designs that can only be finished using a 3D system.

It’s all about creating a defined slope and a defined height, said Schittenhelm:

Our excavator system displays the current height information for the driver in the cabin. On graders and dozers, we can control the height and slope of the blade automatically, according to the design.

Additionally, he pointed out, MOBA can provide to its customers a GNSS base station (and a surveying rover), which outputs correction values to gain the required RTK accuracy.

We put the base station on the construction site to broadcast the correction values that we need to obtain the high precision of the NavCom receiver on the machine. On top of that, we can also offer the NavCom surveying solution, LAND-PAK, for any staking or boundary work that needs to be accomplished on the job site.

On dozers, MOBA’s system measures the height of the blade directly, with a mast mounted antenna on it. It then combines that data with the data from a slope sensor to control the blade’s angle of attack (tilt). This sensor fusion enables the controller to automatically steer the dozer’s blade to achieve the required result.

On excavators, the system is “a little bit more sophisticated,” said Schittenhelm. The GNSS receiver measures the 3D position of the back of the machine; then, using inputs from inclination sensors on the boom, the stick, and the bucket, and considering the geometry of the excavator, MOBA’s controller calculates the height of the bucket. The data from all the sensors are displayed graphically in the cabin so that the operator always knows the height of the edge of his bucket and other relevant information.

MOBA is beginning to expand its business, first focusing on the European marketÑGermany especially. It also has customers in the United States. Though none of them currently works with 3D, our plan is to expand this 3D capability to the United States as well as our other subsidiaries once we have established a support network.