The sun is barely rising above the water along the Florida coastline, but groups of people are already walking the beach, notebooks in hand, eyes focused on the sand, pausing, kneeling, pointing. They are here as they are every spring to fall searching the beaches to find and identify new tracks, known as crawls, left by sea turtles.

Over the past five decades, human activity has caused sea turtles to become an endangered species. Kemp’s Ridley, the smallest and most endangered sea turtle species, dropped from an estimated 42,000 in 1947 to about 700 in 1985; it began to rebound in the 80s and in 2003 its population was estimated at about 8,200 adult females who predominantly forage in the northern Gulf of Mexico.

This important routine has been carried out since 1979, when the FWC started the Statewide Nesting Beach Survey (SNBS) program to document the total distribution, seasonality, and abundance of sea turtle nesting in Florida. Another program, the Index Nesting Beach Survey (INBS), was established in 1989 to survey a subset of SNBS beaches. Designed to measure seasonal nesting, the INBS collects additional data such as nest inventories on 27 beaches statewide to help monitor the success of nests (or clutches) at each beach.

As a critical nesting ground for sea turtles—Florida hosts nearly 90 percent of the endangered Loggerhead species—survey teams focus on five different spe­cies—Loggerhead, Green, Leatherback, Kemp’s Ridley, and Hawksbill––and record their activities. Until now, however, collecting this data has been a manual exercise using pen and paper and manually inputting data into spreadsheets.

“With this time-intensive process it could take several months to tabulate all the data and produce essential reports that allow managers to identify wide­spread trends or problems,” says Andrew Williams, a GIS technician in the Florida Department of Environmental Protection’s (FDEP) Bureau of Natural and Cultural Resources (BNCR) division, which compiles and provides the collected sea turtle information from the Florida State Parks beaches to the FWC. “We also didn’t consistently receive all the data acquired from the parks and sometimes certain data was missing to complete a report.”

That all changed in 2020 when the SNBS went digital statewide. Instead of the clipboards, pens, and paper, teams used handheld GNSS survey devices and ArcGIS Survey123 software to record sea turtle data. The change has not only given managers the opportunity to visualize and analyze activity in near real time, it has awarded the FDEP (and BNCR) with a Florida TaxWatch Productivity Award, a distinction that highlights efficiency gains in work. 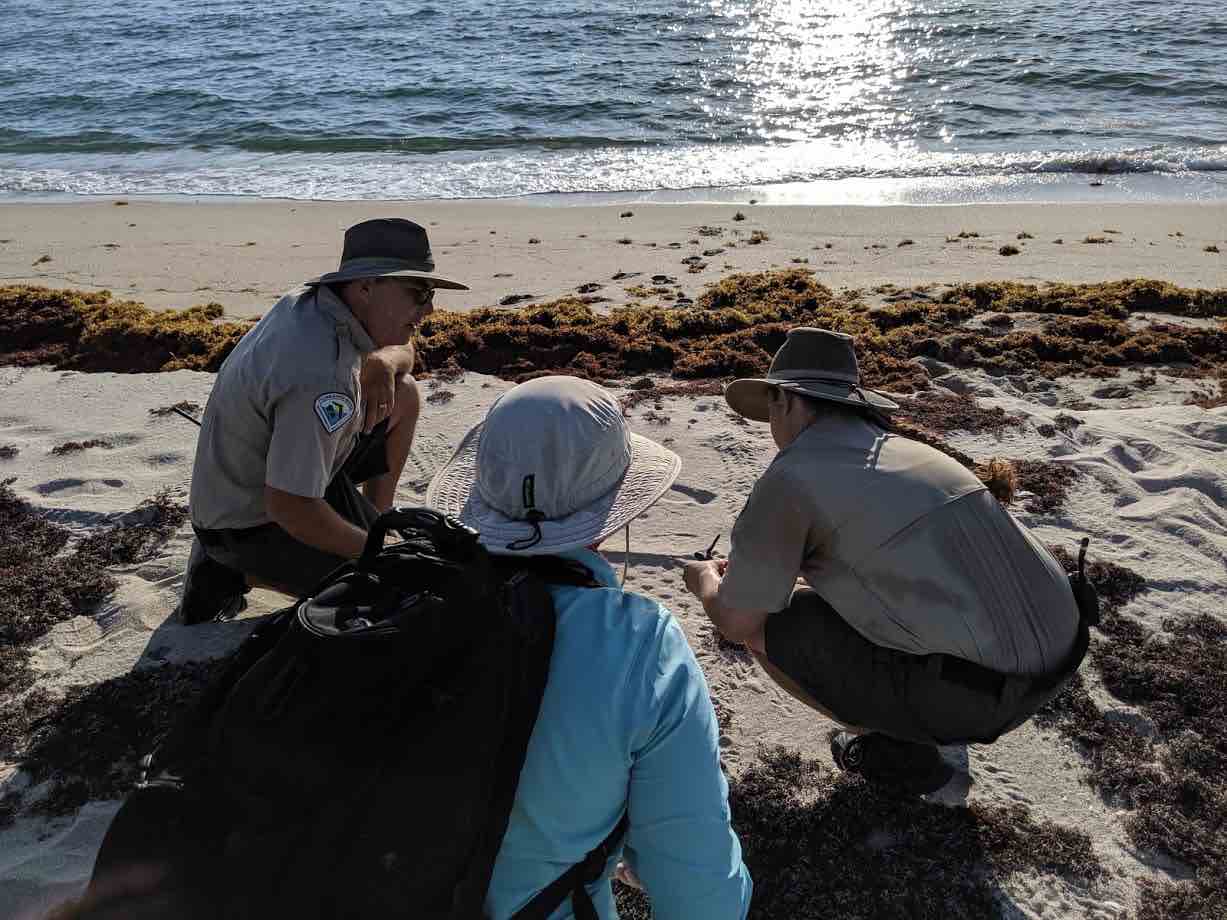 From paper to positions

The digital transformation began in 2017 with Williams and his colleague, Leah Gerlock, a natural resource specialist with BNCR and the statewide coordinator of sea turtle nesting data collection for the Florida Park Service (FPS). Having GIS backgrounds, they both knew they could make the data collection and dissemination process more streamlined and efficient with mobile devices and Survey123 field capture software.

“With a GIS-based data collection app, we could capture data digitally as well as visually and display the information through the ArcGIS online database, enabling specialists and managers to identify risks or issues in near real-time,” says Gerlock. “We couldn’t provide that dynamic and timely data environment with paper and pen.”

Equally important to acquiring GIS-ready field data was enhancing that data with consistent and accurate GNSS positions, location data that wasn’t always captured in the past.

To cover the roughly 825 miles of beaches and 40 different state parks in-volved in the SNBS, BNCR would need 50 to 60 mobile devices for data capture.

The units would need to be rugged enough to cope with the weather, saltwater, and rocky and sandy environment, and also be powerful enough to run the Esri software efficiently and provide sub-meter GNSS accuracy. In addition, the devices needed to allow users to capture data offline to avoid mobile connectivity issues.

After testing and narrowing down several handheld devices and tablets, BNCR launched a test in 2018 using a Trimble TDC100 handheld GNSS data collector. Working in conjunction with the FWC, they initially targeted only five parks, but the parks’ response was so enthusiastic they expanded the digital trial to 12. Confident the new digital survey app would provide the expected efficiency and precision, Williams and Gerlock trained a significant roster of individual park coordinators, staff, and volunteers on the Trimble-Esri system for the 2019 sea turtle nesting surveys. 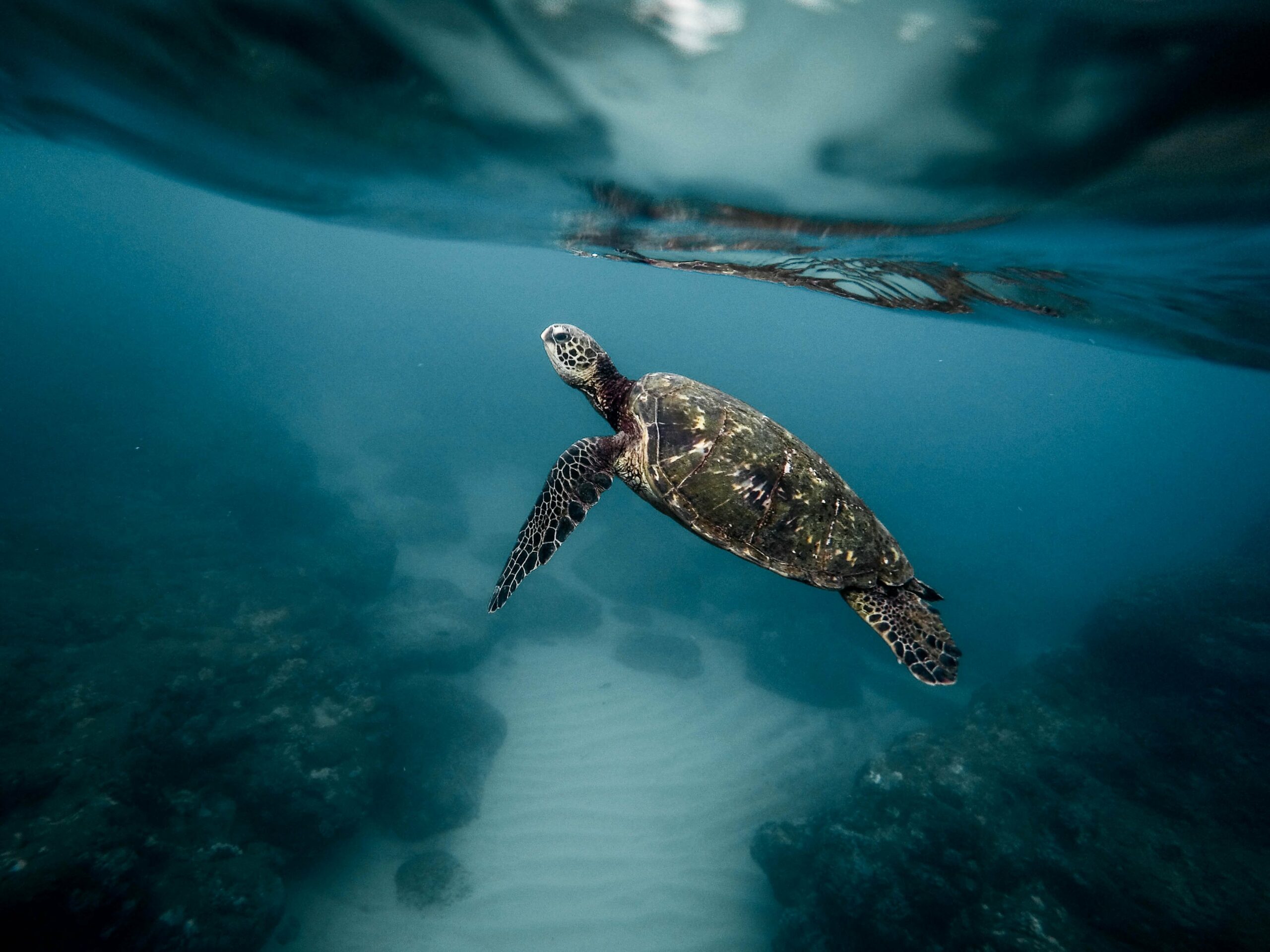 A young sea turtle in the ocean.

FDEP’s goal in 2019 was to work with as many state park beaches as possible using Survey123 and TDC100 devices, including all 15 FPS index beaches. In total, FWC had about 200 people involved in the new digital surveys.

Once field teams determined their areas of interest, they used the TDC 100’s built-in GNSS receiver to establish a highly accurate location to ensure the data collected met the required precision. Walking or driving ATVs along the beach, they searched the sand for any kind of activity such as crawls left in the sand or nest predation. When activity was found, they recorded their precise location to within one meter and documented the detail with drop-down menus in the Survey123 application. If surveyors observed no activity or were unable to conduct the survey due to extreme weather events, they also indicated that in the application.

Greatly assisting the data capture was the ease and intelligence of the customized Survey123 form. Surveyors could confirm their location using an offline base map included in the survey, and then choose the relevant data––crawl, false crawl, pre­dation––to record. Based on the type of activity they captured, the software would then prompt users to provide additional detail for more comprehensive attribute data. The pre-prepared customization enabled teams to not only capture infor­mation more quickly, it also ensured data collection was consistent in quality and content.

As data was collected offline, the program’s park coordinator reviewed each day’s data capture for quality control and then submitted the information to the database on ArcGIS Online for instant sharing and spatial viewing.

every state park,” says Williams. “That allowed staff and volunteers to use the same simple, yet comprehensive inter­face and capture accurate and reliable sea turtle activity in just a few menu clicks. Paired with the Trimble TDCs, we’re saving thousands of hours and the data is more accurate.”

Based on the success in 2019, BNCR expanded the Trimble-Esri system statewide for the 2020 season, equipping all 40 parks with the means and knowledge to capture data digitally. For the highest-density parks, they acquired nine Trimble TDC600 handheld devices to manage the vast data volumes.

Equal to the efficiency and accuracy gains provided by the mobile survey app, a significant contributor to BNCR’s success has been the dynamic accessibility and data analysis provided by ArcGIS Online.

BNCR used Esri’s Web AppBuilder to develop 40 customized, individual web maps for each of the FPS’ 40 parks. When park coordinators submit new data, both the ArcGIS Online is immediately updated as well as the web map for that specific park, making any new information available as soon as it’s received or edited.

Using other customized web applications and widgets, park coordinators and managers can quickly analyze their data on sea turtles and offer specialized information such as how many loggerhead nests have been reported to date or if a particular rare species has been spotted. They can edit data much quicker and easier, and they can export any data they need to create their own data reports. It’s a level of data sharing and visualization they’ve never had before.

The same is true for the BNCR and the FWC. With support from Aaron Koelker, a GIS systems project analyst with FDEP, Williams and his colleagues can use customized python scripts to quickly compile and convert data into the varied formats they need for each park’s monthly report to the FWC. That customization saves them substantial time. For the FWC, the responsiveness and completeness of the new data col­lec­tion system has provided entirely new insight to help protect and support endangered sea turtles.

“With our new survey app, once the records are synchronized with the database, it is possible to see the most recent nests around the state and know when and where nesting is occurring,” says Gerlock. “We can also identify when there has been an event involving a rare species in one of our state parks or where there may be issues with predation. This has allowed FWC to stay more informed and provide assistance faster than ever before.” 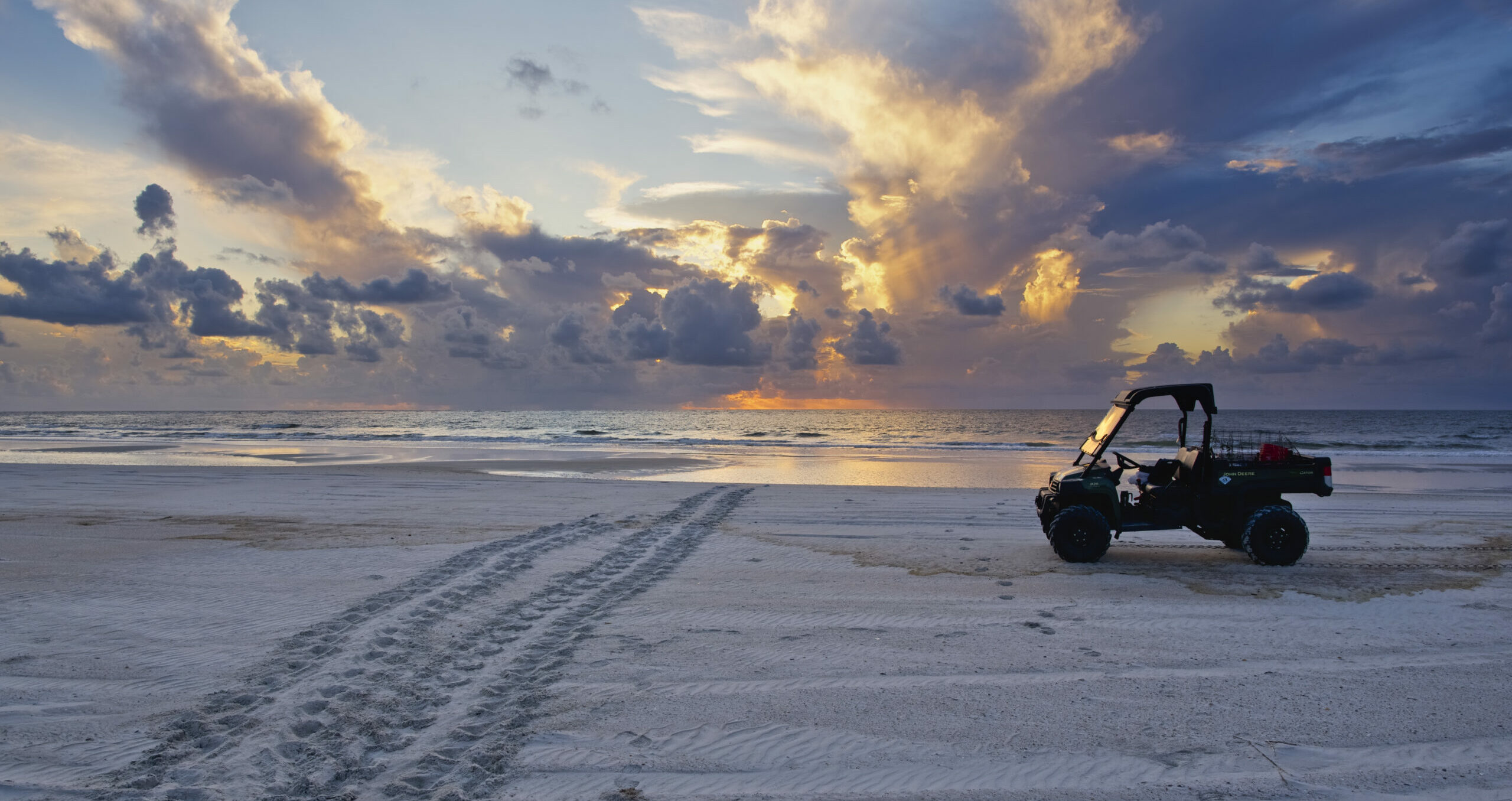