Years from now, paleontologists all over the world may have Tom Hebert’s 8-year-old daughter to thank for advancing knowledge and the speed with which data about dinosaurs discoveries and the ancient world can be processed and understood.

“One summer I asked her if she wanted to do a daddy-daughter trip,” says Hebert. “I was expecting her to say Hawaii or Europe or something like that. She said, ‘Let’s go dig for dinosaurs.’ So I found a company that takes you out to dig for dinosaurs.”

Emma, now 17, eventually lost interest in dinosaurs, but Hebert was so fascinated by digging for fossils of the ancient creatures that he sold his insurance business and enrolled in the geology department at the University of Wisconsin-Eau Claire. 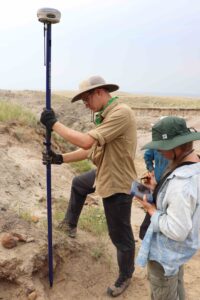 Sabrina Wagner and Jonathan Sargent use a Carlson BRx7 GNSS receiver to mark the location of a dinosaur fossil.

Forty-five years old and married with four children, Hebert was the prototype of the non-traditional college student, especially as he had tried the traditional college route after graduating from high school and did so poorly, “My grades weren’t exactly great the first time,” he said. “I was politely asked not to return.” On his second attempt, he is excelling with a 3.8 grade-point average majoring in geology and field biology, all thanks to that father-daughter fossil dig.

Hebert’s impact on the wider paleontology world goes beyond just being a good student. He is cutting new ground in paleontological research by developing a GIS-based map that is capable of centralizing, sorting, and analyzing fossil data from paleontological digs.

Hebert recruited a team of fellow UW-EC students and then connected with Ladd Nelson of Carlson Software who supplied the geospatial equipment, software, and training. Now Hebert hopes to solve one of the paleontology’s major stumbling blocks—the lack of an accurate, consistent, and precise data collection repository accessible to scientists, academia, and the general public.

“The team has developed and designed an innovative spatial database that integrates GIS technology and sub-centimeter GNSS equipment and technology such as that produced by Carlson Software for data mapping and sorting,” Hebert says. 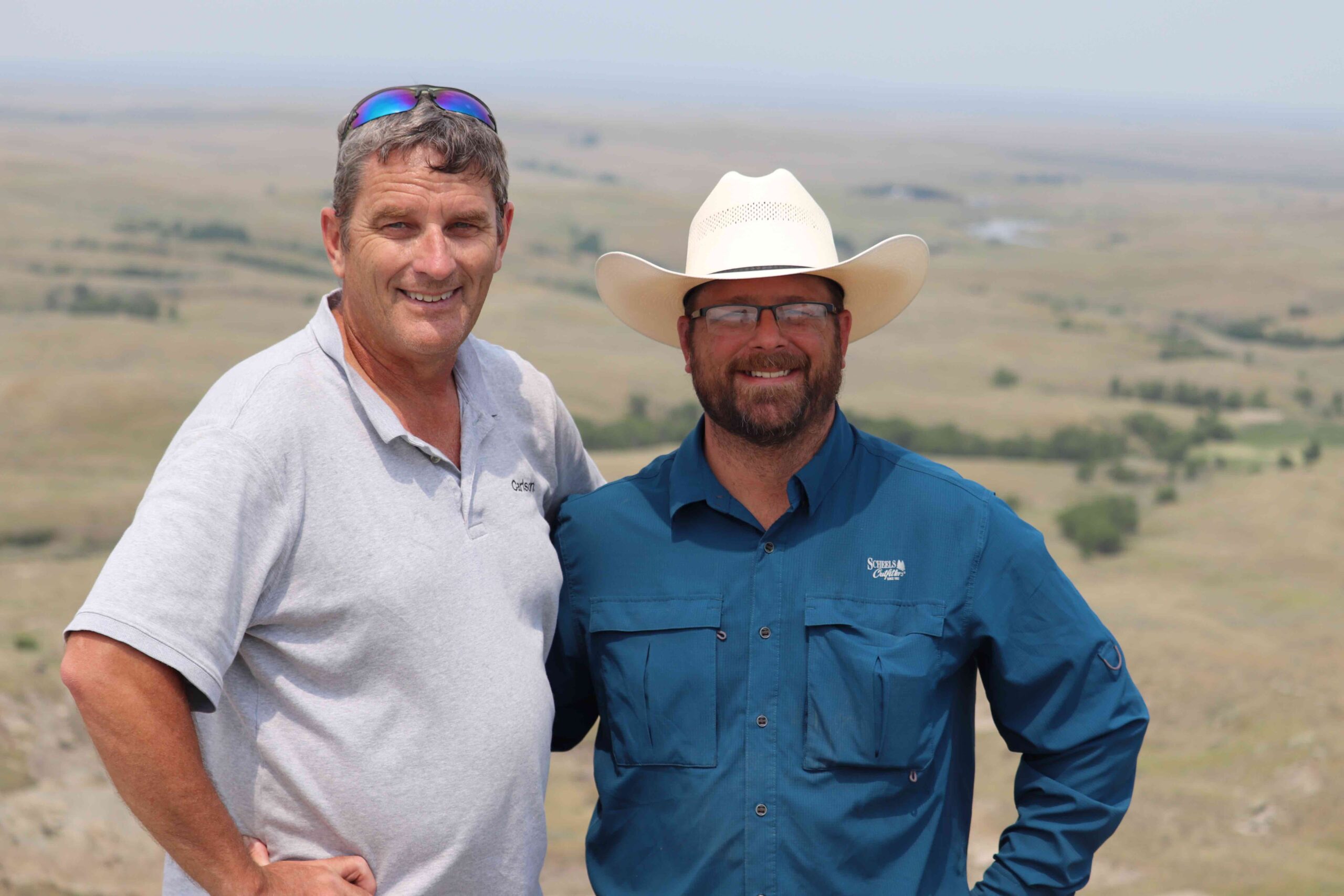 Hebert says the idea occurred to him during the 2021 spring semester. He was sitting in his GIS class and the informa­tion coming from the professor got him to thinking about how he had used GIS maps in his insurance business.

“I used GIS maps from the area counties to locate farms, farm owners, and landowners,” he said. “I remembered how I could click on a parcel of land and a pop-up window would tell me information about that specific parcel. This led me to the thought that I could do the same thing for mapping paleontological dig sites, where I could place the fossils on a map and when someone clicked on the point a pop-up would tell them about the specimen, where it was found, species, pathology, anatomical location on the
animal, etc. From there it took off and now the map is a reality.”

Initially Hebert was just going to do this as a personal side project. He emailed the chair of his department and asked if there might be other students interested in joining him. The chair emailed him back and told him he should make this a research project because no one else is doing anything like this.

So, recognizing that GIS maps take time, money, equipment, knowledge, technical skills, and more, Hebert sent out inquiries to major geospatial companies seeking assistance. Most were ignored or returned saying there wasn’t any interest in helping. But one of Hebert’s inquiries landed in Nelson’s inbox.

“I immediately connected the dots of what he was seeking to accomplish, and I was certain Carlson had the technology solutions that could bring his project to fruition,” said Nelson, sales director of the Midwest region for Carlson Software.

After reading Hebert’s synopsis of the project, Nelson knew the full-constellation capabilities of the Carlson BRx7 (including support for Esri Collector apps), along with tilt and UHF/Spread spectrum internal radios would work, as many of the remote dig sites would lack cellular or wide-area VRS network solutions. Given the rugged terrain, Nelson also suggested the Carlson RT4 tablet with SurvPC as it supports integration with Esri geodatabases, the environment in which Hebert ultimately wanted to store his data.

Hebert says the lack of accurate, consistent, and precise data collection of exhumed fossils is a major obstacle to developing consistent inferences and conclusions based on paleontological work. So the ultimate, though likely unreachable, goal would be to create a GIS map where paleontologists
worldwide would be able to contribute their data that would make every dinosaur discovery and the detailed information about those discoveries not only readily available to all but also sortable and far more easily analyzed than the current process of noting finds in a three-ring binder.

“You would have a global picture of the dinosaur world at your fingertips,” Hebert says.

But paleontologists are proprietary folks and not always willing to share the data they worked hard to develop. Even in today’s technologically advanced world, most archaeological finds are still catalogued by hand and researchers have to thumb though pages of documents to attain information. Hebert’s project proves that such a GIS map would work and the ultimate goal of getting all paleontologists to use it would be a boon of malleable information about the world as it was millions of years ago. 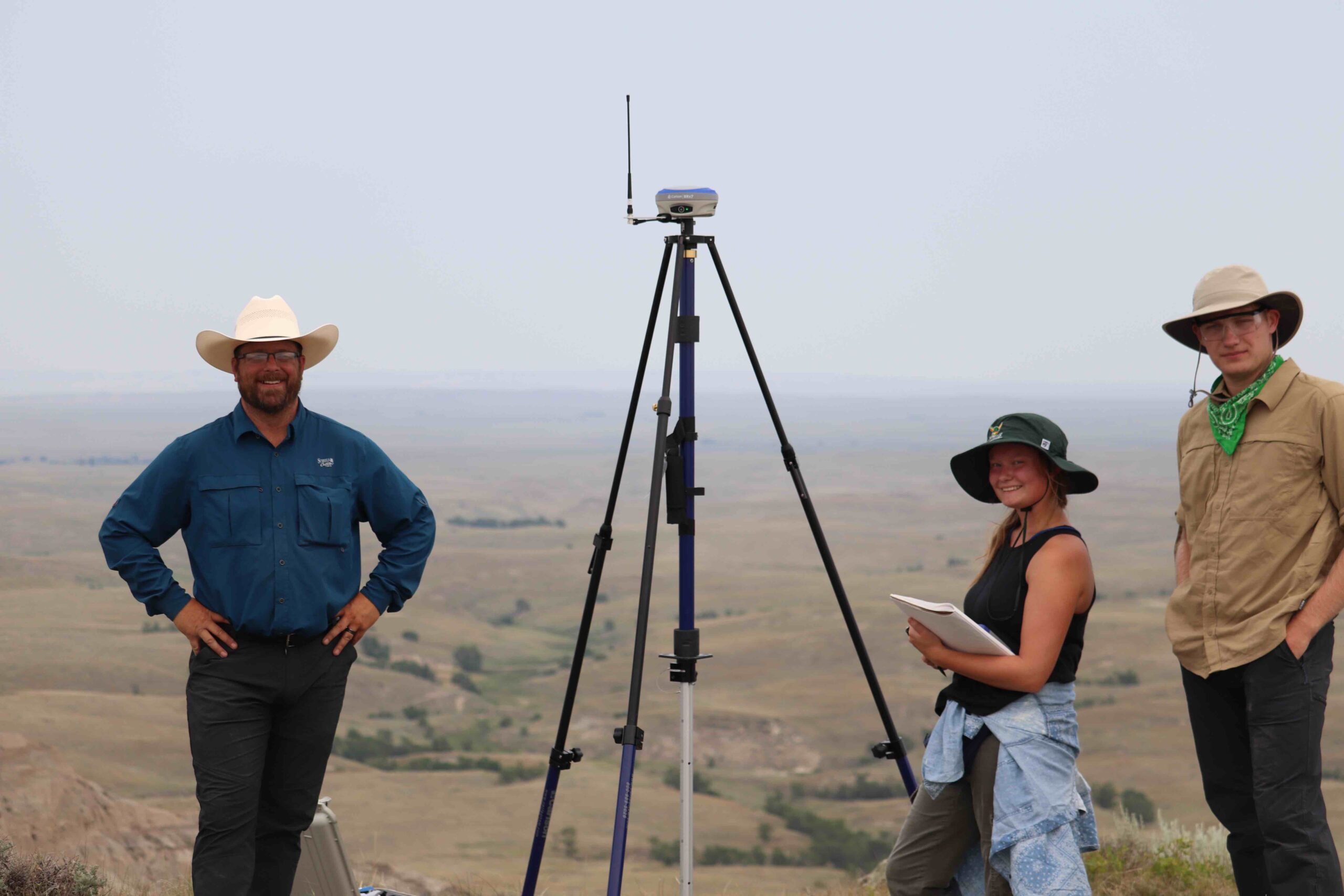 Tom Hebert, with Sabrina Wagner and Jonathan Sargent on a butte in western South Dakota using the survey marker from 1951 to get a fixed known position before beginning a paleontological dig.

While searching for a dinosaur destination for him and Emma years ago, Hebert came across Walter Stein, who specialized in family trips to dig fossils in remote Butte County, South Dakota. In recent years, Hebert has helped Stein guide tours, so Hebert knew he had access to a geological site known to contain dinosaur fossils.

The site in far western South Dakota is called the Hell Creek Formation, a 65-million-year-old geological formation of Upper Cretaceous and Early Paleocene rocks that spans portions of South Dakota, North Dakota, Montana, and Wyoming. The specific area of South Dakota where Hebert and his team would dig and map is known as the Tooth Draw Deposit.

“I knew I had this opportunity available. Hell Creek has been very well studied. It’s an intricate system of ancient formations,” he said. “There’s opportunity to find stuff that’s never been found before. I’m familiar with the site, so I knew what I was looking for. I knew we would find enough that I’d be able to map stuff.”

His familiarity with the site began with that father-daughter trip. Hebert went back several times and eventually became a guide for PaleoAdventures, a company owned by Walter Stein that takes guests on dinosaur digs in the Hell Creek Formation.

“After a few seasons Tom expressed more than the average interest level,” said Stein. “When Tom said he wanted to do this more seriously and was even considering paleontology as a career, we brought him on as a part time guide. Now, Tom is back in school and came up with a great idea for the GIS project. I’m looking forward to seeing the results.” Hebert and his team spent several days there in August finding and digitally cataloguing bones and significant specimens.

Prior to joining Hebert at the site, Nelson did his homework and found an established NGS marker remarkably close to the remote site. When he and Hebert got to the site, they realized the marker was on top of a butte in the rugged lands of Butte County, South Dakota. Keeping a careful eye out for rattlesnakes, he and Hebert and his team scaled the steep side of the butte, shouldering the equipment with the intent of using the reference marker and UHF radios to establish more convenient local control.

“Logistics mandated that we abandon the radio approach, so we opted to establish the position of the local base control point through the means of a static session that was uploaded to OPUS,” Nelson says. “Finding the NGS marker that was set in 1951 was a bit of a treat, and it makes one appreciate the efforts of past surveyors.” With local control set, the dig began.

In a previous dig at the site, a five-foot long section of a Triceratops hip was uncovered, so Hebert went with his new technology to map the first of many specimens to be cataloged.

“Once it was completely uncovered we mapped it,” Hebert said. “With the precision of the BRx7 equipment from Carlson we could go around the perimeter of the fossil and map vertices around the specimen to create a polygon shape resembling the shape of the actual fossil. With older, less precise equipment having a plus or minus of three meters this never would have been possible.”

During the August dig, dozens of scientifically significant finds were made, surveyed, and entered into Hebert’s GIS-based map for documenting critical site characterization of dinosaur fossil locations in the Tooth Draw Deposit.

While the geologic formation has been intensively studied, never have the findings been categorized using GIS technology. The map Hebert created now contains points that represent the location where specific fossils were discovered and excavated. The map integrates layers of data collected and categorized in fields such as specimen number, date of exhumation, GPS location, horizon, elevation, lithology, condition of specimen, morphology, species, discoverer, and a field containing photos of the specimen.

“From this map we will be able to see the larger picture and draw more accurate inferences about the conditions that existed back when the animals were alive,” Hebert says.

“Data contained in the map is searchable and sortable, enabling instant data integration and assimilation versus days, weeks, months, or even years examining and analyzing irreconcilable paper field logs,” he says.

“In theory, one map for all the fossils in the world would change everything,” he says, recognizing that such a collab­oration among paleontologists is likely impossible. “But we could also make individual maps for locations and create a mosaic with what we have. If we could get a worldwide map and database with all the information stored in it, we could create a global picture of animal populations as well as create a worldwide eco­logical map for the period. We could then take and relate this information from 65 million years ago to species proliferation today as well as climate issues from then to now. Our understanding of the ancient environment could move forward at light speed rather than at a snail’s pace.” 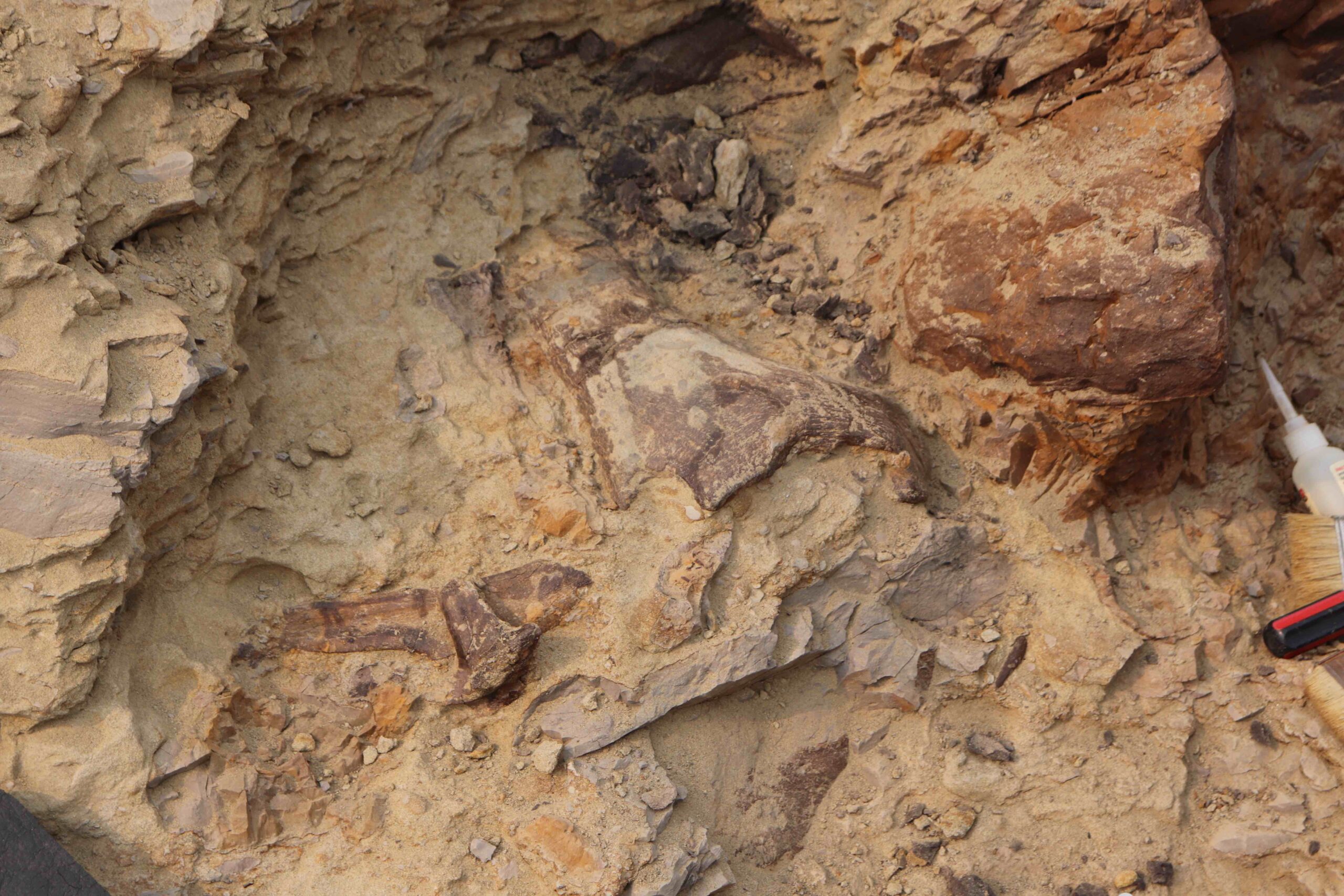 A left dentary from a Triceratops is one of the paleontological finds Tom Hebert and his team mapped in South Dakota in August.