This entry is part of 2 in the series Understanding GNSS 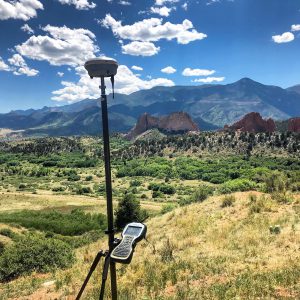 Part 1 covers ellipsoids, datums, and realizations and is in the April print issue. This final part covers vertical datums.

From my previous article: One of the most important things to understand when it comes to using survey-grade GPS systems is the difference among the many datums, reference ellipsoids, and coordinate systems that exist. If you do not understand what these systems actually mean, the results of your work are destined to be flawed and inaccurate at some point in your career.

The National Geodetic Vertical Datum of 1929 was established by the National Geodetic Survey (NGS) upon a mean sea level calculation based off of 26 tidal gauges around the U.S. and Canada. It was further perpetuated with the establishment of about 100,000 benchmarks throughout the United States.

After the vertical datum was developed, experts realized that sea level was actually not the same throughout the country. It turns out that several factors will greatly affect sea level elevation, including gravity, barometric pressure, earthquakes, and sudden coastal erosion.

Regardless of the found errors, NGVD29 was used for years.

In an effort to come up with a more accurate vertical datum to be used within the United States, the NGS began efforts to develop the NAVD88 datum, the latest and most precise vertical datum used in the United States today. During the development of this datum, NGS not only took into consideration that sea level is not actually level, but they also used satellite information to adjust for gravitational differences throughout the country.

You can see how these considerations affect the datum when you try to compare the difference between NGVD29 and NAVD88 in different parts of the country. In the Rocky Mountain region, the NAVD88 datum is typically more than three feet higher than the NGVD29 datum, while in other parts of the country it can differ by mere inches.

NAVD88 is based upon one tidal gauge found in Rimouski, Quebec known as Father Point/Rimouski. The mean sea level was observed, and that observation became the “zero mark” or basis for the entire vertical datum.

Note a major difference between the NGVD29 and NAVD88 datums. NGVD29 referenced 100,000 benchmarks and included approximately 102,724 kilometers of differential leveling; NAVD88 references 450,000 benchmarks and includes over 1 million kilometers of differential leveling. As you can see, it is pretty clear which datum would be the more precise of the two just by the amount of additional work that went into one over the other.

If you want to truly understand how orthometric heights (elevations on the Earth’s surface) are derived from these vertical datums, you’ll need to conduct much more research on the geoid. The purpose of this article is not so much to explain how all of this works but to give you a better understanding of the complexities that you’re dealing with every single day that you power up a GNSS receiver. 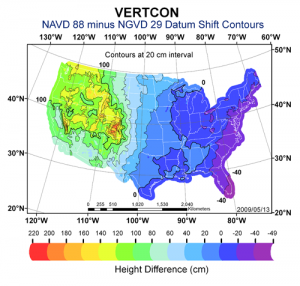 If you intend to integrate GNSS surveying into your practice, consider the following. One of the most common flaws among surveyors today is simply a lack of knowledge pertaining to new technologies. People are purchasing this gear, getting a quick demonstration of how to operate it, and then handing it to party chiefs to go complete important work with it.

It is not only important to our reputation as land surveyors, but I believe it is a land surveyor’s professional duty to ensure that they truly understand what they are doing while operating any new technologies relating to the work that we do.

Years ago, if a party chief were operating a steel chain and was not performing the appropriate calculations to correct for temperature, elasticity, or tensioning, you better believe he would hear about if from his boss and possibly be fired. The potential for disaster with these technologies today is 100 times that.

While these new technologies and accessories have become amazing tools for us to use, they are not intended to replace a surveyor’s greatest asset: his or her mind. It is important that we take our work very seriously, practice only what we know, and continue to reflect our profession in a positive manner to the public that we serve.