Above: A hypothetical Hangar mission plan for a city.

As the UAV industry continues to grow rapidly, many companies are wondering whether they should own and operate their own UAV and, if they decide to purchase one, how they can connect to paying projects. Hangar Technologies is bridging that gap with a software platform that connects UAV operators with companies that need their services, and it generates plans for autonomous flights and processes the collected imagery.

Hangar was formed about three years ago when several enterprise software entrepreneurs, including Autoflight Logic (that created the Autopilot app to autonomously control DJI UAVs), the UAV solutions company Cloud9Drones, and the Austin-based 3D Robotics sales and marketing team coalesced around a vision: to use the Autopilot app to create a structured spatial-data supply chain through autonomous flight planning.

The new company raised venture capital from LUX and Fontintalis to build the platform.

It feeds the data collected by off-the-shelf UAVs into different image-processing analytics engines, then makes the results accessible to users via a web interface. “That initial product was under development for a good amount of time and launched officially in 2018 with the Hangar app and several other elements of the platform released at the same time,” says Jacob Rachniowski, Hangar’s director of enterprise solutions.

Hangar sees itself as a business-to-business infrastructure as a service, analogous to Amazon Web Services.

“We provide dynamic sensing and motions capabilities in the same way that the cloud provides elastic computing and storage capacity,” explains Joshua Meler, the company’s senior director of marketing. “If a customer requires a specialized pilot network, an atypical sensor, a preferred data transformer, or a third-party viewer, we can integrate those components.”

Hangar’s goal, says Rachniowski, is to be a software company and sell enterprise software subscriptions through its platform while integrating different UAV service providers across the country to build the data-capture element.

Companies that have their own in-house UAV program can use the software to find clients, while those who don’t can use it to connect with pilots in the United States. (This connectivity is a similar model to Germany’s FairFleet, profiled in the “Rent a Drone” article in xyHt’s April issue.)

“People are ultimately buying insights extracted from the data that we collect autonomously,” says Rachniowski.

For example, Hangar can generate an autonomous mission plan for each of a construction company’s multiple projects to repeatedly collect 360-degree images, ortho images, image series, and other data types and deliver them to the client through a web interface.

“Ultimately, customers are coming to us to subscribe to the data supply chain and how it delivers insights in the web portal,” says Rachniowski.

“All of the business flows through us,” Rachniowski explains. “We are building a platform that is powered by a partner eco-system. The customer comes to us for an end-to-end solution, then we plug in the required partners to fulfill the end requirement.”

Hangar partners with UAV service providers by integrating its software with theirs and training their pilots to use its application. Additionally, it also has partnerships with UAV technology companies and with image-processing companies and others to build its end-to-end, autonomous solution. 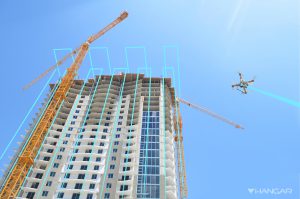 Hangar mission plans for monitoring construction and inspecting a bridge. 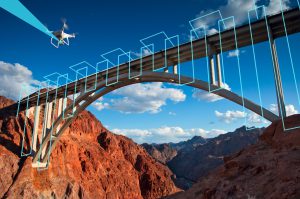 Until recently, large-scale, repeated structured spatial data has depended on the refresh rate of satellite imagery at a sufficiently high resolution for a given project. Now, UAVs can collect that data by repeatedly and accurately flying the same path in a 3D space. “4D visual insight,” Hangar’s marketing phrase for repeated collection of 3D spatial data, enables users to identify changes and patterns.

The workflow, from request to delivery of data, follows a clearly defined set of steps. It starts with users setting up a “Hangar World” account that they use, through a web-based interface, both to request data collections on specific assets at a specified frequency and to store their data. Whenever a collection is requested, Hangar analyzes the relevant airspace to assure that it can be flown legally and safely and to preview any other planning issues.

Next, it generates an autonomous flight plan for the project or asset in question. “That lives within our system as a digital asset for the lifetime of that project or asset, and that is the repeatable flight plan that then gets dispatched up to whoever is going to be flying the mission,” Rachniowski explains.

The autonomous flight plan is then moved into the mobile app, which pilots use to receive their missions and know where to go. They then click “start” and monitor the UAV for safety as it takes off and begins to capture the pre-defined dataset for that project.

The user can swap batteries and the UAV will resume autonomously where it left off, or a different pilot could come on site and finish the mission, Rachniowski points out.

“Autopilot is tracking all this and, as it is flying, it is writing metadata into all the imagery, which allows us to then manage the data effectively and autonomously, afterward.”

After the capture stage, the software can ingest the data back up into the cloud, sort it, organize it, and begin to process it.

“We allow a certain amount of data to be uploaded straight from the UAV to the mobile device up to the cloud,” says Rachniowski. “For larger data sets, we request pilots to upload through an online portal. There is no sorting required, which is a big issue in data management as UAV operations scale. We take care of all that. Someone just takes their SD card, uploads it, and we auto-sort the data.”

At the back end, Hangar’s platform processes the images—for example, stitching them into 360-degree photos, creating orthomosaics or digital elevation models, tiling them for viewing on the web, or generating point clouds and 3D meshes.

“We have all these various analytic tools that we can plug in,” says Rachniowski. “That happens autonomously, based off the requested mission plan at the beginning of the process.”

In the final step, the platform delivers the requested insights to the user via the same map they used to place their requests. “So, the web-based viewer is just a collaboration tool that allows one to view large datasets online easily and quickly and also make annotations on that measurement to extract the insights they are looking for.” 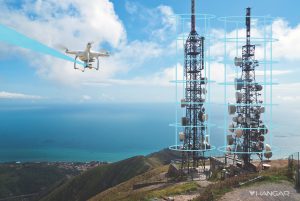 A Hangar mission plan for towers.

Currently, much of Hangar’s work is in monitoring progress at construction sites, especially for the largest general contractors. “We are monitoring capital investments and the construction behind it,” says Rachniowski.

Hangar also participates in the pre-construction and development of some projects, then monitors assets for operations and maintenance.

Hangar has also worked with public safety agencies for disaster relief and with insurance companies for post-disaster documentation. For example, in the Carr Fire in California it worked with the City of Redding post-event, says Robert Hull, the company’s platform enablement content developer.

“The fire wiped out a large portion of that town. The public safety individuals there, with County Fire, were able to go in with our application and quickly receive situational awareness, through 360 imagery. Prior to this, it was boots on the ground and you had to be there with your body to determine whether that was a safe place to be.”

Rachiniowski sees the monitoring of aging infrastructure as an opportunity for expansion. “When we are monitoring assets, we need to fly a lot closer to them to provide very good imagery so that we can then extract other insights such as where there are issues with rust or doing inventory analysis or creating digital twins of the existing infrastructure and feeding that into various analytic solutions.”

In addition to telecom companies, he sees a lot of potential in the energy sector and in public infrastructure, such as roads, bridges, and dams. BVLOS and Full Autonomy In the future, as Federal Aviation Administration regulations evolve, beyond visual line of sight (BVLOS) flights will be relevant to Hangar.

Ultimately, he predicts, Hangar will supply UAVs at the edge, to take care of the tasks near them. Meanwhile, Hangar hopes that the rising economic value of UAVs will influence the FAA to reduce its restrictions on at least some types of BVLOS, such as in smaller areas or for monitoring pipelines or transmission lines.

Within about five years, Hangar foresees, UAVs will execute geospatial missions fully autonomously, with no need for a pilot. For example, they might take off from a rooftop, fly a mission, then return to their rooftop base to download their data and swap batteries, controlled solely by software and commands from a remote control center.

“We are designing our entire platform to not require humans in the loop. However, for regulatory reasons, we can’t push that boundary right now,” says Rachniowski. “We are discussing these topics and building strategic relationships with partners today, while building our platform with that future in mind. It is technically already feasible.”

Additionally, Hangar is now conducting research and development on the use of artificial intelligence and machine learning algorithms to analyze the datasets collected autonomously by UAVs.