The inspiring and touching memoir of a pioneering mathematician, Dr. Gladys B. West, who has been recognized and honored for her key contributions to the development of GPS.

Recently published, “It Began with a Dream” chronicles an extraordinary life and is a celebration of perseverance, hard work, faith, and family. Authored by Gladys B. West and D.H. Jackson, the engaging narrative voice makes for a pleasant read. But it is also punctuated—on nearly every page—with life observations that could each be a frameable inspirational quote.

The reader learns, through the dreams, ambitions, triumphs, and tragedies in the life of Gladys Mae Brown, about a young girl in rural Virginia that saw education as the key to opening a whole new world beyond the farm. It took a lifetime of hard work and continual personal and professional growth and achieve her dreams, but also the support and mentorship of many extraordinary people in her life. 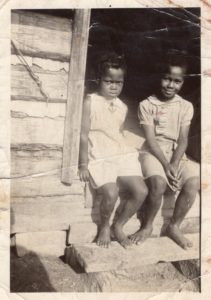 West and her sister on the farm in Sutherland, Virginia

West dedicates her book to the “strong women in my life, who said I could do it”. These included Dr E. Louise Hunter, who along with her husband Dr. John Hunter were an early  power couple in a growing community of black scientists and educators. So many more strong women have figured in her life—friends, family, and colleagues. But more so than others, an amazing woman named Ma Macy Brown, her mother. The heart and soul of a loving family with a hard-working father and supportive siblings, Ma Macy inspired by example, and gave sage advice—all with unrelenting encouragement and love. West considers what accomplishments these many figures like Ma Macy and others in her life might have achieved if they had the same opportunities forged through education. But those were difficult times, what she calls the “separate but unequal” era.

West does not sugarcoat the terrible inequities of the era of her youth, many of these difficulties extended throughout her life and career. Yet, she does not dwell on the negatives and specifics, but instead weaves elements of history into her own story to show the changes, however small and hard won, to society and race relations. Quoting Maya Angelou: “The more you know of your history, the more liberated you become,” West has presented a very personal account of living history, not just in terms of her own career, but of the black women of her generation. 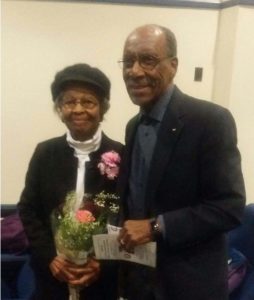 Ira and Gladys at a recognition event in their honor at the Naval Surface Warfare Center, Dahlgren Virginia

The book is also about Ira West, her husband of over six decades, whom she met at the Naval Proving Ground in Dahlgren Virginia, the remote military research facility where they both worked as mathematicians. She feels that it was the hand of God that saw her come to Dahlgren—and to meet Ira. Both Wests worked on naval technologies, Ira in submarine missile systems and Gladys on ballistics and later space-based geodesy (that would become essential to GPS). Ira was also a pioneer in his career, and once passed up an offer to become a professional baseball player to continue in mathematics. Gladys characterizes some of the challenges she has faced in her career as being from having “two strikes against her”—being a woman and black in the mid-20th Century. With a nod to baseball, Ira advised “you need to be a two-strike hitter”.  And Gladys proved over and over, through professional and personal triumphs and challenges, that she certainly is.

The book does not go often into the specifics of her work, but where she does it is in a manner that would be easy to understand for any reader, whether they are a user of high precision GPS or not, or have never heard the term “geodesy” before. It should be noted that West worked with one of the world’s first “super-computers,” but it took real mathematicians like her to make sure it worked right! West noted that while she was doing the foundational work for the global positioning system—that the world would so profoundly benefit from and rely on—she was unaware of just how important her work would become. Her dedication to doing the job at hand, and getting it right, is a key takeaway from her story, and is a testament to many unsung heroes in history. Ever humble, West though did add one particularly pleasing vignette, about a major problem she solved that had baffled many scientists on the project. Bravo!

As her career progressed, so did her responsibilities. Raising a family, serving on the board of a credit union, sorority activities, and many more—she continually sought self-improvement. This included skill building in karate, music, and, despite some health challenges, completing her doctorate! The joy West describes in discovering the great impacts of her work is wonderful. There have been many accolades, awards, and widespread recognition since the world discovered her hidden-until-recently accomplishments. But why did it take so long for the world to discover it was Dr. West’s work? Of course, much of her work for the Navy was quite secretive, but also it took history a lot longer than it should have to recognize the work of women and other Black people who made such great contributions. 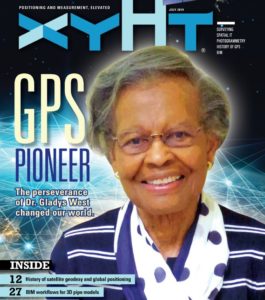 Many years ago, I remember seeing the name Gladys West on some scientific papers (geodesy)—notable, as at the time it was not common to see women cited in such circles. It was not until 2018, in seeing this GPS pioneer listed in the BBC’s “100 Women” profiles that I made the connection. I had the pleasure and honor of interviewing Dr. West for the xyHt Magazine July 2019 Cover story. The surveying profession has embraced Dr. West as a true hidden hero, with and award from the National Society of Professional Surveyors, and she has been named as an honorary surveyor by the surveying association of her home state of Virginia. Recognition includes induction into the Space and Missiles Pioneers Hall of Fame of the United States Air Force—and so many more (read the book).

Recently, there has been a societal awakening, where not only is there more interest in marginalized pioneers like Dr. West, but also on a much broader scale. Many people are seeking to better understand and confront the legacies that have shaped society—with renewed hope for equity and opportunities for all. Facing the past is not without discomfort, but this needs to happen. This book is very timely, and a great read with such an awakening in mind. 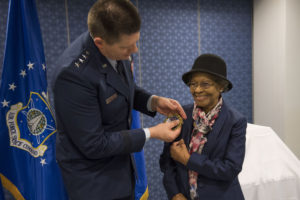 Dr. West’s induction into into the Space and Missiles Pioneers Hall of Fame of the United States Air Force

Dr. West forged her own opportunities, in an era where Jim Crow was still very much alive in her community. It took open minded people to help her fulfill her dreams, like Ralph Niemann, who hired her at Dahlgren and who she says believed that “recruiting women and other minorities into the workforce would bring in people with very strong skills who may have been overlooked elsewhere”. And what a choice he made; the farm girl who dreamed of having the letters Ph.D. added to her name, and with Ma Macy’s traits of never doing anything in half measures.

Thank you, Dr. West, you have enabled us to know exactly where we are—literally, via GPS. But also, by sharing where you have been, you show us where we have been as a society, where we should strive to be, and where we might be able to go moving forward.

It Began with a Dream

By Dr. Gladys B. West and M.H Jackson