Above: The metrology viewed as a combined model.

This article almost didn’t happen. I first met with ADUS DeepOcean in January 2017, when we discussed how they had captured high-resolution laser data deep in the ocean off Ghana. Today, four months later, I am sitting in the National Oceanographic Centre in Southampton, UK, while the world’s largest offshore business conference thunders beneath my feet. Trying to nail these guys down has been tough; they are busy and it isn’t hard to see why.

With a reputation for capturing amazingly detailed, high-resolution surveys of manmade structures, shipwrecks, wind turbines, and oil rigs, Among the catalogue of features this company has captured, DeepOcean claim that they can undertake subsea surveys at any depth. This was certainly put to the test with a job they were asked to do in October 2016, which required ultra-high resolution survey data captured at 1500m below the sea. 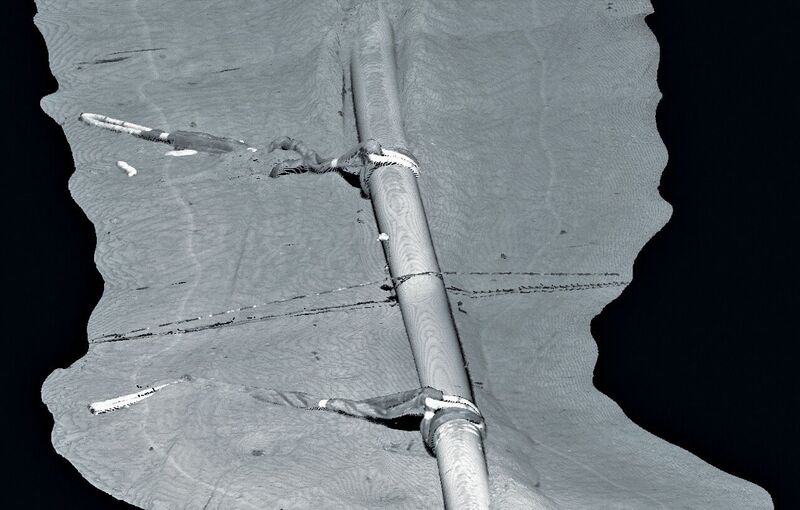 One of the pipelines captured using the system.

As I learned from Stuart Leather, director of business development, the project required the acquisition of high-resolution survey data of 12 drill center locations and a total of 27 metrologies, in water depths between 800m and 1800m (1/2 mile to 1 mile).

It also required capturing data to monitor and analyse the asset conditions at high-accuracy for comparison against the pre-installation metrologies, to check for pipeline end termination (PLET) movement. Working at this depth, to this level of accuracy, would set a new benchmark in subsea survey.

Considering the depth at which the survey was undertaken, I’m amazed that position was close to 1cm.

The challenge was to survey the subsea sea assets with enough detail and to the required accuracy to be able to take measurements for engineering purposes and to assess movement of structures. Laser scanning was the obvious solution. The ability to acquire 40,000 points­—in a single swathe 5m long and 2mm wide—to create a dense metrical point cloud to milli-metric precision makes laser scanning a difficult technology to beat for this application.

Once the technology was chosen, the next decision was how to deploy it. There were two options: either to carry out static laser scans from a tripod on the seabed or to carry out dynamic laser scanning from a remotely operated vehicle (ROV). There are several lasers on the market capable of carrying out the work, but in this case a laser from 2G Robotics was selected. 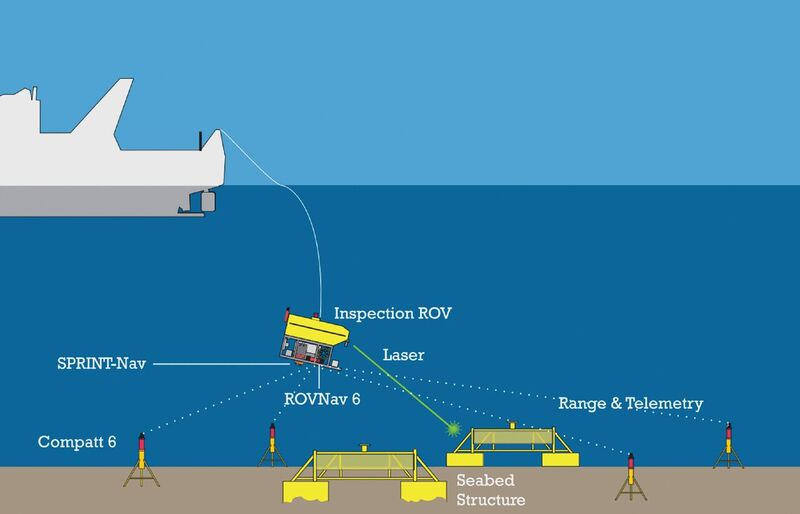 How the ROV works with the equipment. Credit: Sonardyne.

Static scanning would require multiple repositioning of the scanner on the seabed to form a closed loop. This would have taken a great deal of time, and the height above the seabed to which structures could have been imaged would have been limited by the overall height of the survey rig. This height factor was quite significant as the joining pipes (spools) between structures were vertically extended up to 10m above the seabed.

The dynamic approach seemed obvious, but the technology available to position the laser on the ROV to the required accuracy was still being developed. The question: Was it ready and proven? What was required was centimetric positioning of the laser data from a moving platform. Two companies were in the race to provide the technology, and Sonardyne was able to provide the positioning technology within the project timeframe.

Adus DeepOcean was able to combine and integrate the laser positioning and ROV to create the optimum laser data acquisition solution.

The ULS 500 Pro Laser has a depth rating of 4000m and sample rate of up to 61440 points/sec, with the laser mounted in a partially forward, angled arrangement to optimize coverage of structures.

The Sonardyne SPRINT INS is now in its third iteration and almost half the size of the original. It provides an AHRS (Attitude Heading Reference System) and an AAINS (Acoustically Aided Inertial Navigation System) to 6000m, making it more than suitable for the job.

All of this provides the ROV with the operational efficiency of a wide-area mobile mapper and the precision of a static system. 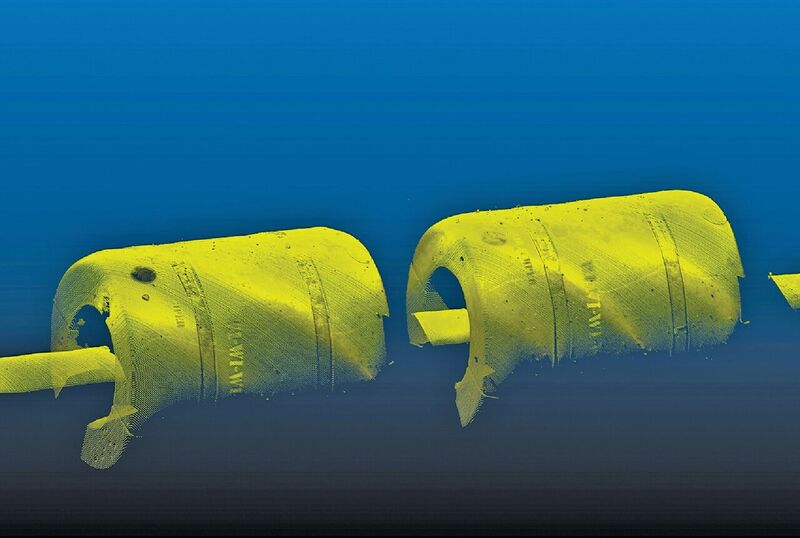 Compatt 6 transponders were deployed on the seabed around the survey area with their approximate relative positions to each other, reliably and time-efficiently determined by DVL/INS dead reckoning. The vehicle then carried out the required survey of the structure, while the INS, DVL, LBL ranges, depth, and sound velocity were gathered by the SPRINT and Fusion software. The process does not require transponder-transponder acoustic line of sight but can use these acoustic baseline measurements when available.

Metrology measurements were executed with four passes and specific geometry to isolate errors.

The tolerances required by the client were:

The good news is that the system outperformed expectations; in fact it was ground-breaking. Considering the depth at which the survey was undertaken, I’m amazed that position was close to 1cm (vertical and horizontal baseline RMS). 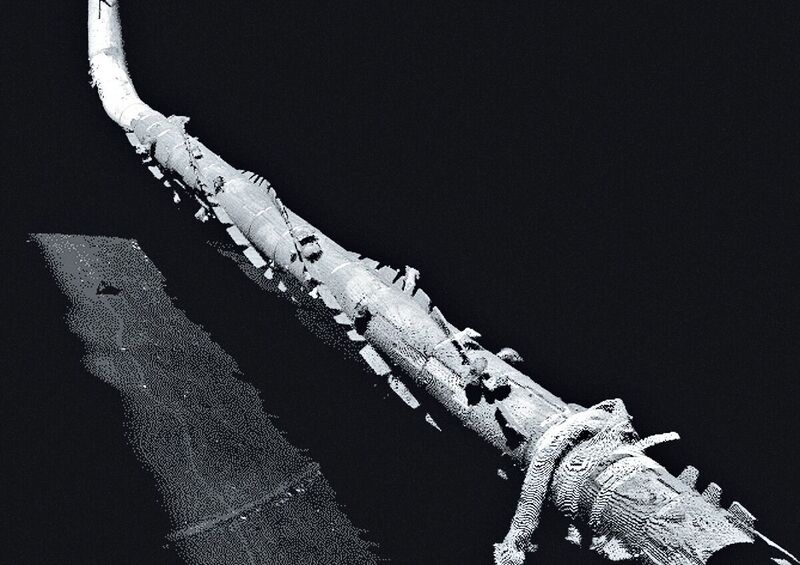 This pipeline image shows the quality of the captured data.

The point clouds were used to derive precise measurements of the structures by reverse engineering into primitive models and then into engineering-analysis software, without metrics on the precision and accuracy of the survey and metrology measurements.

Once the data was downloaded, it was easy to work with as it was already injected with geospatial information; all coordinates were relative to a real-world coordinate system (WGS 1984 UTM 30N). This means that the data is ready to use out of the box by not only the engineers but also the geospatial teams.

I put DeepOcean to the test when I went to their offices to look at this data. Sure enough, I opened ArcGIS Pro and imported the 3D point cloud for one of the PLETs, and it came in like a dream, exactly where I expected it to be.

Also, thanks to the new slpk format Esri has developed, I found that I could whizz around this data and measure, identify, and get real-world coordinates. I’ve used laserscan data from onshore surveys that aren’t this good; this is a testament to how good the equipment is and how well the survey was performed.

It is quite common for the data to just get put on a disk and get stored, ready to be compared alongside the next survey, but DeepOcean has made it usable all along the chain. I can see great value in being able to capture this level of detail in a geospatial format so that it can be viewed over time using the timeline functions in some of the online geospatial Web viewer software.

This would give power to the clients to find issues rapidly without the need for complex modeling, and the application would be not only for metrology but right across the subsea asset chain as well, anywhere offshore that requires constant monitoring.

DeepOcean are keeping quiet over what they’ve got coming up. If it is anything like this, the world will be watching. And I can guarantee, xyHt will have the scoop!