Modern hikers map the Exodus Trail of the Yavapai-Apache Nation with GPS.

In 1875, both the Yavapai and the Apache people were removed from their Rio Verde reservation in Arizona and force-marched by U.S. soldiers in terrible conditions, nearly 200 miles, to the barren desert of San Carlos. 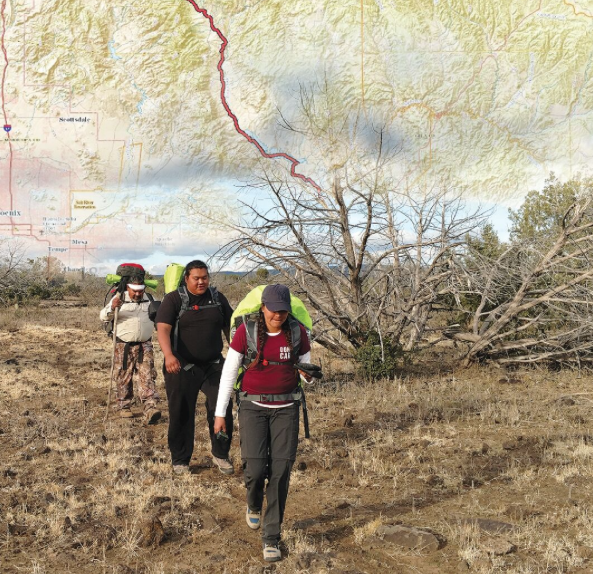 Members of the Yavapai-Apache Nation hiked 193 miles to document the original Exodus.

The route was roughly documented by the officer in charge and an attending doctor known by the Yavapai and Apache elders at the time, but the actual trail has never been tracked or properly mapped. Therefore, the Yavapai-Apache Nation invited the cartographers of CompassData to map our route with tribal members, both youth and elders, to provide a GIS line as close to the original Exodus as possible.

In the future, new excursions can be made with GPS data downloaded to a smartphone or navigation device. Our youth can experience the hardships encountered by their ancestors and appreciate their courage and persistence in returning home after 25 years.

The team walked for 17 days and nights.

The value of our experience cannot be told. You can see the map and read the story, but you will be left with only an impression of the meaning. Our 2016 walk from the Verde Valley to San Carlos was not a reenactment of Exodus. It could not be.

It was, however, a chance to re-visit that event and re-establish its relevance in the present day.

Using GIS mapping technology to document the trip fit with the objectives of the Yavapai-Apache preservation and technology program. The core group who hiked the majority of the way was headed by Judie Piner, administrator of the program, and comprised of Jordan Lewis, Nancy Ruiz, Katherine Marquez and Fred Sanchez. Everett Phillips joined the team to bring CompassData’s mapping expertise to the project.

We walked the trail and recorded a GPS location every 16 feet with a Trimble GeoX7000 Zephyr Model 2. Along the trail were meeting points where we downloaded data and recharged batteries. Judie Piner helped manage the daily meetings. 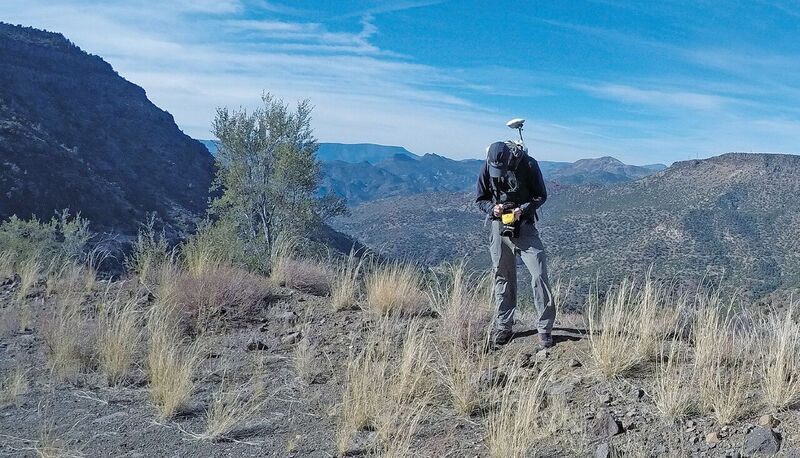 In the end, what CompassData collected on the journey was a line composed of thousands of points.

In some sections we are confident that our group followed the steps of the original Exodus. In other sections, it is possible we were on the other side of a ridge or across a valley from the true route. At Lake Roosevelt and where towns and highways lay over the historic route, the landscape was dramatically different from what it was in 1875. Along the way, we asked ourselves over and over again: If our line is not perfectly accurate to the historical path, then what does it represent? And of what good is it? The answer is that this line is valuable because it is objective. 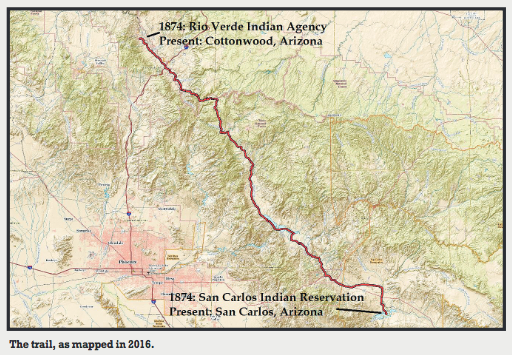 The Exodus is not a myth, an over-simplification, or an argument. The line marks exactly where our team was in space and time as we walked over the earth tracing Exodus. The experiences we had along the way are the ends of a chain of cause and effect that passes through that ancestral event to us.

Within the data points, we contended with the physical world of desert and mountains and the spiritual world of ghosts and spirits that, in turn, terrorized and uplifted us.

The line is important to help bridge the growing cultural gap between the youngest generation of Yavapai-Apache and the generation that currently leads the nation who were raised by people who knew the old ways to live off the land.

With a handheld GPS unit (or a smartphone), future generations may reach the same places we traveled and find traces and echoes of the past. Exodus is a significant event for the Yavapai-Apache. We are glad that our line is a point of departure for those who wish to gain understanding.

The project was founded by the Yavapai-Apache Nation Cultural Resource Center and was orchestrated by the Preservation & Technology group. It was accomplished by grants from the National Park Service and the Institute of Library and Museum Services.

The Yavapai-Apache Cultural Resource Center invites all to come and explore the history and culture of the Yavapai and the Apache. We offer interactive maps, traditional foods, Indian place names, springs, waterways, clan locations, band locations, history, as well as our new line and description of the trek. 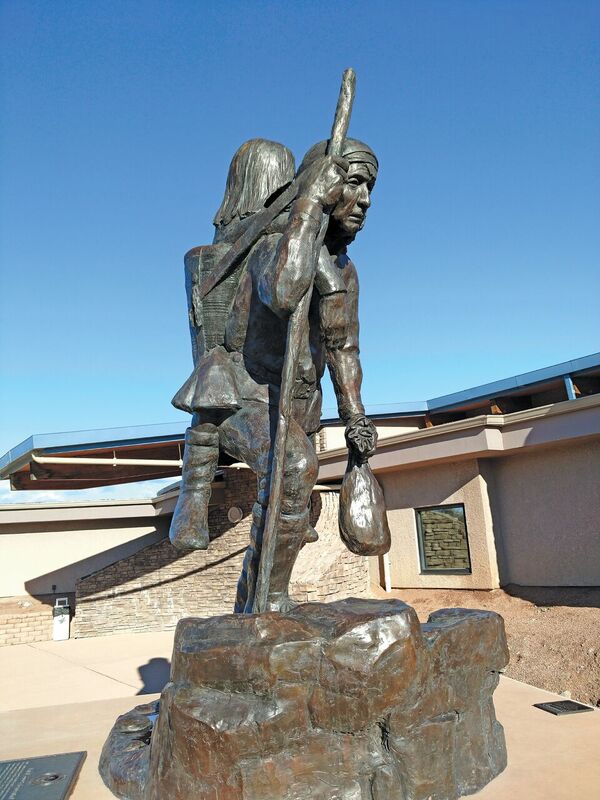 Outside the Yavapai-Apache culture building in Camp Verde, Arizona, is a monument to the people who were forced by the U.S. government to march southwest over the Matazal Mountains in winter, taking with them only what they could carry.

The monument is a larger-than-life bronze statue of an old man carrying his wife in a traditional woven burden basket. She was unable to walk and would have been left to die had he not carried her all the way from the Verde Valley to the San Carlos Agency.

The monument is a testament to the endurance of the Yavapai and Apache who survived the relocation that is known among today’s Yavapai-Apache as Exodus.