Since 2017, the Seabed 2030 initiative has raised awareness about the importance of mapping the entire seafloor to support a healthy and resilient ocean for the well-being of the entire planet. This partnership between the Nippon Foundation, the International Hydrographic Organization (IHO), and the United Nations Educational, Scientific, and Cultural Organization (UNESCO) has made progress, with 23 percent of the ocean now mapped compared to only 6 percent in 2017. But there is a long way to go. 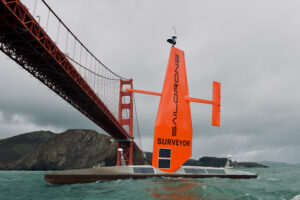 Bon voyage: The Saildrone Surveyor USV takes off from San Francisco on its successful mapping mission between California and Hawaii in 2021. Credit: Saildrone.

At the One Ocean Summit held in February 2022, UNESCO called for increased participation from the 150 member states of UNESCO’s Intergovernmental Oceanographic Commission (IOC) and the private sector to expedite the mapping process. UNESCO’s plan includes dedicating a fleet of 50 traditional marine survey vessels to the effort, consolidating existing marine data in a central database, and expanding the use of sonar on autonomous vehicles. Helping to expand surveying resources are companies like Saildrone, a California-based designer, manufacturer, and operator of uncrewed surface vehicles (USV).

Why map the ocean floor? Because 71 percent of the Earth is covered with water, and the ocean has a direct impact on our climate and on the economic wealth of countries that rely on marine resources. Safety and navigation for transoceanic shipping, defense, and coastal resilience are also factors. Many countries have mapped at least parts of their exclusive economic zones (EEZ), the area of the sea where each has special rights regarding use. However, justifying the expense of mapping the whole ocean continues to be a challenge. 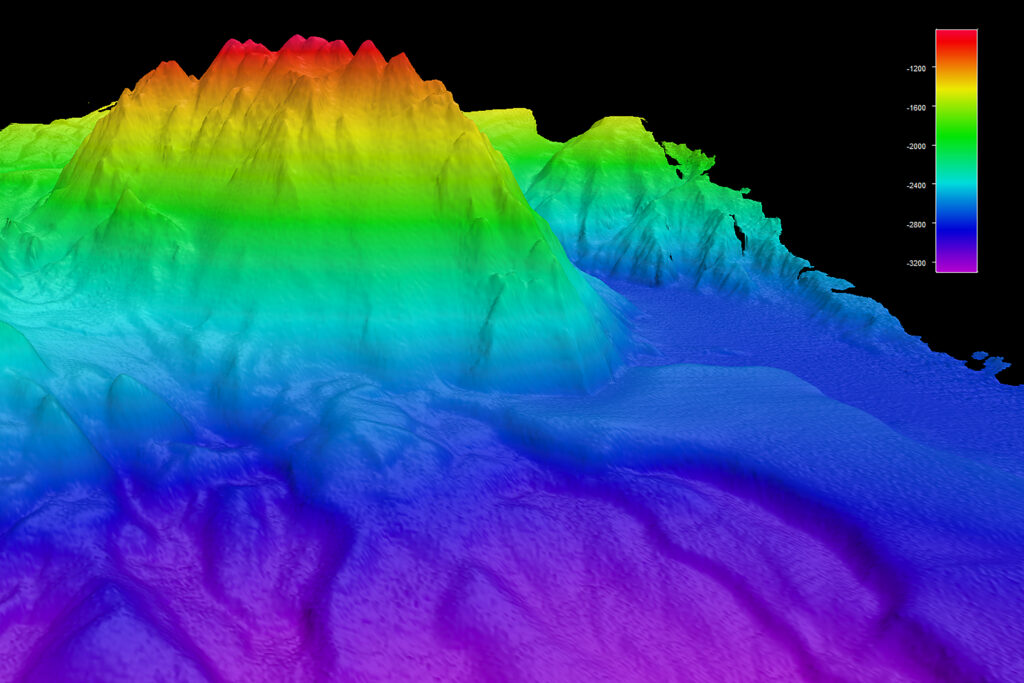 “Funding is a hurdle for any operation, and there aren’t nearly enough manned survey platforms to survey in an aggressive timeline,” says Brian Connon, vice president of ocean mapping at Saildrone. “High-resolution bathymetry is needed to support meteorological modeling and predict the behavior of water during storms, especially in coastal areas to prepare the coastal communities and help prevent losses.”

Also, without mapping first, no one knows what valuable resources might be impacted by activities such as deep-sea mining, offshore aquaculture, offshore wind farms, commercial fishing, etc. A thorough understanding of existing marine habitats will allow experts to identify, manage, and protect those resources and minimize damage.

“Our company is focused on low-carbon sustainable solutions that provide baseline information to use for monitoring the ocean and all the natural and human activities that take place there,” says Connon. “Our successful autonomous ocean crossing between California and Hawaii in 2021 proved the feasibility of our technology for long-endurance missions.” 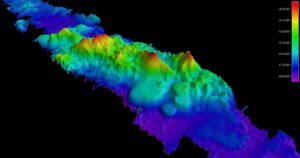 The topography of the ocean floor has far-reaching impacts on climate, transoceanic shipping, and many other marine activities.

In that 28-day voyage, the Saildrone Surveyor covered 2,250 nautical miles and mapped 6,400 square nautical miles of seafloor. The Surveyor sailed along a never-before-mapped route, revealing previously unknown details about the Pacific Ocean seafloor, which will make the area safer for maritime activity. After additional mapping around Oahu, the vehicle returned to San Francisco, mapping another large swath of North Pacific seafloor.

Larry Mayer, director of the University of New Hampshire Center for Coastal and Ocean Mapping, said the data from the mission is “as good as anything we have seen from a ship.”

The Rise of Autonomous Vehicles

Richard Jenkins, founder of Saildrone, broke the land speed record for wind-powered vehicles in 2009 and went on to apply this core technology to wind and solar-powered USV. The largest vehicle, the Saildrone Surveyor, is 22 meters long and is equipped with sonar reaching 7,000 meters deep. In addition to gathering multibeam bathymetry of the ocean floor, other sensors collect data, such as environmental DNA (eDNA) to identify types of animals in water samples and meteorological readings delivered in near real-time to the National Weather Service. The USV is especially useful in remote places or in dangerous conditions, e.g., a hurricane. The company works hand-in-hand with government agencies like NOAA to understand requirements and ensure data meets International Hydrographic Organization (IHO) standards.

While conducting maritime domain awareness (MDA) missions, the USV compiles visual information (acquired by a 360-degree camera system) and Automatic Identification System (AIS) data and applies machine learning to identify boats in the vicinity. If a boat is not broadcasting its location, local authorities are made aware of the potential “dark target” (e.g., illegal fishing, drug trafficking, etc.).

Saildrone handles all manufacturing and operation of the USV, with data being collected according to the specifications of the end users. Due to the unique rigid wing operational characteristics, Saildrone pilots located around the world are continuously monitoring for wind changes. By harnessing the wind to generate power, the USV operates very quietly, which improves the performance of the sonar. There is also a small back-up engine for propulsion, if necessary.

Using the right tool for each situation allows efficient collection of high-quality data. Saildrone has also developed smaller platforms suitable for shallower data collection. The Voyager is a 10-meter vehicle that can map down to 300 meters, and the Explorer is 7 meters long for mapping less than 100 meters deep. Traditional crewed surveying ships fill the need for transporting remote-control underwater vehicles to map areas deeper than 7,000 meters.

Saildrone is expanding operations with four new Surveyor USVs planned for 2022 and 20 more in 2023. The next-generation vehicle will have a larger gas tank, travel at faster speeds, and carry a more advanced sonar with a bigger swath width. An innovative modular design will allow the entire engine to be swapped out with a replacement during servicing to reduce downtime and maximize time on the water.

It will take a coordinated effort on a global scale to achieve the goals of Seabed 2030. Saildrone helps spread the word about the importance of ocean mapping by participating in conferences and symposiums around the world and further supports the industry as a member of the Hydrographic Society of America and the Marine Technology Society.

“Besides being a sustainable low-carbon solution, Surveyor’s operating costs are one-third to one-fourth that of a large research vessel, making the USV an economical alternative to traditional collection methods,” says Connon. “To reach the goal of a comprehensive map of the ocean floor, we need commitment from governments, countries, and philanthropic groups to work together and support this initiative.”