This entry is part 38 of 80 in the series Pangaea


Back in the summer of 2014, I visited Dinosaur Ridge, just west of Denver, Colorado, as part of a demonstration of close-range photogrammetry given by CAE Mining, which uses the technology in its volumetric mine site analysis software.

Dinosaur Ridge has become one of the world’s most famous dinosaur fossil localities thanks to the discovery in 1877 of some of the best-known dinosaurs, including Stegosaurus, Apatosaurus, Diplodocus, and Allosaurus.
The park has an interpretative trail with signs at various trail locations that describe the local geology, including a volcanic ash bed, trace fossils, paleo-ecology, and many other geologic and paleontological features. 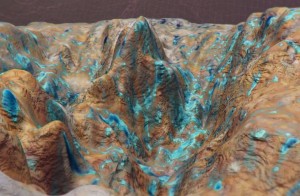 Paleontological analysis of the 3D imagery concluded that the scratches were indeed by a dinosaur approximately 100 million years ago. Footprint data pointed to a species of Theropoda, a carnivorous creature known to populate the area in that long-distant era.

The answer to the last question has given us a window into the behavior of the Therapods. Martin Lockley’s theory is that the scratches were made as part of an individual male Theropod’s mating ritual. To understand this idea, consider that paleontologists believe that dinosaurs are the ancient ancestors of today’s modern birds. Many modern birds, including the Atlantic Puffin, the Australian Brush Turkey, and the Plover, exhibit the same ritualistic scratching, a demonstration to prospective mates of a male bird’s prowess in nest building.

This discovery is a landmark in paleontology, possibly the biggest find in 50 years. It’s notable for the fact that while fossilized dinosaur bones tell us about how dinosaurs died, fossilized dinosaur tracks tell us how they lived. With a big assist from 3D photogrammetry, of course!