Forensic survey technology is now a need rather than a luxury as Latin America’s urban concentration accelerates. 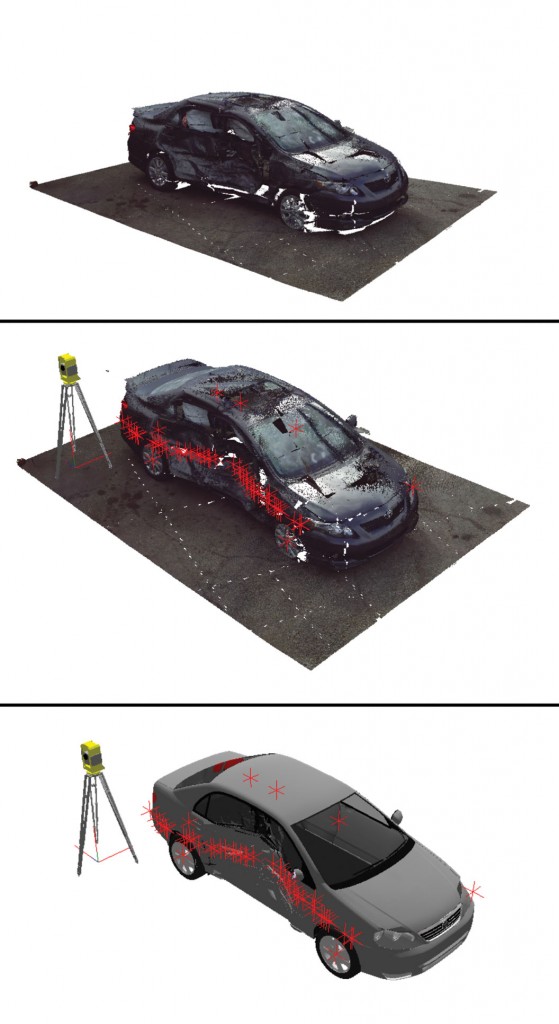 For decades the art and science of determining how a crime was commit-ted and how a car crash occurred has relied on expert hypotheses based on personal experience and memory. Experts have used tape measures, cameras, and paper sketches to create 2D drawings of areas being investigated. These drafts and photos from the scene are the only registry left after an area is cleaned and returned to its normal use.

This approach is sufficient when police departments have two or three automobile accidents per day and perhaps one crime scene to reconstruct every week. However, with today’s urban concentration, proliferation of cars on the streets, and rising crime, resources have reached crisis levels.

Today it takes a crime scene investigator between 6 and 48 hours to completely reconstruct each case site using tape measures, paper sketches, and photographs. The time required for road and highway accidents is slightly less but still ranks at the level of multiple hours.

Here’s where mapping technology comes in. It allows experts and non-experts alike to reconstruct a crime scene more accurately and at a fraction of the time it takes with traditional methods.

Caption: Using photographs of an actual car accident, a 3D digital reconstruction of the damaged vehicle, and the original car manufacturer specifications, forensics software (Visual Statement, in this case) determined the force and direction of the impact by analyzing deformation in the car structure.

For several years now, police departments in the United States and Europe have begun using total stations instead of tape measures for crime-scene and traffic-accident investigations, which accelerates the pace of the site being returned to normal use.

And as surveying technologies advance, so do the applications for forensic reconstruction. In some police stations, robotic total stations are replacing mechanical total stations, and laser scanners and imaging rovers are being used to further reduce time. Specialized software has also appeared in the market.

A typical hand-drawn diagram of a car accident is based on hypothesis, not measurements.

Times to reconstruct crime scenes and accidents have been reduced dramatically. The combination of hardware and software have quickly made the adoption of these techniques no longer a luxury, but a need.

The financial savings is particularly important in the case of busy roads and highways where the time they are closed equals money. Furthermore, investments in these technologies have an ROI of just a few months or a year at the most.

Only a few years of examination has shown that on average, site reconstruction time can be reduced by these percentages: 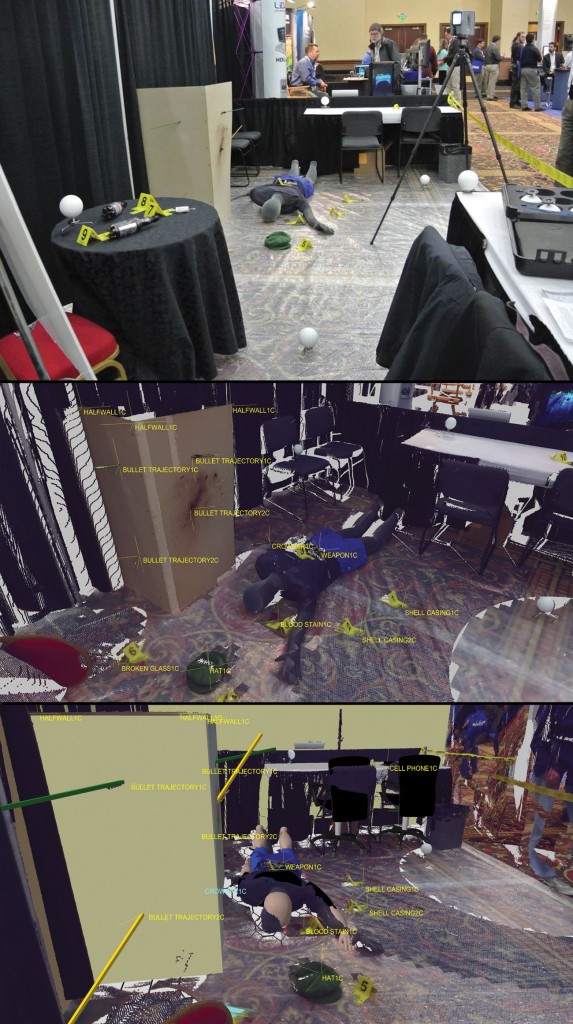 This scene was created at a trade show (in Trimble’s Visual Statement software booth) to demonstrate forensics software and total stations for police officers. Officers were trained on site to collect the data using the total station, download it into the software, and recreate the scene in minutes, including bullet trajectories.

Nearly everywhere in the world, budgeting constraints are increasing, and police departments have been asked to do more with the same budgets
—in some cases with less. Urban concentration has exacerbated the need for police services, and there is a demand for more expeditious rendering of these services.

In 2011 the World Bank published a paper titled “Latin America’s population growth slows but region’s services still insufficient” that said: “Currently, more than 75% of Latin America’s 590 million inhabitants live in cities, a record for the developing world. This trend is global: in 1950, just 730 million people lived in cities; by 2009, the figure had risen to over 3 billion. In the region, Mexico City, Sao Paulo, Rio de Janeiro, and Buenos Aires each have populations of over 10 million. In Argentina, according to the most recent census, 9 of every 10 inhabitants live in cities.”

In Latin America, the disparity between people with access to education is rigidly cemented and growing. This income gap is the perfect storm for increasing levels of crime in all its forms.

In addition, the economic development in the region over the past decade has been tremendous, translating into increasing access to goods such as cars. This is especially true in populations that just a few years ago had no aspirations to such luxuries.

The combination of increasing crime rates and more cars on the streets constitutes a double whammy for police departments. This is reflected in the amount of crime-scene and traffic-accident reconstructions doubling, and sometimes tripling, over the past years.

Yet, technology use in Latin American police departments is a slightly different situation than in the United States given the fact that the level of education required for applicants to enter police forces in the sub-continent, until recently, was very low. Language barriers have also taken a toll on early technology adoption.

The three images on the facing page (bottom, right) are photographs obtained while surveying the booth site from different angles; the three images directly at left are screenshots from the software. They were all created by a police officer visiting the booth.

This is changing, however, due to a younger, more technology-savvy police force in the region as well as the launch of specialized gear by surveying equipment manufacturers. Also, the availability of new software and hardware in local languages with specialized field procedures and requirements allows police departments to quickly catch up with their counterparts in the developed world. 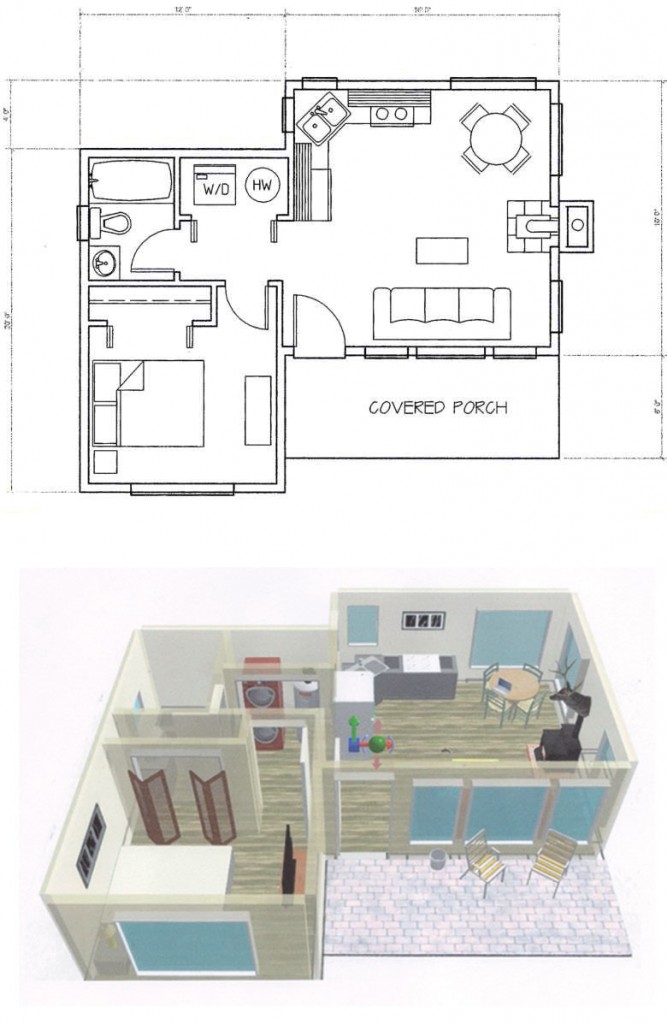 Because of statistics pointing to success in the U.S. and Europe, police departments throughout Latin America are beginning to include investments in these technologies in their annual budgets. They are forcing local and federal governments to seriously look at these expenditures as requirements and not as “nice-to-have,” capricious expenses.

In the specific case of new highways in Latin America, there is a new modality of privatizing construction and operation under the “concession” model. In this model, the construction company is given the rights to charge tolls for using the new road for an extended period. This model allows for a new approach wherein private enterprises can buy surveying equipment and donate it to local police enforcement agencies, as well as training to use the equipment. It guarantees that accidents in the new artery are dealt with swiftly, therefore reducing down time and increasing revenue for the construction companies.

The consensus is that technology adoption in developing countries, specifically Latin America, lags behind the developed world by about five to ten years, depending on the technology. We can safely say that in the case of crime-scene and road-accident reconstruction, police departments throughout the region are increasing their requirements for new recruits in order to have a well-suited force, capable of adopting these new technologies.

On October 14, 2010 at 9:05 pm on a remote road in rural Colombia, two young women driving a small motorcycle were hit from behind by a tractor trailer traveling at 91 km/h (57 mph). 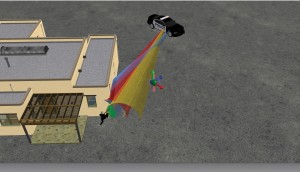 The trajectory of a bullet in the shape of a cone can be modeled with special software.

One of the women died on impact, and the other was sent to a nearby hospital with serious injuries, including a severed spine.

This sad and gruesome accident marked the beginning of a new era in accident reconstruction in Colombia. For the first time, an accident was reconstructed using two methods: 1) the traditional measuring tape and pen and paper and 2) a total station with a camera and crime-reconstruction software. During the actual reconstruction of the accident both teams were in the field at the same time and were able to compare notes afterwards.

The initial assessments by both teams differed considerably from each other in the determination of the truck speed. The pen and paper team calculated the speed of the truck at 56 km/h while the total station team measured the speed at 91 km/h. 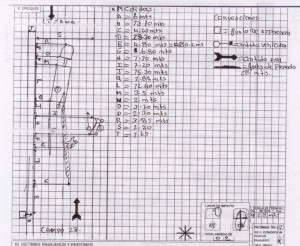 The pen and paper team based their measurements on fixed features of the road.

The basic difference in the two methods is the fact that the survey-savvy total station team used a total station with an integrated camera that allowed them to capture more data in less time than the pen and paper team, data that later proved invaluable in the determination of what happened.

The pen and paper team used the accepted techniques of measuring specific areas of each vehicle and each victim with respect to fixed features of the road, like the sidewalk, and then drawing these measurements in a sketch.

The total station team measured the individual features of the accident and the victim using a series of fixed points that were later tied using a polygon and adjusted for accuracy. The measurements of angles and distances were accompanied with photographs, which later determined that the measurements made by the pen and paper team were wrong. 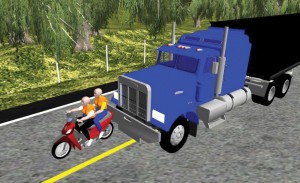 Using crime reconstruction software, the total station team tied the fixed points and adjusted for accuracy, which proved that the pen and paper team’s measurements were wrong.

The photographs and the analysis of the crime reconstruction software proved conclusively that the speed was indeed 91 km/h and that the driver of the 18-wheeler was negligent by driving at that speed in pitch-dark conditions. He was later charged with negligent homicide.

Given the results of the new technology in comparison with the old techniques in this case, it was recommended that total stations and crime reconstruction software be lawfully admitted in court, which previously had not been possible. Only 2D paper sketches are admitted as evidence in Colombian courts. But in the near future, photo-equipped totals stations and laser scanners will likely be admitted routinely. 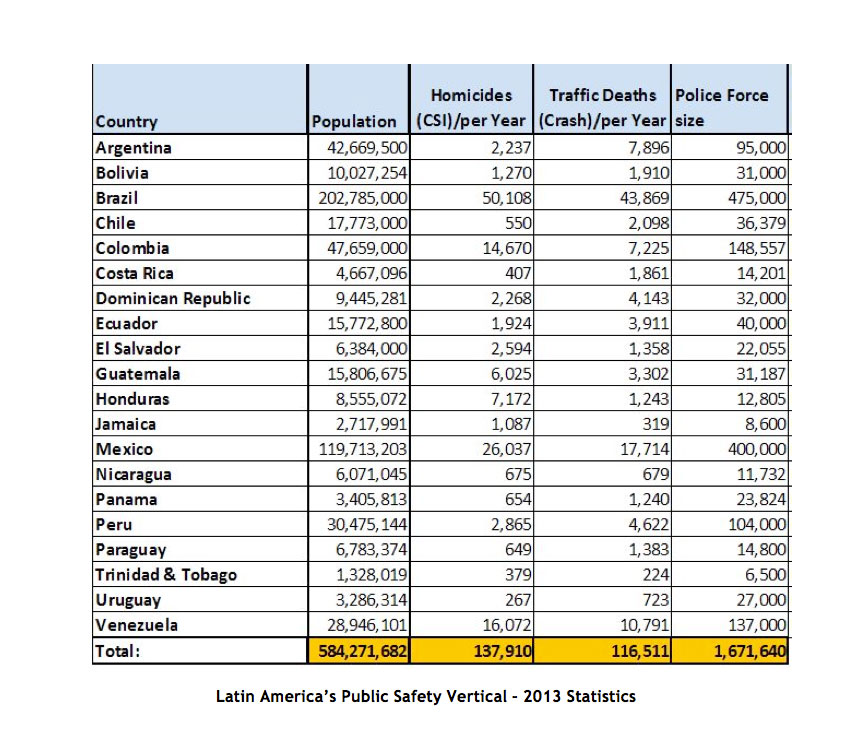