With the Trimble X7, there’s no going back (for calibration).

About a month before INTERGEO 2019, I started to hear rumblings about a new device from Trimble. Some said it was a laser scanner, some a new total station, but no one was ready for what was leaked the day before the official release day.

It Started on LinkedIn

I was packing my suitcase for INTERGEO when I spotted a conversation on LinkedIn in which someone had asked what “auto calibration” was with regard to the X7. The response was that “it never needed calibrating.”

Now, those of you who read this magazine regularly will know that I am a mere surveying Padawan and not a chartered surveyor (yet), so I had to clarify with a friend who has been surveying for a couple of decades what this meant. He said that it meant that it calibrated itself—no need for the annual calibration. He then asked what this was in reference to, and I made an excuse about something someone was debating and ran off.

On the day of the release when official information came through, sure enough top of the list is the “Automatic Calibration” along with a little note that says “No targets or user interaction required.”

Wow. I’ve been writing for xyHt for over four years, and that one line blew me away! I then read further that it has automatic registration and self leveling, both tasks that, as more of a 3D GIS/BIM kinda person, I find to be a pain—so I usually get a surveyor to come along just to ensure I don’t overlook something when I’m performing them. 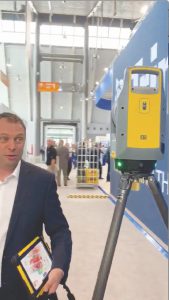 Getting to the Truth

Two days after the press release, I find myself standing in front of the device itself, a brand new type of laser scanner from Trimble, called the X7. Up close it looks a little smaller than I expected but solid, with a distinctive single handle on one side.

Before there is a chance to discuss anything, I brutally ask the demonstrator, “Is it true: it does automatic calibration?”

The response, without a blink of an eye, was, “Yes. Not only does it not require calibration, but we’ve not even set a date for ever bringing it back in.”

I’m not going to lie—there was an awkward silence for a couple of minutes while I tried to think of another question because I hadn’t expected this to be true.

My demonstrator added, “Not only does it do automatic calibration, but it will also self level within 24 seconds.”

It is safe to say that this is quite innovative. The X7 has some real nice touches, too. It weighs just about 13 pounds and is easy to carry thanks to that distinctive handle on the side.

The device is IP55 protected, which means it will handle being hosed with water, and it comes with a two-year warranty (which probably doesn’t cover you for deliberately hosing your device).

The stated range of the scanner is 80m (about 87 yards) with a 3D point accuracy at 20m of 3.5mm. When you consider that the TX-series is double the weight and achieves 3mm, the only real difference is the range, and with most of the work I do, 80m is more than enough.

A main difference between the X7 and the TX-series is that the X7 has three 10MP cameras, making for a better colored point cloud. There is also a high sensitivity mode that helps overcome some of the difficulty where you’ve got reflective or non-scanner-friendly environments. 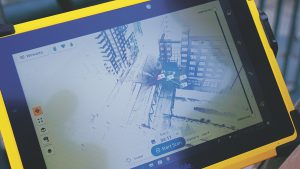 The X7 comes bundled with Trimble Perspectives (3D software) and a nice shiny Windows T10 tablet, which allows you to view the data in 2D and 3D swiftly and easily. But what I really like is the ability to annotate and measure the cloud directly before uploading or moving the data anywhere.

I have to be honest, I am excited about a device like this. As a hobbyist/modeler/BIMer, for me this takes all the complexity out of using the device, and it allows me to not only create great data but also export a registration report directly from the T10 to quantify the accuracy and parameters to the real surveyors so that they can ensure what I did was above board (they never believe me).

There are so many applications that I can see this being used for, due to its small form, self leveling, auto registration, and automatic calibration. The primary case that stands out to me is with the police force, as I recently saw how one team is using handheld SLAM devices for their crime scene and road traffic incident work. With ease of use of the X7 and with less need to be an expert to set up and capture accurate information in detail, it could make a huge difference to how these cases are analyzed.

It is also well suited to on-site construction work because you can put it in a backpack for transport and even climb ladders with it to access elevated platforms. Trimble says, “In-field registration confirms the area has been captured entirely, eliminating costly field rework for critical projects when plants are shut down.

“Back in the office, scans can also be geo-referenced to a plant coordinate system to match perfectly with CAD design models by surveying plant monuments and targets scanned by the X7. RealWorks Target-based registration can use the survey control file to automatically register the scans for export to plant design CAD software.”

Having had my hands on the X7, I have developed a bit of a soft spot for it. For a borderline surveyor there is a lot to like: not only its ease of use, but how it also takes all the complication out of capturing high-quality information for those in the BIM, AEC, gaming, and GIS industries. Plus it makes sure that when the data is passed on to the professionals, all the correct information is relayed over.

This is a real game-changer, and I look forward to seeing how the other manufacturers respond. 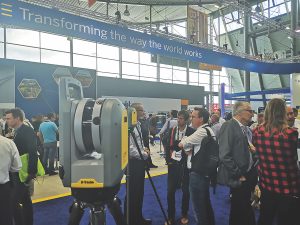