So when are they going to do a reality show about us scanner jockeys?

The ship owner (I’ll call him Bill) flew me up to Alaska specifically for this project and told me not to worry about anything, that he would arrange for my food and boarding. Usually that means I’m put in a nice hotel. When I got there, though, he took me to another boat hooked to a dock and said that’s where I’d be staying. That boat was under construction and had no power. My bathroom was either over the side or up on the shore in the back of a bar. Since it was summer, it didn’t get dark until about 1:00 am, and I had to hang blankets up to try to block out the light so I could get some sleep. This made it very hot in there.

This day started at 4:00 a.m. when Bill pounded on the door of my luxurious boarding accommodations. He was in a foul mood and was saying that someone had stolen his reserved spot, so we needed to pull his boat out of the water. 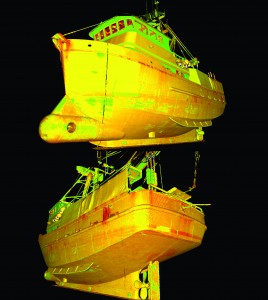 In this 3D point cloud, the colors represent reflectivity. Green and yellow are very reflective surfaces; orange and red are not so reflective.

Bill then motored up and down the Homer Spit looking for an alternative spot until he came across a boat beached on the sand waiting for prop repairs. It turned out to be one of the boats from a popular commercial-fishing reality show. The two ships’ captains were longtime friends, so Bill decided to lean his boat against the beached celebrity and wait for the tide to go out.

My job now was to haul all my gear down to where he had beached his boat, set up my equipment, and scan the boat on all four corners—all while racing the tide and a big storm that was blowing in. We only had one shot at this scan due to the incoming storm and the tight schedule of the captain and crew working on the boat.

My equipment included a scanner that was old even back then, with tripod, laptop, power cable, and a golf bag full of targets, rods, and tripods (yes, technology sure has changed since then). Setting up that scanner required a lengthy boot-up sequence followed by an even lengthier connection and set-up process.

Once on the beach, I got everything connected and begin to scan. Suddenly the wind and rain picked up and blasted against the scanner, putting stress on the motors and shutting it down. This happened every time I would get a scan going. It was agony to have to boot everything back up and wait for the setup process only to have the scanner shut down after a couple minutes of scanning.

The captain and his crew were trying to keep the ship dry by running propane torches over the hull, but everything I did to try to keep the scanner running failed. The tide was coming in, the storm was getting worse, and tourists kept taking pictures of this big famous boat with our little boat snuggled up to it.

I finally came up with the idea of having the crew hold up a large tarp to keep the wind and rain off the scanner. This worked! I was able to scan all four corners and I pulled my tripods right as the tide reached my feet.

So when are they going to do a reality show about us scanner jockeys? 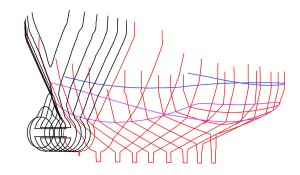 The 3D deliverable for the naval architect: the red lines are the actual interior frames, blue is the deck line, pink is the keel, and black are cross sections every foot to show the shape. The architect will use this drawing to design with, and because he has exact dimensions he will be able to save tens of thousands of dollars in steel alone by ordering sections to be pre-cut (as opposed to cutting on site and creating waste).