Changing a national geodetic datum (a set of reference points used to locate places on the Earth), either horizontal or vertical, is a major enterprise. The technical and societal considerations can be staggering, all the more so for a country as big and diverse as Canada. With the introduction of a new national vertical datum, the Canadian Geodetic Survey (CGS) has set an extremely high standard for the National Geodetic Survey (NGS) to follow in 2022. Ensuring a high degree of integrity between national reference systems has always been a major priority for CGS and NGS and their predecessors for over 100 years.

The article and the next in this series will highlight those collaborative efforts and the impact that these changes will have, not only on the changes in height systems but also on the manner in which they are realized in this age of satellite positioning.

The role of the land surveyor as an expert in measurement is to transform and adjust information from different data sources to one standard datum or reference. Thankfully, changing a datum is not something that happens very often. In Canada, the last time a vertical datum was adopted was in 1935.

Denis Hains, director of the CGS of Natural Resources Canada, expressed that, “spatially enabling Canada is a challenge given the size and the complex geography and topography of this vast country. This is especially true in very remote areas such as the North and the Arctic where the national vertical reference system was not available. CGS’s role is to enable access to the Canadian Spatial Reference System everywhere in Canada, in an affordable manner using up-to-date technologies including space-based geodesy.”

Although the Canadian reality is critical domestically, space-based geodesy is borderless and global in context. Hains stressed the fact that, “adopting a new vertical datum in Canada is not only a question of enabling access to a national standard in an affordable and technologically efficient manner, but also ensuring that this standard is shared with our territorial neighbours and harmonized with global geodetic standards.”

The Canadian Geodetic Vertical Datum of 1928 (CGVD28) was originally defined by mean sea level (MSL) at five tide gauges across Canada: Yarmouth and Halifax on the Atlantic Coast, Pointe-au-Père on the lower St-Lawrence River, and Vancouver and Prince Rupert on the Pacific Coast, as well as the fixed elevation of a bench mark in Rouses Point, New York, agreed to by the U.S. and Canada in 1925.

In 1973, a U.S. federal task force published a report indicating that the national geodetic networks were obsolete and new surveys and a new national adjustment to meet modern demands were needed.   The U.S. NGS followed with a position paper identifying the tasks and effort required to modernize the National Geodetic Vertical Datum of 1929 (NGVD 29).

In early 1982, the U.S. and Canada signed a formal Memorandum of Understanding outlining bilateral cooperation regarding the North 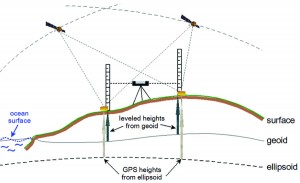 American Vertical Datum of 1988 (NAVD 88) initiative. The NAVD 88 project culminated in the readjustment of the first-order levelling networks for Mexico, Canada, and the U.S. with a single constraint to a tide gauge located in Rimouski, Québec. The U.S. affirmed NAVD 88 as the official vertical datum of the National Spatial Reference System for the Conterminous United States and Alaska in 1993.

Canada did not adopt NAVD 88 and kept CGVD28 as their official datum.

With recent advances of GNSS, the high cost in expanding and maintaining national leveling networks, and the difficulties of accessing the vertical datum in Canada’s north and unpopulated regions, the federal-provincial Canadian Geodetic Reference System Committee (CGRSC) passed a resolution in 2002 recommending a Height Reference System Modernization project for Canada. This initiative called for the implementation of a geoid-based vertical datum by 2010, coinciding with the availability of data from two dedicated satellite gravity missions: GRACE and GOCE.

In March 2012, the U.S. and Canadian geodetic agencies agreed to define, realize, and maintain a common vertical datum between the two countries by 2022 that would be based on a common geoid model. It was further agreed, in April 2012, that this vertical datum would be defined by the equipotential (level) surface 62,636,856.00 m2s-2, representing the coastal mean sea level for North America along Pacific, Atlantic, and Gulf coasts.

On November 28, 2013, Canada announced and made available to the general public the geoid model CGG2013, the first realization of CGVD2013. This vertical datum represents a new era for Canada in the determination of orthometric heights, as it brings several very important changes:

The Canadian Geodetic Vertical Datum of 1928 (CGVD28), which was formally adopted by a federal Order in Council in 1935, will continue to co-exist with CGVD2013. However, use of CGVD28 will gradually diminish as Canada stops maintaining the more than 90,000 first-order bench marks.

Today’s network at the highest level comprises some 250 stations, including the Canadian Active Control System (CACS) and the Canadian Base Network (CBN). Densification is provided by the provincial High Precision Networks (HPN) and Real Time Networks (RTN) from public and private providers.

During the transition period, Canada will publish CGVD2013 heights at the bench marks alongside the old CGVD28 heights. The new heights were calculated from a nationwide adjustment of the leveling network which has been constrained to orthometric heights derived from NAD83(CSRS) ellipsoidal heights (through precise GPS observations) and CGG2013 geoid heights at intervals of approximately 500 km.

The new adjustment does not account for, or correct for, bench mark instability or changes in Earth’s crust dynamic. Thus the heights determined from GNSS and the CGG2013 geoid model prevail over those obtained from the adjustment of the leveling network.

The second part of this column series covers the impacts of this datum change on how height is measured in Canada, conversion tools, transformations needed for U.S. and Canadian surveyors to work on a common vertical datum, and future directions for Canada.