On a cold, frosty day in December, I’m walking around a skating rink in London with what looks like a device stolen from Doctor Who’s TARDIS. With its sleek exterior and ergonomic design, the Leica BLK2GO flips the idea of SLAM devices on its head. 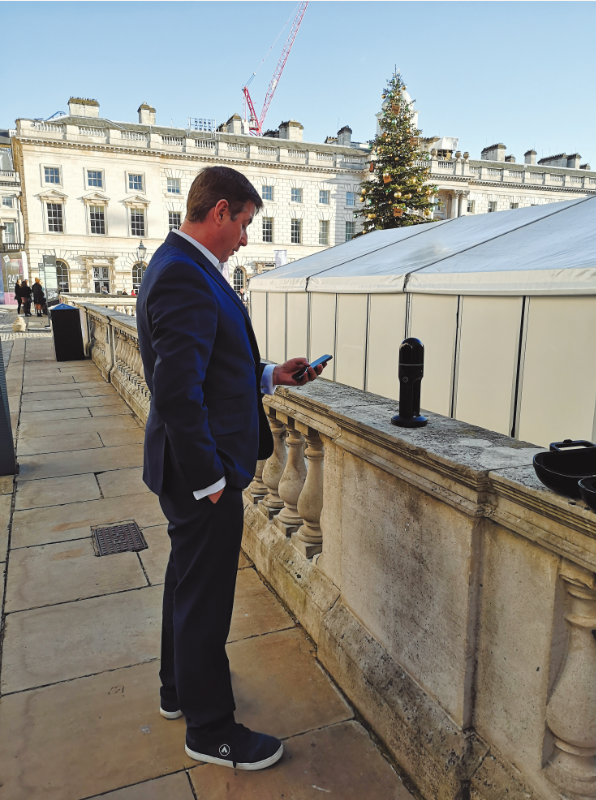 Rather than being purely practical and designed to function at the expense of ergonomics, simple operation, or portability, this has it all—the BLK2GO has been engineered to the nth degree, but it’s also as easy to use as it is a necessity for the job.

In fact, later, as I am sitting discussing the specifications and usability with Hexagon Geosystems’ CTO (interview below), someone at a table across from us asks how much it is and where they can get one … even before they know what it is!

The BLK2GO is a “GRAND- SLAM” device, which means that it uses both visual SLAM and lidar SLAM, capturing 420,000 points per second using one of the world’s smallest dual axis lidar enclosed in the top of the dome. There are three small but powerful panoramic cameras in the aluminium body that are complemented by a 12-megapixel detail camera for high-contrast imagery.

A multicolored light band encircles the device, which indicates the status of the device through a plethora of colors. To top it off, the device is lightweight: it is less than 800g (including battery), which makes it extremely easy to carry for a long time. And the battery lasts approximately 45 minutes on a full charge, so even those of us without super surveyor powers, such as a BIM manager or a GIS consultant, can cope.

Now, the ease of use and consistency are just as important as how many points per second something can pump out, and this is where the BLK2GO thrives. Every small part has been considered and designed to make something that feels like a pleasure in your hand but also is easy to use and gets survey-quality data. 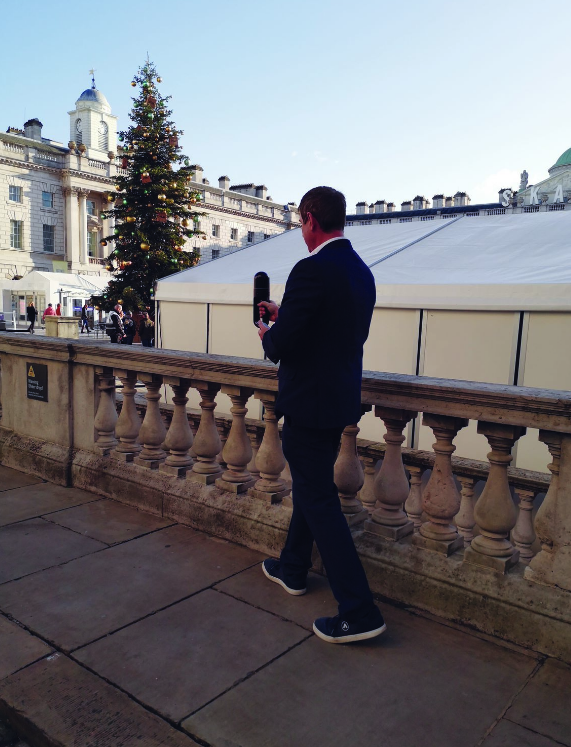 The BLK2GO sits upright in a stand that you place at your start point (remember that this is a SLAM device, so you need to do a complete circuit). You then press the on button, and the LED ring will go orange and then green, indicating that it is ready. If you are using an iPhone (iOS 12.1 or later), you can install the app and view your progress as you walk around and have it show if the connection is lost or problems occur.

Maybe I was lucky, but the device connected the first time and kept a perfect connection. As I walked around, it felt easy to handle and lightweight, no heavier than a good book. And it did draw a lot of curious stares from passers-by.

Within 10 minutes I’d walked around some tricky and complex areas and completed the circuit by returning the device to its stand. The iPhone I borrowed showed that the scan was complete, and it looked like I got good coverage, so I went back to the nice warm meeting area to upload the data.

Uploading the data to the computer can be done via Wi-Fi or USB 3.0, so I moved from plugging in the cable to viewing the data quickly with the BLK software. To be honest, the cloud and colorization was all clean and crisp, edges were well defined, and it was interesting to see that even the lamp post I whizzed past was well formed, something I have had problems with while using other SLAM devices. (There is also the opportunity to view the still images taken by the BLK2GO in the form of a Street View style tour.) Overall, having used other SLAM devices, I can say that this was simple to operate, so I can see the appeal. More to the point, I could see how easy it would be to train up a few novices or non-geospatial people to capture data, though I can see many people wanting to do the scanning themselves.

To get more details, I talked to Hexagon’s Geosystems’ CTO, Burkhard Boeckem. 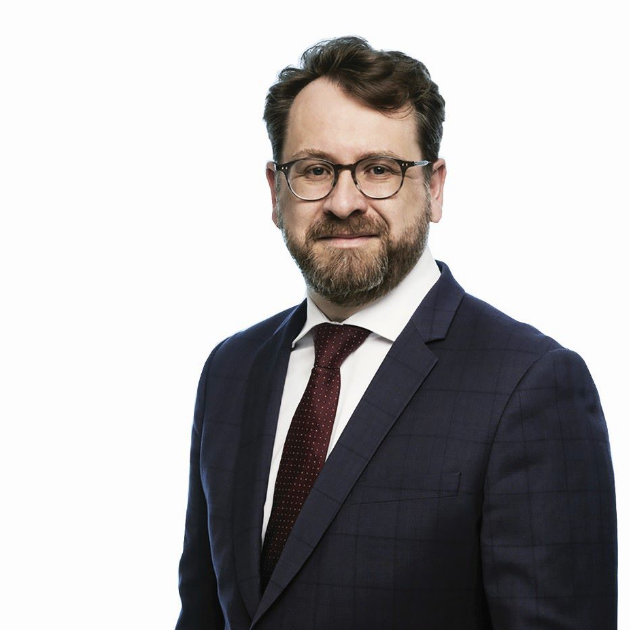 Nick Duggan: Tell me a little about the new device.

Burkhard Boeckem: This is the next evolution of the BLK series. We have made the most out of our high-precision workshop where we can. The body of the BLK2GO is made out of one piece of black anodized aluminum. We wanted a refined and sleek finish and had to specially source one of the finest grinding machines to get the finish we wanted.

The BLK2GO is smaller, lighter, intuitive to use, with its simple one-touch button operation. If you come to our office, in the cafeteria we have a giant button like the one on the front of the BLK with the green light showing to remind everyone that things can be as complex as you like on the inside but simple to use on the outside.

Whereas the BLK360 was about the democratization of scanning, the BLK2GO represents the next step in design as well as development. In this device there is a new lidar design; the 100mm diameter is now 80mm diameter and everything has been scaled.

In order to be free in movement, for example, we had to make the lidar faster: in the BLK360 you do a normal, single 360-degree scan in around three minutes; here you go two full revolutions in a second. The BLK360 does around 30HZ (30 revolutions per second), and this does 100Hz on the fast axis. It is a coaxial design whereby the beam goes out and returns at the same point.

We also spent a lot of time getting the dome right. If you have the BLK2GO close to your face, you don’t want your hair spinning anywhere near it so we ensured that the dome was fully enclosed.

The three cameras operate on a global shutter to be really fast, and one camera is high resolution to tag items; it’s a 12MP design with excellent optics. Under the hood there is everything needed for processing, and all data is processed on the device itself.

We wanted to ensure we had three inertial measurement units in here, so we then compensate these with two SLAM methods, the lidar SLAM (the same as used in the Pegasus backpack) and the visual SLAM using cameras which we mastered in the RTC360. The combination of these SLAMs we call the “GRANDSLAM.” So far we specify that you can get better than 20mm indoors.

You can download a companion app to use with the iPhone that lets you see what you are capturing as you walk around. For this we had to create a new fast point cloud engine called HSPC, or Hexagon Smart Point Cloud, that shows you the point cloud in 2D or 3D and the trajectory in real time.

Using this device, you can scan around 500 square feet in about one minute. Jürgen Dold, the Hexagon Geo- systems’ president, scanned our entire office in around seven minutes.

ND: USB-C for all those Apple fans out there?

BB: Well, they do lead the way in functionality and simplicity, which is what we are aiming for here.

ND: How does it work in low light?

BB: It works perfectly because of lidar SLAM, which compensates in low-light areas that the visual SLAM might have difficulty picking up.

When we tested the BLK2GO, Jürgen and I took five devices each to try them out. He scanned the production area and I scanned the basement, and the basement was really dark. However, we still got really good data. My detail images weren’t as good as Jürgen’s were as he was able to get detailed images, for example, of every worker on the production line. So if you want the additional visual information and were scanning a darker area like a basement, you would probably want some extra lighting. Seven Chocolate Bars

ND: How does this differ from some of the other SLAM devices?

BB: I would say that this is the most integrated solution; that is what the BLK stands for. For operations it is more versatile—we didn’t want any cables. We built our own lidars. Even the parabolic mirror in the BLK2GO is inherited from the RTC360 design and the miniaturized encoders are taking out of our large technology basket.

For this, we had a weight target as part of the project. When we were looking at the design of the device, I put seven 100g chocolate bars on the front desk and said, “This is the maximum weight I want for the device.”

In the last iteration we were shaving off 1g here and 1g there trying to meet the target. For example, the curves on the device changed slightly to meet the weight target. If the difference is less than 1kg, you are making little changes to reach your target and we got well below it in the end.

ND: Being a CTO myself, I know that projects don’t always go to plan. What were the challenges in getting this to market?

BB: We normally have two types of product development projects: ones that are run within the divisions, like the RTC360, and then in the case of the BLK Series we use smaller, more agile teams. A device as the RTC360 comes usually out of a 200- to 300-page requirement document; here we have a vision, few quite detailed design renderings combined in 10-page PowerPoint, and I hand the aforementioned seven chocolate bars to the team. It is more about the vision, although the target specifications are clear from the beginning and defined on the last page of the presentation.

The decision to develop a unique lidar for the BLK2GO was the team’s decision, and I’m happy we did this. I am always stunned by the accuracy of the device. You have an expectation starting out, but the final accuracy was much better. It turned out a little more expensive in the project cost. This is a parameter we can manage internally, and it doesn’t get passed onto the end customer.

ND: Forgive me, but why is the device black? Would it not make more sense for Health and Safety for it to be yellow or similar?

For the first BLK we had to make the choice between silver and black. I’m glad we went with black. It looks great. Did you know that the LED ring is the same as the interior ambient lighting in premium cars? We were after something specific that only they could provide and it goes well with the black!

ND: Can you tell me what you have coming out next? CTO to CTO?

BB: No, but Jürgen did state that every year there would be a new BLK product. This year we broke our promise and announced two devices.

What I can say is that some people look at us as a hardware company, but the software side is equally important to us, and we are working on something with the BLK2GO and our combined reality capture and airborne portfolio for CES this month. 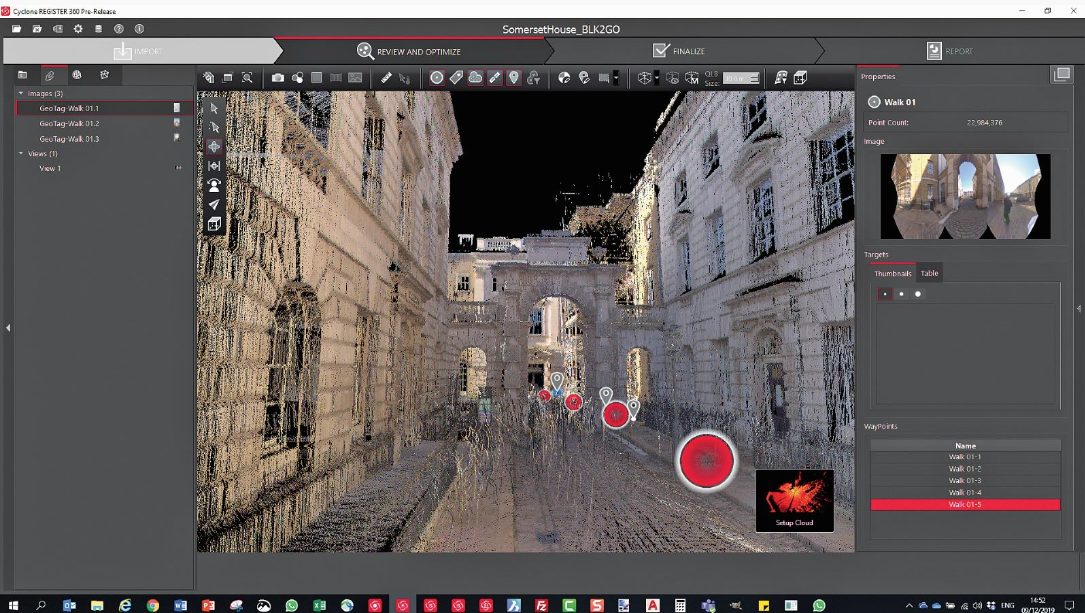 A 3D scan of Somerset House in London, captured using the Leica BLK2GO.