Early adopters partner to prepare for a revolution in domestic surveying.

The Unmanned Aerial System (UAS) industry in the United States is still very much in its infancy, but its potential impacts on the geospatial mapping and surveying professions are indisputable. Currently, the Federal Aviation Administration (FAA) allows UAS flights for public and federal purposes, though applications are mostly limited to military testing and academic research.

While a few private-sector experts fully grasp the potential benefits of UAS technology in domestic surveying, they won’t have the opportunity to demonstrate its true value until 2015, when the FAA is scheduled to integrate private UAS flights into the national airspace. However, for those pioneers in UAS and data collection technologies, the time is now to prepare processes and systems for live operations in 2015.

Private Sector Will Take the Lead

In the private sector, for example, companies Altavian and Woolpert have partnered to refine their technologies based on their combined expertise in UAS and mapping, surveying, and high-precision remote sensing. Both companies have worked for public- and private-sector clients. 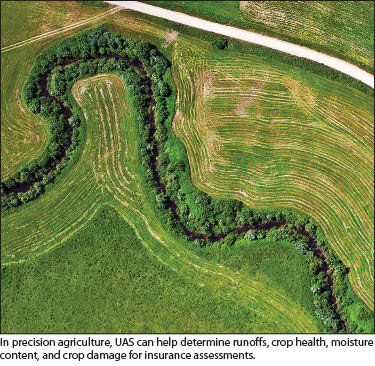 As pioneers in aerial photogrammetry in the civil engineering arena, Woolpert’s traditional fleet of aircraft has flown across the U.S. for decades, compiling their clients’ image databases for a variety of mapping purposes. Altavian has pursued UAS technology—using metric-calibrated sensors—while making positive contributions to science and engineering for their client base.

From Woolpert’s perspective, the advent of UAS is the next logical step in the evolution of the company’s data collection portfolio, allowing them to migrate their existing processes to a more flexible—and, in some cases, more accurate—platform. For Altavian, the advanced remote-sensing and feature-extraction capabilities that Woolpert has developed complement their existing data-collection methods.

Once the FAA has opened the airspace for private UAS purposes, unmanned systems has the potential to revolutionize the geospatial profession. UAS technology is more capable of high-resolution image capture than traditional manned craft or satellite systems, due to its lower, slower-flying capabilities. The variety of sensors greatly expands the data collection options of the UAS platform, placing multispectral, hyperspectral, and lidar-sensing capabilities within reach in the near future.

With its advanced data collection capabilities, UAS will offer many improvements to traditional surveying and mapping processes: 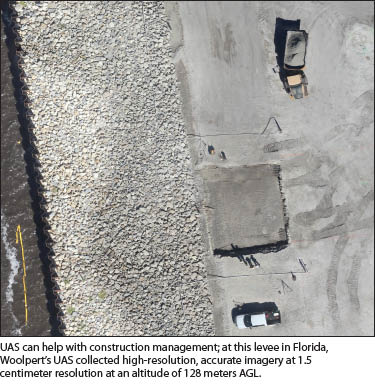 UAS also will affect traditional surveying by filling a void in the market where projects may be too small for traditional aerial mapping and too large for ground survey crews to perform cost-effectively. The flexibility of UAS will provide value in these instances, reducing the size of the ground crew required on-site for establishing boundaries and targets and setting up controls, while relying on the unmanned system to capture the majority of the data.

While the United States and the FAA have been cautious to implement UAS flights into the national airspace, many countries across the globe are aggressively putting commercial UAS applications into their airspace. Australia, Canada, Western Europe, and South Africa are all addressing the needs of the commercial market, allowing participating countries to collaborate with manufacturers to develop and experiment with these emerging technologies at a much faster rate.

In 2012, Congress passed two bills that require the FAA to create research and test sites for the successful integration of UAS into civilian manned airspace by September 2015. In early 2013, the FAA put out a request for proposals from potential sites around the country that would be ideal locations for aerial testing. Among the criteria requested, the FAA sought information regarding aerospace capabilities and the economic impact surrounding the test site. The FAA plans to select six test site locations from these proposals this year.

Again, Woolpert serves as an example of a company establishing itself early for leadership in the UAS market.  It is located close to Wright-Patterson Air Force Base in Dayton, Ohio, the Air Force’s established base for UAS research, development, and testing. The Dayton-Springfield region also submitted a proposal for consideration as a UAS test site.

Woolpert is already serving in an advisory role to local colleges and universities, developing training and educational material on UAS sensor research and development. Based on the assets, capabilities, and resources focused on UAS technologies, the Dayton Region and the state of Ohio are in a unique position to become a significant destination for UAS researchers, developers, manufacturers, suppliers, trainers, and educators.

Sinclair Community College, located in Dayton, Ohio, plays an important role in the region by providing education, training, and certification to create a skilled workforce for all aspects of unmanned aerial systems and related industries. Sinclair hosts UAS roundtable meetings that take place quarterly and are attended by industry, government, and academic leaders focused on the growing UAS market.
UAS as Replacement for Aging Fleet

As with much of the industry, Woolpert uses a fleet of aircraft that was designed in the late 1970s for its aerial photography. When the industry declined in the 1980s, construction of new aircraft ceased. As a result, the industry as a whole is in a bit of a predicament.

Even with diligent maintenance and mechanical upgrades, these traditional piston, twin-engine planes with aluminum airframes won’t fly forever. And, because manufacturers do not make this type of aircraft anymore, considering a comparable replacement fleet is a costly proposition. Depending of the timing of the eventual decline of vintage aircraft and the integration of UAS into the national airspace, the next logical step may by to replace this aging fleet with an unmanned fleet. In time, UAS will likely be the preferred mode of data collection in the industry.

SIDEBAR: A Surveyor Leads the Way

One of the founders of Altavian, John Perry, CEO for the firm, has a significant background in land surveying. John is a third-generation surveyor; his father and great grandfather were surveyors. He has a Ph.D. in geomatics from the University of Florida and has interned for DRMP, Inc. on a field survey crew. He taught geomatics at the University of Florida for almost six years before co-founding Altavian.

AM: Coming from a land surveying background, how did you first get involved with UAS technology?

John Perry: It was apparent to me that unmanned aircraft had the potential to be a powerful new platform for data collection. At the time I started getting involved, the sensor payloads were geared toward real-time video data collection. This proved to be ineffective for mapping applications, and I was given the opportunity to participate in a research project at the University of Florida to develop a new payload purpose-built for geospatial mapping.

AM:  We understand that the FAA is working towards UAS integration in September of 2015. What is the advantage to getting into this space two and half years before this timeline?

JP: There are a variety of opportunities to get access to the airspace under current regulations, particularly for research and public purposes. When the regulations do provide for full integration, I believe that companies that have invested in the technology and developed the training and marketing infrastructure to support it will be at significant advantage to capture market share. Other countries that have opened airspace to unmanned aircraft experienced extremely rapid growth, demonstrating that businesses can “miss the boat.”

AM: In the land surveying community we see two opposing reactions to the introduction of UAS technology into the profession: excitement and fear. What would you say to surveyors who have negative feelings about this technology?

JP: Surveyors have always benefited from advancing technology. From the development of the diopter to the total station, and from the astrolabe to GPS, surveying is an innovation-driven field. Where unmanned aircraft prove to be a cost-effective, accurate, reliable tool for delivering geospatial data to clients, it only makes sense that the industry chooses to deliver that value. Otherwise, someone else will.