This entry is part 64 of 80 in the series Pangaea

Come with me on a flight of fact-based science fiction.

It’s 2024 and you’re strapped into SpaceX’s BFR (Big Falcon Rocket). Destination? Mars! You’ve sold your home and bought a one-way ticket to the red planet. Your heart pounds as the countdown commences. Whoosh and you’re off.

Six months later, you disembark and board a Mars shuttle to your new home. Climbing out of the vehicle you follow your SpaceX guide to an elevator and travel down several hundred feet below the surface.

“Welcome to your new home, Martians!” announces the guide.

“Actually a lava tube, but quite spacious don’t you think?”

“Again, not cave, lava tube. Because radiation. Didn’t you read your brochure? We were quite clear on that.”

While you’re thinking of a way to buy a ticket on the next BFR home, the guide drones on about the plentiful cultural, social, and entertainment amenities. All underground. Sigh.

The fact is that, although many of us are all pretty much “Mars-struck” on the idea of living on that planet, Titan, Saturn’s largest moon (you already knew that), may well be a better destination for colonization.

As part of the Cassini-Huygens mission (which just ended last month, farewell Cassini!) the probe took an in-depth look at Titan. Back in 2005, the Huygens probe parachuted onto the Saturnian moon’s surface for a close-up look. Between Cassini and Huygens we learned quite a bit about Titan, including why it might be a better bet for colonization. 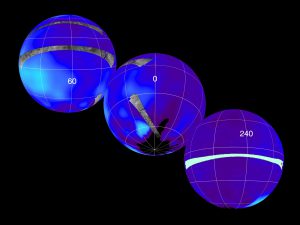 Thick atmosphere. Having an atmosphere (non-existent on Earth’s moon and virtually non-existent on Mars) helps in two big areas: radiation and pressurization safety issues. Titan’s thick atmosphere shields it (and potential colonists) from deadly cosmic radiation. No caves required. Also, if there is structural failure of a habitat or space suit, the result is urgent but not as catastrophic as it would be on the Moon or Mars. Bonus: combine Titan’s thick atmosphere with its low gravity (close to Earth’s moon), and you could literally strap wings on your arms and fly!

Plentiful water: Titan’s subsurface oceans mean abundant liquid water that can be used for drinking and agriculture and further processed into oxygen for breathing and hydrogen for fuel. Handy!

Hydrocarbon lakes. Vast seas of methane and ethane would allow colonists to process polymers and create a wide array of habitats and structures, just like those bubble cities we saw on 1950s science fiction novel covers.

Helium-3 mining. One way to offset the exorbitant cost of a Titan colony would be Helium-3 (He3) mining. He3 is a light, non-radioactive isotope of helium that could power the next generation of safe, non-radioactive fusion reactors. Rare on Earth, He3 is found in vast quantities in Saturn’s atmosphere. One idea is that drones could swoop through Saturn’s atmosphere collecting He3 which could then be processed on Titan for export to Earth. Fuel for Earth, revenue for Titan. Everybody wins! 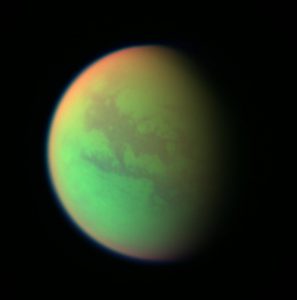 Downside: In the “con” column we find the big issue is distance. It’s 746 million miles (1.2 billion kilometers) from Earth to Saturn. The Pioneer 11 and the Voyager probes took the direct route, reaching Saturn in three years, but Cassini took seven due to its weight. Frankly though, even Mars colonization is hampered by distance and the lack of fast propulsion systems. While warp drives are the stuff of science fiction, however quantum thrusters, Ion drives, and EM drives are propulsion possibilities currently in development that could pave our way to the stars.

Now to re-cast that old Frank Sinatra classic: “Fly me the largest moon in Saturn’s orbit, let me play among the stars . . .” Okay that needs work, I’ll get back to you on that.

To read articles from Jeff on surveying for space colonization, try these:

“Space Colonization: Why Titan Is Better than Mars” Comments