A comment came by on Twitter recently saying, “Geographers always want window seats on planes and trains,” and it was a big Favorite.

We understood because geographers are living spatial scanning machines, a constantly analyzing nexus of the places, spaces, connections, patterns, and relationships that surround them. Thriving on constant extrinsic access to the world, a positional perspective must be sought from wherever one may be located. No matter what point on the earth enables your view, things will be the same yet different. Vancouver, British Columbia, easy to find by location-based technology when Googled, is UTM 49.246292, -123.116226.

Ranking third of the world’s most livable cities, at a distance Vancouver is a dense urbanization of skyscrapers lying magnificently nestled against snow-topped coastal mountains and touching the Pacific in an array of breathtakingly beautiful undulating forested slopes, islands, and the agriculturally bountiful Fraser River delta. 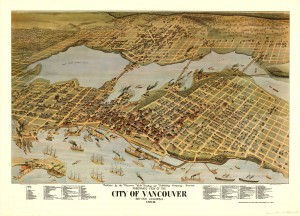 Neither a North American nor Asian city, Vancouver sits on the edge of the continent and the cusp of two worlds. Populated by the geopolitical migrations of the 20th century, its diversity was fashioned by Asians, Sikhs, Persians, and, since 1997, natives of Hong Kong and China. The last influx has added approximately 30,000 millionaires from China using the Canadian government’s immigrant investors program.

There is a constant tension of forces in Vancouver as interactions begin. Ever constant is the earthquake factor. The North American tectonic plate meets the Juan de Fuca plate along the Cascadia subduction zone. This knowledge sits on your shoulder like a monkey every day, and tremors are a way of life. This may be used as a metaphor for everything one experiences here. Vancouver is edgy, anticipatory.

At night it is no less spectacular.  From the 11th floor of a condo in a sea of glistening sister towers of mixed and living spaces, endless imaginings flourish. At $5000.00 a month for each unit, our building caters mainly to transient film industry professionals on location. Gazing through the windows, one imagines what the privately owned penthouse in each high-rise costs. Some are owned by West Van residents who use them only on weekends, others by the new affluent wave who infrequently use them.

A quick vertical by elevator brings you to the street level grid-pattern.  Encounters are enlightening. One down trip is intriguingly punctuated by two fellow passengers, transvestites coming from one of the upper floors, toting incongruent objects of cross-culture: a 24 case of Molson Canadian beer and Louis Vuitton (real) handbags.  Granddaughter stares and thankfully holds her tongue.

The street is Seymour. The building is close to an overpriced chichi bistro. Turning left and walking a block posits at the intersection of Seymour and Nelson. Within the block, there’s a thrift shop; and a new social housing project with apartments for the homeless is materializing.  Vancouver has a very serious homeless problem. With the average price for a single-family detached at $1.26 million, and 1/3 of those are being sold to buyers from China, the answer is obvious.

If you would continue on Seymour, a park emerges, the only garden that the tower residents have.  In the center playground is a gaggle of kids and minders. Childhood is a great economic equalizer. Kids from a myriad of privileges and backgrounds converge playfully oblivious to addicts sharing needles and scoring fixes on the outer perimeter under the bright blue sky.

If you cross the Seymour/Nelson intersection incongruously lays a ‘gathering place’ for the challenged complete with daily line-ups for meals; and you are suddenly thrown into a live version of The Walking Dead. Despite having streets like this in other cities, Vancouver has these scenes in spades.  A gauntlet must be traversed of combos of young, old, male, female, all races; high, ragged, naked, screaming, obscene; rummaging through garbage, begging, sleeping in doorways, turning tricks while the everyday business of the “ordinary” flows effortlessly ignorant around them. It is the detritus of lives and struggles of a cross-section of the world demographic and economic forces.  It is where all the desperate of Canada are drawn because of the climate.

In just two blocks we cross Rolston towards Granville and then turn right two blocks towards Robson. Daughter mutters as we cross the intersection, “Watch how it changes.” As we move forward, we transect physical and cultural boundaries both seen and invisible. Stunningly, the demarcation line is Nelson Street itself. The dilapidated remnants of society and humanity are suddenly transformed by mere meters into a new economic world of designer shops and luxury cars. There the true awfully awesome dynamics of Vancouver’s beauty and ugliness clashed and merged.  The ritzy service- and goods-purveyors of luxury to those of means dropping endless money. A short step across the street, but worlds away, coexisting side-by-side but strangely oblivious to the other.

Vancouver is a crossroads of extreme physical and man-made collisions pressing endlessly. Extremes of the North American continent are driven west to collide with the excesses of the Far East. What is the effect of the co-existence in close proximity to the vulgarities and menace of each? How can one get a fix on this, the clash of human and cultural geography, economic geography, and physical geography; the obscene embodiment of wealth and poverty, fortune and misfortune, beauty and ugliness, need and greed, drugs and vice, worn shoes and luxury vehicles; the pleasure of livability and the pain of non-livability?  Unfortunately, it all depends on perspective.