For most, work is a 9 to 5 grind that slowly eats at your core until you retire, find you have nothing to do, and get bored. Not if you work in the geospatial field though; everyday is a new adventure, and this month took me to the UAE, to be specific, Dubai for the GISWORX 2016 conference, which is hosted by GISTEC (slide from my presentation below). 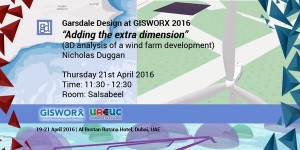 Any thoughts of rocking up and spurting out some rubbish about topology and geometry were quickly quenched when I looked through the program of events that entailed subjects like 3D For Everyone, Geocortex Day, and a rather awesome technical session on 3D GIS (held by myself) – full agenda here. In fact from the moment the plenary started, there was a theme, and that was how to use 3D integration.

Having been to many Esri User Conferences in the past, they mostly involve Story Maps, ArcGIS Online, and getting your money’s worth from your ArcGIS Desktop, so this was a whole new world. As I walked around the stands I was talking with Dubai Municipality about “z mapping.” With Abu Dhabi Spatial Data Infrastructure on standards for heighted data and Barco on immersive environments, it was clear that I was among experts who already had control of their data and were ahead of the mainstream GIS that is current in the UK & US governments at present. 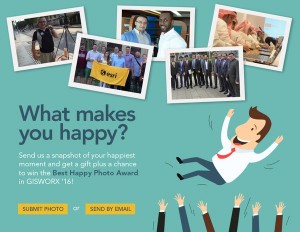 Another clear winner was a talk by Geocortex (photo below) which started with a great slide:

“Whoever thinks money doesn’t buy happiness, send it over to my bank account”

This guy could sell the clothes off your back and you wouldn’t know it! 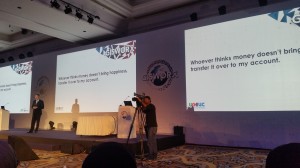 The technical sessions had many hands-on sessions that gave training on CityEngine, Story Maps, and other areas of Esri software. Each one was exceptionally well taught with enough (trained) staff on hand to give guidance to those not quick enough to keep up. I had the privilege of sitting in on my colleague’s—Elliot Hartley—workshop on CityEngine, and GISTEC had not only supplied laptops for everyone, all preloaded with Windows 10 and CityEngine but also with some demo data – something unheard of here in a UK workshop (and the training was fantastic!).

While there, I was told by a few of the delegates I met that it was a little quieter than some years and, even though it was an Esri conference, there was little obvious presence of Esri (except that everyone was using their software). I personally didn’t feel it, and being so busy taking in all the information it felt like a great mix of people, with just enough room to stop and chat when needed.

It isn’t hard to see why the spatial infrastructure and methods for delivery are so advanced. Just looking around Dubai (during the free day I had), you could see development occurring all around. There were (potentially) as many construction sites as there were built structures, all meticulously planned and each one a work of art in its own right. 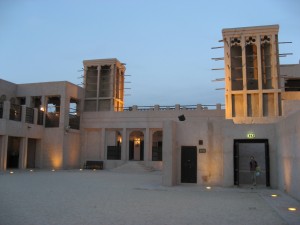 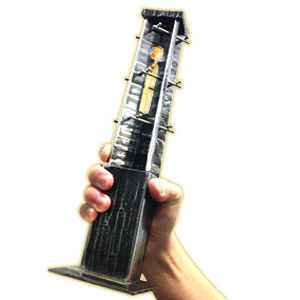 One thing I was glad that I saw was some of the clever “wind towers” shown on the building (in the photo on the left) which was the theme of the EGI awards (right image). These are towers designed to face the prevailing wind and to allow air to flow through the building. This not only creates an airflow but also helps the heat escape, making for a more habitable structure.

To wrap up, would I go again? Yes! Was it worth it? Definitely! A great showcase of dynamic urban planning and development that I would recommend to anyone in the geospatial field, if only to be inspired.