In the previous articles (January and February 2016) I discuss the unreliability of standard deviations when they are computed from a small sample of observations, as well as how to estimate errors in centering an instrument over a well-defined point and how to estimate the standard error for electronically measured distances.

Here I look at the more complicated problem of estimating standard errors in angular observations.

The uncertainty in an observed angle is a function of several smaller errors, but first we need to understand the method that manufacturers use to classify their digital theodolites and total stations.

When the first digital theodolites were created, they realized that the user could no longer distinguish between the qualities of the instruments by viewing the circles through their reading scopes. (Sorry young’uns, this is way before your time.) Thus, the German manufacturers came up with the DIN18723 standard for digital theodolites.

All manufacturers then began to provide a DIN18723 standard for each instrument they sold, which indicated the instrument’s ability to point and read a single direction. Since then, the International Organization for Standards has published the ISO 17123-3 standard, which accomplishes this same function.

Besides this, experienced surveyors realize that longer sight distances result in better angle observations. Additionally, surveying on property where large altitude angles are present results in larger angular misclosure errors, typically. Thus, not all angles observed have equal precision. So let’s look at each error individually.

These consist of two-directional observations of the horizontal circles. Additionally, different surveying firms observe angles using a different number of sets. Most common among these are one (1DR) and two (2DR) sets of angles, which result in an average for the angle observation.

Note that if you are turning an angle only 1D then you are not compensating for the systematic errors present in your instrument. This may be acceptable in mapping and construction surveys, but it is not an acceptable practice in boundary or many other types of surveys.

The major sources of errors in a horizontal angle consist of the quality of the instrument, which is:

As previously stated, the standards are based on the observation of a single direction in both faces. As we repeat our measurements, this compensating error is also repeated for each pointing. The contribution of this error to the overall uncertainty in the angle is shown in Equation 2 where n is the number of times an angle is repeated and ISO the ISO standard for the instrument.

It should be pointed out that I had our second-year students determine their personal ISO and have noted over time that some will be slightly better than the standard of the instrument, some will match the standard, and some will be slightly worse than the standard published for their instrument. In fact, the ISO standard matches their observational abilities and is thus a valid value for their personal abilities, statistically speaking. Thus, the DIN or ISO standards are a good estimate for this error contribution.

So, if an angle is measured 1DR (n = 2) with a 3” total station, the resulting contribution to the overall angular error is as shown in Equation 3.

The target miscentering error is a function of the length of the sights. It is computed as in Equation 4 where:

Similarly, the instrument miscentering error can be significant when the sight distances are short. The equation to determine its contribution to the overall angular uncertainty is shown in Equation 5 where: 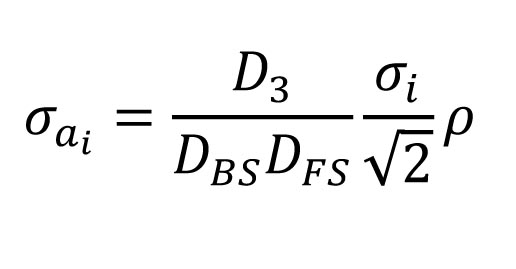 The error in the angle due to instrument misleveling is show in Equation 6 where: 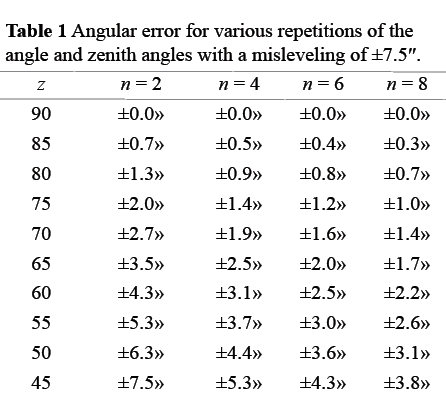 This explains why traverse that proceed up and down steep slopes often have larger angular misclosures than those in relatively flat regions. For those of you thinking, “Wait my instrument has dual-axis compensation,” I ask when was the last time you checked its calibration and how often do you calibrate the instrument?

In the next series of these articles, I discuss how to determine each major contributor to the error in an angle observation. In the next article I demonstrate how to estimate the standard error in an observed angle using these equations. Until next time, happy surveying.