Lions clash with livestock herders in some regions of Africa, and the situation threatens both. The traditional approach of trans-locating lions away from cattle often doesn’t work. This is because once lions are moved many return to prey on livestock, which leads to retaliatory killings by herders. Other trans-located lions die from the stress, are attacked by dominant male lions they encounter, or die from other dangers while trying to return home.

Searching for a humane approach to this problem, Born Free strengthens cattle corrals, called bomas, with tall and sturdy chain-link fencing, making them predator-proof. Traditional bomas made of acacia thorn twigs keep docile cattle in place but cannot keep lions out. For a boma project in the human settlements adjacent to Amboseli National Park, Born Free is mapping where fortifications can best help people and wildlife.

The maps are built with a geographic information system (GIS), which provides location-aware apps for field officers to identify areas that require boma upgrades based on conflict data, and to measure the impact of past boma fortifications on the conflict between lions and livestock.

To date, Born Free has fortified 339 bomas, protecting roughly 100,000 livestock and benefiting close to 7,000 people. The lion population in Amboseli has grown over the years, from as few as 50 individuals in 2008 to roughly 200 today, thanks in part to the boma program. Better quality of life for nearby herders also signals the program’s promise.

“When their bomas were not enclosed, men would spend the night out and weren’t able to leave their home for long because they’re the main protector,” said Linda Kimotho, GIS officer at Born Free Kenya. “But now with a closed boma, you’re sure that your livestock is safe. So, it can even free people to travel and go to other areas to look for alternative sources of income to meet their daily needs.” 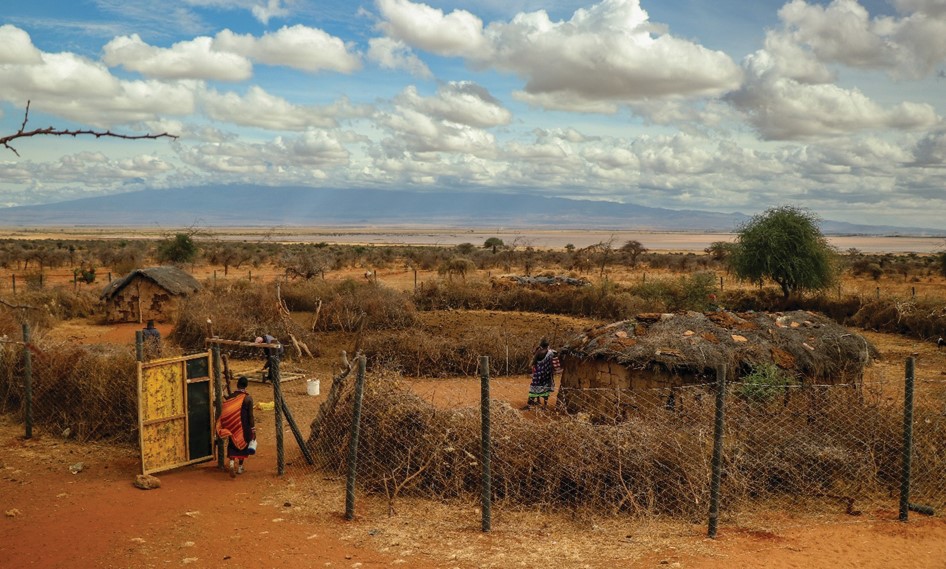 Maasai herders keep their livestock inside protective bomas, sturdy fencing that lions cannot penetrate, to avoid attacks, which often end in the herders being forced to shoot the lions. The Born Free Foundation works to enable herders, livestock and lions to live without conflict.

Born Free’s conservation managers and scouts provide constant support and vigilance as they help the indigenous pop­ulation of pastoralists, such as the Maasai, coexist with lions. They use GIS smart maps to see where human-predator conflict is reported in the Amboseli ecosystem and where conservation managers should be deployed for intervention such as boma reinforcement, community pacification, and raising awareness on ways to peacefully resolve conflict with lions. In conflict hotspots, GIS helps identify schools and communities where they can conduct outreach.

Thousands of Maasai people live around Kenya’s national parks. There isn’t much threat from lions as they herd their sheep, goats, and cattle during the day, however, nighttime attacks are common.

A lion attack can mean devastating economic loss to a Maasai herder. When community members hear of the attacks, they take measures to stop it—often resulting in death for lions already struggling to survive. Even if the herders respond with peaceful measures, such as staying up all night to watch over the cattle and ward off the lions, the conflict makes it difficult for communities to thrive.

Born Free works with the Maasai to reinforce bomas with chain-link fencing strong enough and high enough to keep lions out. Communities that apply for the boma must pay 25 percent of the cost. Born Free gives the other 75 percent and sends a technical team to construct the boma and train villagers on how to maintain it.

“Communities report any lion sightings to another organization that monitors the lions, communicating where the lions are so that people will avoid taking their livestock there,” Kimotho says. “We also encourage herders to embrace better herding practices, such as having more than one herder and engaging adult herders as opposed to children.”

The Born Free GIS team has been working on apps for mobile devices that feed a shared dashboard to keep users up to date about progress and incidents in its two main project areas.

“GIS lets us see the distribution of our bomas and know which areas we haven’t covered,” she said. “We can go there and find out why people in this area are not applying for bomas. Is it that there is no conflict? Is it that they are not aware of the boma program?” 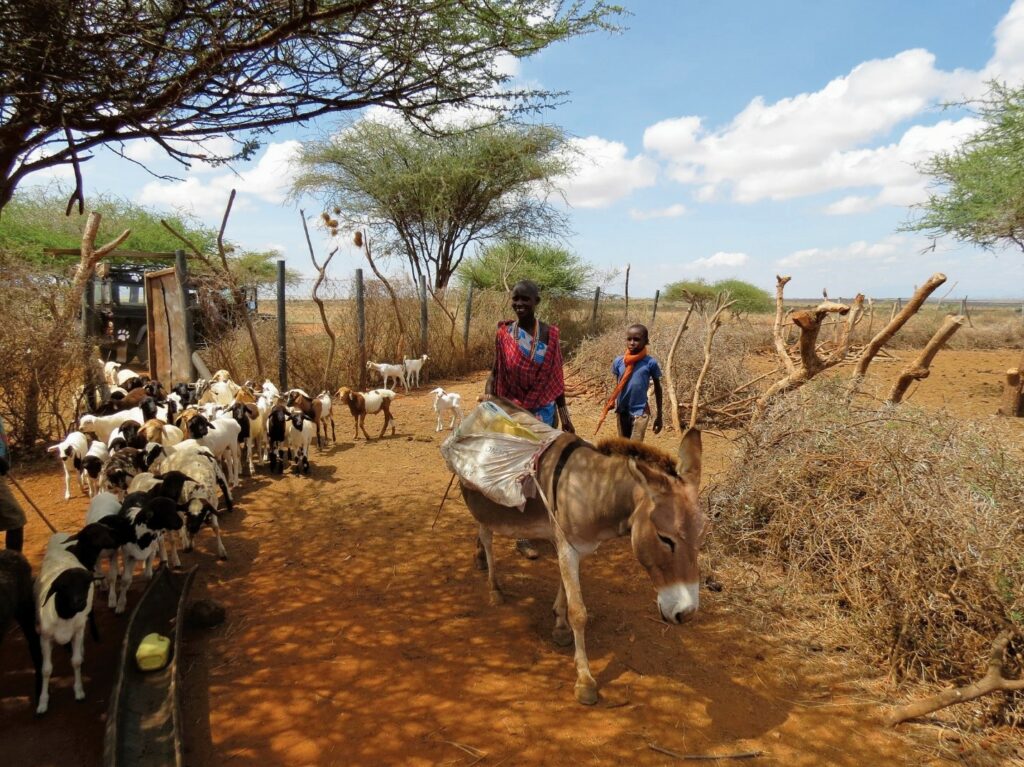 The outreach and location-based research helps Kimotho and the Born Free team learn about practices that may be helpful and lawful. Smart maps give them a way to visualize and analyze the data they collect.

The work to help communities live in harmony with wildlife is a new chapter to the “Born Free” ideal started more than 60 years ago with the publication of the book by the same name. That real-life story by Joy Adamson that re­lated how she and her husband George saved the orphaned lioness Elsa and raised her so she could return to the wild also inspired the beloved 1966 movie “Born Free.”

The actors Virginia McKenna and her husband Bill Travers traveled to Kenya to star in the film and came away with a life-changing experience. Seeing the plight of wild animals inspired them to start the Born Free Foundation for the preservation and humane treatment of wildlife. Today, that foundation con­tinues to fund programs, including those in Kenya’s Meru National Park, where the original story took place.

“In the home of Elsa, we use GIS to visualize collared and uncollared lions, studying their distribution and home ranges to determine their habitat use and resource selection,” Kimotho said. “This helps us understand the current status of lions, identify the major threats that could be causing declines in the current lion population, and develop sustainable solutions to mitigate these threats.”

GIS tools have also been used to classify the vegetation in the park, a critical survey that contributes valuable details for the conservation management plan. GIS also contains more habitat variables—such as climatic conditions and topography—to determine such things as animal density, distribution, and habitat use.

Today’s challenges involve finding a balance between animal habitat and human settlement. That often includes identifying safe, peaceful ways for people to coexist with lions, which are currently listed as a vulnerable species by the International Union for the Conservation of Nature (IUCN).

Almost half of Africa’s lions have been wiped out in just over 20 years, according to IUCN. The lion population in Kenya was 10,000 in the 1980s, and only about 2,000 lions live there today. The Born Free Foundation partners with the Kenya Wildlife Service to help stabilize and grow the lion population in Meru National Park—now home to approximately 60 of the big cats. 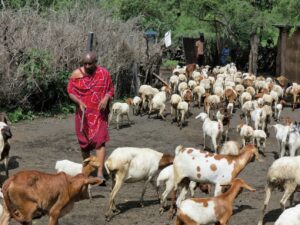 The foundation also uses GIS to educate the community on sustainable water use, and to combat damming of waterways by communities living adjacent to Meru National Park. This practice of diversion dams is having an impact on wildlife in the parks, and the foundation is in the process of mapping these diversions.

The next step is to present this information to the communities and to teach them how it impacts the health of the river and the larger ecosystem along with alternative strategies to efficiently use the river water. 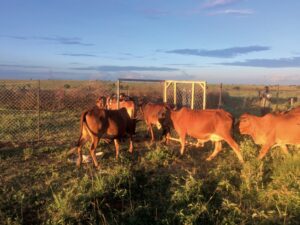 “We want to understand the river systems that feed into the park because we realized there’s a lot of water diversion,” Kimotho said. “We want to understand how they utilize their water, and also see the extent of water obstruction, and how we can engage the community to ensure that as much as they also have water needs, they can make sure that the wildlife has enough water in the parks.”