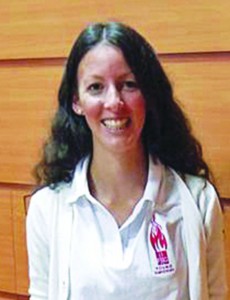 SURVEYING ENGINEER AT THE URUGUAYAN MINISTRY OF TRANSPORT AND PUBLIC WORKS

AS ONE OF EIGHT YOUNG SURVEYORS (FROM MORE THAN 1,200 GLOBAL APPLICANTS), Melissa Robert Sarraute was selected to attend and participate in the 2014 XXV Federation of Surveyors (FIG) International Congress in Kuala Lumpur, Malaysia, representing South America.

A natural leader and skilled public speaker, Melissa has organized, participated in, and presented at meetings and conferences of surveyors (especially young surveyors) and surveying students in South America, including Argentina, Brazil, Colombia, and Uruguay. Melissa also made a presentation at the 2nd International FIG Young Survey- ors Network (YSN) in North America, reporting on her activities in South America.

Melissa graduated from the Faculty of Engineering of the University of the Republic in Montevideo, Uruguay, with a degree in surveying engineering. From 2010 to 2012, she worked as an intern for the municipality of Montevideo in the Land Registry and Valuation Sector. Next she worked at the National Cadastre in the Collation and Registration Section. She currently works for the Uruguayan Ministry of Transport and Public Works Surveying Section as part of the “Geoportal MTOP” project in the discipline of GIS.

Melissa has been designated by the FIG Foundation as a foundation ambassador to promote FIG and the surveying profession in Latin America.