Editor’s Note: What will regulation, certification, and licensing of the surveying profession look like in the near and distant future?

While xyHt neither agrees or disagrees with op-ed articles we run, we do endorse an open and frank dialogue on such important subjects.

You may be thinking (after reading the first installment of this series) that you had not heard of any cases that tossed professional licensing laws and regulations out the window.  Although there have been several such cases, which we will cover shortly, it is the absence of well known successful cases enforcing state regulations that best demonstrates this conclusion.

Back in February 2011, I asked the Florida Board of Professional Surveyors and Mappers for a declaratory statement that would clearly define what aspects of mapping were within the scope of the regulated practice of surveying and what were not.  Their answer was that no part of mapping is outside the regulated scope of professional surveying in Florida.  They said that any process that measured and mapped anything fell within the regulated practice of surveying, regardless of scale, accuracy, or precision.  Implicitly, they said the only level of precision, accuracy, and resolution permitted was survey-grade.   By extension, the only map or imagery that can legally exist in Florida is a survey product.

So, here’s my point: If the practice of professional surveying is so inclusive, why hasn’t the Board sued AAA for their highway maps, or Google over their online maps, or the car companies for their navigation systems, or the many police departments using surveying equipment to document crime scenes, or the satellite companies doing aerial photography, or the utility companies tracking their facilities?  I’ll tell you why: in my opinion, the Board wouldn’t stand a chance in court and the entire charade would tumble down.  Everything is legal until a judge tells you it isn’t.  Why give them a chance?  Maybe Florida’s courts haven’t ruled on this question, but they have in other states.

There are two reasons such a lawsuit against these other mapping interests would fail.

1 – It has been established in the federal courts that all mapping is not within the scope of surveying.  Ten years ago, the Washington, DC District Court recognized the existence of a separate mapping profession when Judge Ellis issued his June 2007 decision in the case of MAPPS et al. v. U.S.A., saying, “the record unambiguously reflects that the provision of ‘mapping’ services in the modern marketplace includes a much broader scope of work than the traditional mapping work of land surveyors” [Opinion, p. 4].  The court’s conclusion was that a mapping profession exists outside of surveying and that the procurement of mapping services was not subject to the federal Brooks Act and its requirement for QBS.  The court also tied the surveying services subject to federal QBS procurement as only those that trace themselves to the practice of architecture and engineering.  In short, the Court ruled that other people besides surveyors compile spatial data and make maps, and the rules governing surveying do not apply to their work.

2- State regulation of mapping and photogrammetry violates two clauses in the U.S. Constitution, the Federal Trade Commission Act and the Sherman Anti-trust Act.  The first Constitutional clause that applies is the Interstate Commerce Clause, which says only the federal government has the authority to regulate business practices that cross state lines.  It also blocks regulations in one state that disadvantage merchants and service providers in other states.  The time when the U.S. Constitution was drafted was a period of great concern regarding the threats posed to the new country by the various self-interests of the states.  Our founding fathers wanted to keep parochial state interests from blocking the free flow of goods throughout the country, so they included, as the third paragraph of Article I, Section 8 of the U.S. Constitution, the power for Congress to “regulate Commerce with foreign Nations, and among the several States, and with the Indian Tribes.”  Through what is referred to as the “dormant” element of this clause, the states are prohibited from unduly burdening interstate commerce or discriminating against out-of-state businesses.

The second Constitutional element that applies to state professional licensing laws is the Due Process Clause contained in the fifth and fourteenth amendments.  The version in the Fourteenth Amendment specifically prohibits the states from taking any action that will “deprive any person of life, liberty, or property, without due process of law.”  Liberty has been defined by the U.S. Supreme Court fairly broadly, if not unambiguously, to include the right to work in the job of one’s choosing.  Like the Interstate Commerce Clause, the Fourteenth Amendment’s due process requirement has an implicit element.  That “substantive due process” element has been applied by the U.S. Supreme Court as placing limits on state legislative actions related to regulating professions, among other things.

For example, in Lochner v. New York [198 U.S. 45 (1905)], the U.S. Supreme Court said it was a violation of the due process clause for the state to restrict the working hours of bakers.  The Court found the public benefit of restricting working hours did not justify prohibiting bakers from working when they wanted.  Similarly, the Court could rule that restricting the mapping profession to licensed surveyors does not meet the requirements of the due process clause because of the lack of public benefits sufficient to outweigh the limitations such a law would impose on mappers, particularly in light of the federal court’s finding in MAPPS, et al.  v. U.S.A.  Even in the typical unlicensed practice case that might come before a state regulatory board, due process is more than just having a hearing in accordance with some defined process.  The first requirement is that the decision be made by an unbiased tribunal.  There is no such state board of professional surveyors that meets this requirement in light of two federal laws and multiple court rulings. 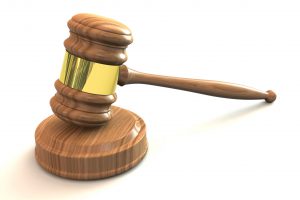 Recent federal and state court rulings have challenged specifics of licensure for other professions. Will surveying be immune forever? Credit: StockMonkys.com

Those two laws are the Federal Trade Commission (FTC) and Sherman Anti-trust acts, which can be reasonably treated as one legal requirement for the purposes of this discussion.  Together, these federal laws are intended to prevent actions that limit competitive trade and create monopolies.  The Sherman Anti-Trust Act has, perhaps, the longest period of application to the question at hand in that federal and state laws to establish QBS processes for procuring surveying services, among other professional services, originated as a result of a U.S. Supreme Court ruling in 1978 [National Society of Professional Engineers v. U.S., 435 U.S. 679 (1978)].  At the time, the National Society of Professional Engineers (NSPE) prohibited their members from responding to any solicitation that included price as a selection criterion.  In other words, the NSPE required its members to seek work only through the QBS process.

The Court ruled that this requirement violated the Sherman Anti-Trust Act, saying, “any official opinion, policy statement, or guideline stating or implying that competitive pricing is unethical” is a violation of the Sherman Anti-trust Act (26 Stat. 209).  The District Court that heard the case “was convinced that the ethical prohibition against competitive bidding was, ‘on its face, a tampering with the price structure of the engineering field in violation of Article 1 of the Sherman Act.’”  In response, the Society argued, “Its attempt to preserve the profession’s traditional method of setting fees for engineering services is a reasonable method of forestalling public harm, which might be produced by unrestrained competitive bidding.”

The U.S. Supreme Court rejected it all, ruling that the Court of Appeals had the right idea in allowing the Society to “adopt some other ethical guideline more closely confined to the legitimate objective of preventing deceptively low bids,” when striking down the code of ethics requirement for a QBS procurement process.  “That engineers are often involved in large-scale projects significantly affecting the public safety does not justify any exception to the Sherman Act.”

So, why is QBS still used?  It is because the courts have adopted a “state action” exemption that says, essentially, legislative bodies may enact laws that cause what would otherwise be violations of the Sherman Anti-Trust Act to be legal.  As a result, we got the Brooks Act at the federal level and the so-called “mini-Brooks Acts” at the state level to establish QBS.  This means that, absent the state action exemption, QBS would be illegal. Very few professional services are acquired through QBS.  For the most part, QBS applies only to architecture, engineering, and surveying services.  Service from other commonly recognized professionals, such as doctors and lawyers, are procured through a process that includes price as a consideration.

Beyond QBS, federal anti-trust laws still have a big impact on the ability of the states to regulate geomatics professions and the spatial data that flow freely on the internet and other avenues of interstate commerce. Survey-generated data, like property boundaries, is no different once it is published. Under the dormant interstate commerce doctrine, courts will strike down any state law that expressly mandates different treatment of in-state and out-of-state providers of identical products or services when the result is better treatment for in-state providers. The state must demonstrate to a high standard that the law does not have a protectionism purpose and that there is no less discriminatory way of meeting that purpose. Such laws will also be struck down if they control conduct that occurs completely in another state.  The overall intent of the dormant doctrine is to prevent the disparate treatment of commercial interests in the different states.