While xyHt neither agrees or disagrees with op-ed articles we run, we do endorse an open and frank dialogue on such important subjects. Read part 1 and part 2 on here on our website.

There is clearly disparate treatment of commercial interests in the surveying, photogrammetric, and mapping fields.

Florida takes, perhaps, the most extreme view whereby everything related to photogrammetry and mapping is regulated as the licensed practice of surveying.  Not every state has adopted such a position.

In South Carolina, for example, the law includes a class of license called a Professional GIS Surveyor, who “creates, prepares, or modifies electronic or computerized data including land information systems and geographic information systems relative to the performance of the activities described in subsections (a) and (b) above” [S.C. Code Ann., §49-22-20(26)(c) (Supp. 2016)].  (Subsections (a) and (b) are the activities reserved for professional land and photogrammetric surveyors, respectively.)  It then goes on to list a number of exceptions from the chapter itself in §49-22-280 and from the practice of TIER A surveying, which includes the Professional GIS Surveyor, in §40-22-290.

Notably, this last section exempts “the use of all civilian or commercial remotely-sensed satellite data” but not aerial photography [§40-22-290(5)].  Thus, photogrammetry using aerial photography is regulated, but photogrammetry using satellite imagery is not.  Fortunately for me and most other GIS practitioners, South Carolina law also says “nontechnical maps … prepared by private firms or government agencies for use as guides to motorists, boaters, aviators, or pedestrians” are exempt from regulation as a surveying product [§40-22-290(1)(a)].  (The term “nontechnical map” is not defined.)

Most states also call for a licensure applicant to meet certain requirements specific to that state.  Virginia, for example, requires applicants to pass a “Virginia-specific photogrammetrist exam” in order to be licensed as a surveyor photogrammetrist [18VAC10-20-310.B.1].  This same requirement exists when an applicant is licensed to practice in another state and seeks licensure in Virginia through comity [18VAC10-20-360.C].  Although it appears to treat in-state and out-of-state providers in the same manner by requiring all to pass a Virginia-specific exam, licensure itself presents a formidable obstacle to doing business in the state when the practitioner resides in a state where licensure is not required to do the work offered. 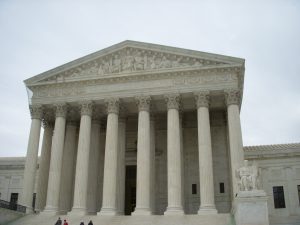 The Supreme Court of the United States has weighed in, as far back as 1824, on services as relates to the Commerce Clause. Some people view such cases as potentially having bearing on the future of surveying licensure.

The problem is that each state has its own requirements—requirements that place a burden on interstate commerce.  Technology now allows me to make a highway map of Florida for sale in that state while I work in South Carolina, where I do not need a license.  Florida says the map must be created by a Florida-licensed professional surveyor and mapper.  Do the laws of Florida or South Carolina apply to my work?  If both apply and the company is based in South Carolina, it can make all the navigation mapping systems it likes—as long as it doesn’t include Florida in its coverage.  If it does, then Florida says the person producing the map has to be a Florida-licensed professional surveyor and mapper.

This scenario does not mean that South Carolina’s laws are free of potential issues with the dormant interstate commerce doctrine simply because they are less restrictive than those of Florida.  My out-of-state mapping scenario relies on commercial data collected by others.  While states like South Carolina may exempt using spatial data compiled by licensed professions from state regulation, they do not exempt collecting such data.  So, while my mapping work may be protected, the same may not be true for the company compiling the raw data upon which I base my map.  Google, for example, compiles its maps using a combination of aerial photography and GPS-derived location data collected by StreetView cars.  I can assure you that surveyors are not flying the airplanes or driving the cars.

But, really, every state is in conflict with the dormant interstate commerce doctrine when it seeks to regulate an activity that exists in interstate commerce.  And it doesn’t matter if the mapping is done only in that state.  This is not a new thing.  As far back in time as its decision in Gibbons v. Ogden, 22 U.S. 1 (1824), the U.S. Supreme Court found that in-state activity could be prohibited under the Interstate Commerce Clause when it was part of a larger interstate commercial scheme.  In Swift and Company v. United States, 196 U.S. 375 (1905), the Court found that business done even at a purely local level could become part of a continuous “current” of commerce that involved the interstate movement of goods and services.  This particular case dealt with the beef production industry, but it applies equally to the spatial data production industry, especially when it puts together locally produced data and maps to create a national product.

In Justice Holmes’ opinion for the majority, “When this is a typical, constantly recurring course, the current thus existing is a current of commerce among the States.”  He further said the purely in-state practice of beef dealers could be found to exist in interstate commerce because “its effect upon commerce among the States is not accidental, secondary, remote or merely probable.”  This means the production of spatial data (our “beef”), which is pervasive in interstate commerce (online maps), occurring in one state alone will nevertheless qualify as interstate commerce because of the continuous “current” of commerce upon which it exists.

That continuous current is best exemplified by the Internet.  The Internet is a place of commerce for spatial data.  In a federal district court decision of 20 years ago, the court said, “The unique nature of the Internet highlights the likelihood that a single actor might be subject to haphazard, uncoordinated, and even outright inconsistent regulation by states that the actor never intended to reach and possibly was unaware were being accessed. Typically, states’ jurisdictional limits are related to geography; geography, however, is virtually meaningless construct on the Internet” [American Library Ass’n v. Pataki, 969 F. Supp. 160, 168-69 (S.D.N.Y. 1997)].

Lest you think that it is still a stretch to extend the scope of the Interstate Commerce Clause to state regulation of surveying and, potentially, all spatial data, I need only list one more example: The Civil Rights Act of 1964.  Title II of this landmark legislation, which prohibits discrimination in “goods, services, facilities, privileges, advantages, and accommodations of any place of public accommodation,” was founded on the Interstate Commerce Clause and has been repeatedly ruled by the courts to apply to what may be otherwise described as very local decisions.  The reason is those local decisions will impact people coming from other states.

The Act defines interstate commerce as existing whenever goods and services may be provided to persons from other states, or when any of the inputs to the service moved in interstate commerce.  Thus, even though each state limits its rule to its own jurisdiction, a client seeking to identify developable property in many states has to deal with a number of state-specific regulatory schemes when procuring mapping services.

This line of reasoning is not some outlandish conjecture.  Federal preemption of state actions is well known.