As I approach my 30th anniversary of being a licensed professional land surveyor in California, I can’t help but think about how things have changed over those years.

It has changed everything. For me, it started with EDMs, then total stations. Handheld calculators were emerging. When the HP 41-CX came out, that was the apex, for me anyway. And CAD. What about CAD? Revisions done on the computer instead of burning holes in mylar? Yes! Data collectors? No more writing everything down in field books. Digital bar-code levels that took the human error out of the equation? Well, almost. Mind-blowing stuff.

Then GPS came along and totally changed our ability to measure things. It started with the “GPS crew” who worked at night or when the satellites were available, collecting data with their magic boxes. Data was so accurate we had to redefine out National Spatial Reference System. Before long, everyone had GPS. Now it’s in your phone, your car, your bank, your electrical grid … everywhere.

Then came remote sensing. We had photogrammetry and aerial imagery. But then came LiDAR. Not just from the air, but from the ground, and moving. Incredible amounts of detail and data. We have systems that can operate at highway speeds and collect a million points per second, plus imagery, and the software and computers to digest that mountain of data. Amazing!

But apparently that wasn’t enough? Now we have “drones” or unmanned aerial systems (UASs). They employ all of the above to provide us with massive amounts of data collected in literally a matter of minutes. It boggles my mind when I stop to think about it. All in the span of about 40 years.

As surveyors, as the masters of measurement, we have embraced and taken advantage of them all. Yes, we have and continue to add these wonderful measuring tools and technology, in general, to our arsenal. We should be proud of that, for we are the most qualified to do so. Yes, we have done a great job of recognizing how new technology can help us to improve the quality of our work, make us money, work more safely, and save labor. Kudos for that.

But we missed one along the way. A big one.

We have all heard the stories, seen examples, and maybe even gotten work or had our work called into question because of grossly inaccurate boundary lines being depicted in a GIS. We know of non-surveyors running amuck with GPS devices of all flavors, set to collect and report data in who knows what system, dropping their data into a GIS with little or no understanding of the accuracy of the position. The horror stories are endless. Warping and rubber-sheeting to make pretty pictures, or in actuality a product that may serve the needs of the user. Maybe.

How did this happen? We were all screaming, “Get it Surveyed” from the inception of GIS technology, complaining about the poor quality of the products and even reporting unlicensed practices. We tried to stop or discourage it, didn’t we? Yes, we did. That was our mistake.

The truth is, those warped parcel lines and other positionally inaccurate data in a GIS are our fault. Yes, in this case, it really is the surveyor’s fault.

Had we gotten involved from the beginning, providing solutions instead of opposition, those boundary lines would be greatly improved and most everything else along with them. There are many local examples where surveyors in a position of authority, say County Surveyor, pressed their agency to provide a control network, typically tied to the National Spatial Reference System, for surveyors working in their jurisdiction to use. Then, through the ordinance process, they required that all mapping products produced for, or reviewed by, their agency be tied to that system. They recognized that by doing this, they were providing an accurate and precise reference system for the foundational layers of their budding GIS applications to which all of the other data could be aligned. The control network served as sort of  “toothpicks” for their data sandwich. 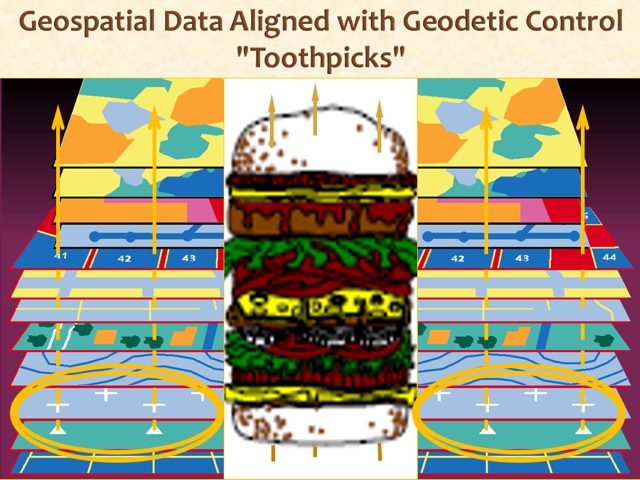 It is no accident that geodetic control is listed as a core framework theme for the National Spatial Data Infrastructure. The same is true at the state level in California. Geodetic control is the glue that holds it all together, or should have been.

Unfortunately, the only profession with the authority, the experience, the knowledge, and the capability to have made that happen early on was too busy crying foul, snubbing our noses, and bad mouthing this emerging technology and tool. We had no more chance of stopping the enormously powerful and valuable tool we called “Get it Surveyed” than we could have stopped the use of GPS.

It’s not too late to work to fix these issues, but convincing the keepers of the GIS to pay for us to do it after the fact will be a tough sell.

The GIS boat was not missed everywhere. In many countries, you will find that “GIS people” went to the same schools as surveyors, and those in charge of official national, state, region, or municipal GISs are surveyors. The prevailing view in these places is that there is little distinction between GIS and surveying; GIS is simply how you store and analyze geodata, and some themes (or layers) need to be more accurate than others—like the geodetic control, parcel, and land management layers—but other themes do not have to be so accurate, and no one frets much over that.

The more accurate data is input and managed by surveyors. For instance, the Netherlands has a formal real property Cadaster where surveyors need not only specific education and experience to survey, but also additional certification to be able to work in Cadaster.

The one thing we can do is embrace GIS technology as it applies to our work today. It is powerful.  It was critical to the successful 2010.00 realization of NAD 83. I have heard the NGS staff who led that effort state that it could not have been done on that magnitude without GIS.

So, the next time you see obviously inaccurate boundary lines in a GIS, rather than groan and blame some “CAD jockey,” accept that it was our fault that it looks like that and move on. We allowed it to happen.