After more than 100 years of largely being ignored by the general public, the meridian stones in front of city hall in Frederick, Maryland, were ready for their close-up.

The stones, six-inch-tall pillars that stand 150.76 feet apart in a true north/south alignment, are familiar to local surveyors but not to the average person, making them something that Lance Duvall, head of Frederick’s audio visual department, wanted featured in a video.

His office has been producing short documentaries for the past three years highlighting the city’s long and interesting history, and he figured it was high time the stones received their due. He also saw it as a good project for his Frederick Community College intern, Gabriella Punturiero.

“I always like to give the interns a final project. They can use that video to help them get a job or in their application if they want to attend a four-year school,” Duvall said, adding with a laugh that when he initially gave Punturiero the assignment, “it was like that Charlie Brown scene where he’s all disappointed and says, ‘Oh, no, I got a rock.’”

But, like a good mentor, Duvall told her, “You like history and you’ve always wanted to do a documentary—this is your chance.” He also told her, “you’re going to have to make this interesting—it’s about two stones. How are you going to make it visual and entertaining?

But once she got started she found all these visuals, these archival photos.”

Punturiero also found her inspiration while talking to Wayne Twigg, of the Appalachian Chapter of the Maryland Society of Surveyors, and Jim Rohochik, surveyor for the city of Frederick.

She said, “Both of them were obviously very passionate about what they do. I knew nothing about land surveying, and they made me see how important the stones are.”

The stones were certainly important to Frederick’s first mayor, Lawrence Brengle, a land surveyor, as well as to local surveyor Thomas Woodward. They explained to Punturiero that, in 1748, city founders used the British method of laying out the city in squares, so individual lots were created within the squares.

But, “they had discrepancies in their work, both in direction of their compasses and in their measurements,” Twigg says in the video. “A quarter of an inch off led to a discrepancy of 5 feet to 20 feet in various places. Establishing true north assured all land surveyor’s compasses would read the same. A meridian calibration baseline had to be established.”

The film’s narrator explains the problem of magnetic north being ever-changing. “Practically speaking, however, the stars are constant. Land surveyors were able to use astronomy to find true astronomic north,” and the stones were used as a guide.

Maryland passed a law in 1870 calling for a meridian line in each county in front of the courthouse and required land surveyors to check their compass and chains yearly to assure accuracy.

The current interest in the stones began in the 1970s when a TV camera truck present for an event at the courthouse—now city hall—had knocked the south magnetic stone out of alignment. The event resulted in the pillar shifting almost 10 inches off. 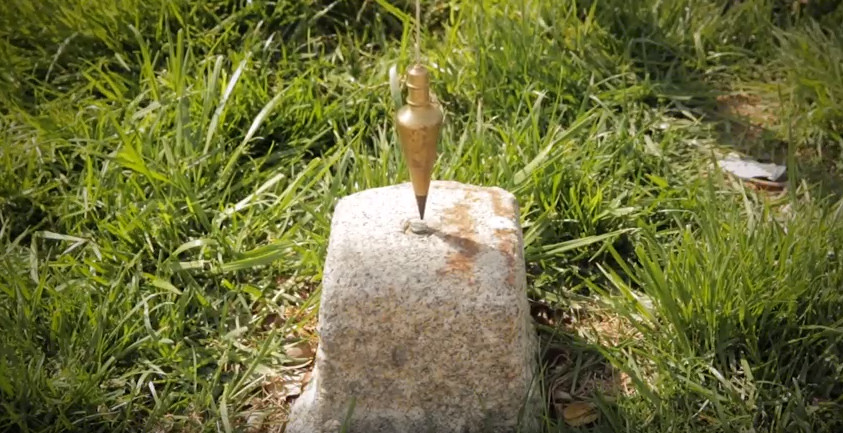 “Although technology was more advanced and land surveyors were using more precise equipment, it was still essential to realign the stone,” says the video’s narrator.

Rohochik tells the audience that, “a land surveyor today has a job we all call ‘following in the footsteps.’ What that means is that it’s our duty and our job to recreate what has been done before so we can determine what needs to be done now.”

To realign the stone, the Appalachian Chapter jumped in, and several members pulled out the 400-500-pound pillar so it could be properly installed once again.

But there was a problem determining where it should go because all the street lights and other light pollution made it hard to see stars in the night sky. Several blocks away in Baker Park, a wide-open space was perfect for an obser

vatory station, basically a hut with a hole in the roof, which The Appalachina Chapter built.

They sighted Polaris, the North Star, through the hole and used the weather vane on top of city hall to make computations.

“It was a lot of hard work,” Twigg says in the video. “We mixed concrete and dug dirt. We left things prettier than we found them when we were done.” The chapter also installed a bronze plaque to explain the stones’ purpose.

Living to a Standard

The words of the two surveyors in the video also speak volumes about the meridian markers’ importance.

Rohochik says, “The stones, in my opinion, are a physical historic representation—still in the ground—of a standard of accuracy that was needed at the time of the surveys being done in the city of Frederick. And those stones established a standard of care that surveyors were responsible for the health, care, and well-being of the general public.

“Every professional land surveyor today still has that same duty and responsibility for the standard care for the health, well-being, and welfare of the general public.”

Twigg followed with,” The stones remind us that we need to live our lives according to a standard.”

Duvall, standing in his tiny office inside the front door of city hall, said that, “I could have done four videos on what they were talking about. Living to a standard is what they wanted us to drive home. 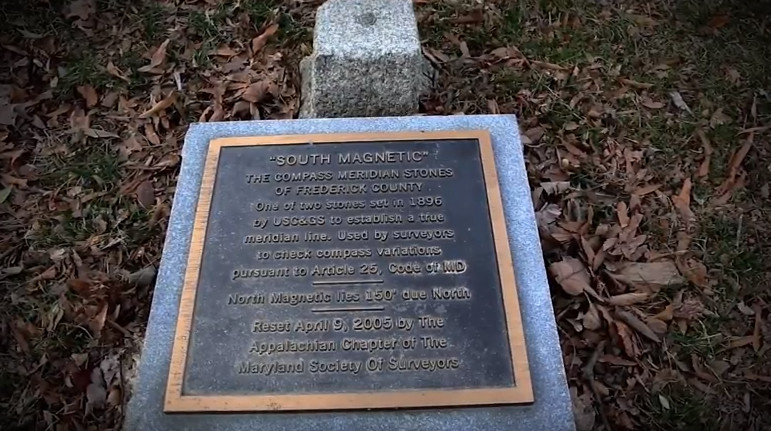 “[Until the video project,] I didn’t know the stones had such a historical connection with surveying,” he said, adding that previously he knew the stones as a “Pokemon Go” spot, referring the Augmented Reality game that first became popular last summer.

Sali Dimond, also with the audio department, said, “That’s the fun part, uncovering the story. Just think of all the things around you that you take for granted.”

Duvall added, “I was glad to highlight the surveying department so that people would know what they do.”

Duvall and Punturiero presented the video to good reviews at a meeting of the land surveyor chapter. “I was very happy with how it turned out,” she said.