The term one-man crew takes on new meaning in Antarctica.

In 1841, a U.S. expedition mapped a portion of Antarctica, proving that it was a continent. Generations later, surveyors such as Corey Biddle continue to map and survey the area with the latest equipment. But sometimes the rough conditions in this frozen land–where GPS antenna cables can easily snap in the bitter cold–send them back to using basic tools and techniques.

Biddle recalled the snapped cable incident that happened when he was setting out GPS equipment in -50° F temperatures.

“I couldn’t use the RTK, so I went to a total station, but the battery lasted only 10 minutes. I had to go back to the 1950s and use a level,” he said, pointing to the way he works in seemingly impossible situations. “You can’t ever say something can’t be done; you just do it.” 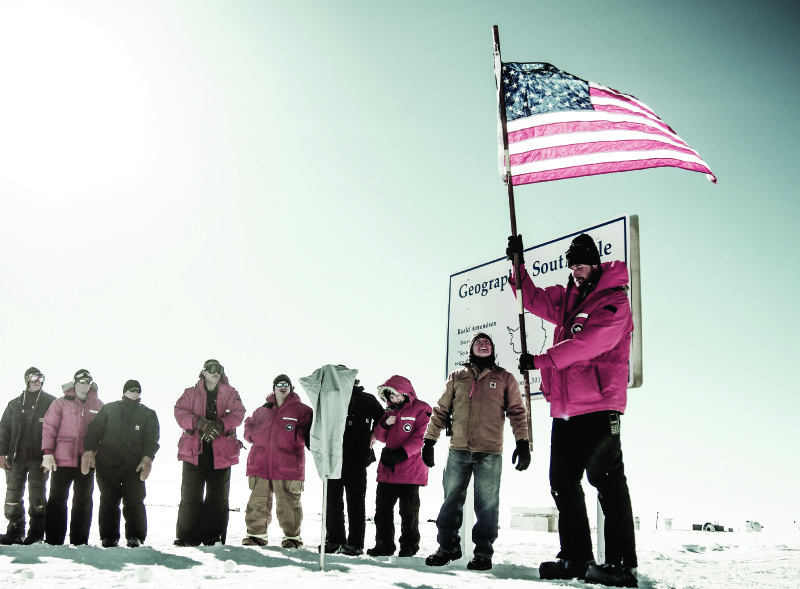 At a pole marker ceremony on January 1, 2015, Biddle sets the South Pole location, with members from different departments that run the station.

The Bend, Oregon resident is currently taking a break after two seasons in Antarctica as part of a National Science Foundation project that has been operating without interruption since 1956. According to the NSF, research goals encompass trying to understand the region and its ecosystems; studying how the area affects the rest of the planet, including climate; and using the location to study the upper atmosphere and space.

Three year-round research stations are used by glaciologists, earth scientists, biologists, and other scientists, with support coming from professions including surveyors. Biddle said Lockheed Martin is the prime contractor, with sub-contractors including PAE in Arlington, Virginia that oversees the surveying component.

Biddle said he had always wanted to go to Antarctica, and seven years ago he responded to a job posting. “I didn’t get the job. Two years ago I got it. In between I did some remote work in Alaska and other areas,” to enhance his resume. Also adding to his qualifications for the job was the time he spends in his off hours fulfilling a passion for mountaineering and rock climbing.

Biddle started his career with thoughts of being an architect, “and then surveying was really appealing. Mostly I like the aspect of a job where I was half time in the field and half time in the office.” In Antarctica, “you basically work on your own; there’s not a lot of office resources.”

His first season was spent at the South Pole, and last year he was based in McMurdo, on the southern tip of Ross Island. McMurdo is the continent’s largest community, with more than 1,000 people during the summer season. In the winter the population drops to roughly 150. Personnel and cargo going to the South Pole must pass through McMurdo, making it a gateway. Additionally, it serves as the hub for most of the United States’ scientific endeavors.

Biddle said his job at the pole encompassed monitoring and predicting settlement rates of structures built on an ice sheet. In McMurdo, he said,

I worked to revise the operations of the survey department while performing all survey-related projects, which was inclusive of aeronautical surveys of two existing airfields, survey support of various science projects, topographic surveys of remote permanent field camps on Ross Island and within the Transantartic Mountains, updating geodetic control throughout the region, horizon surveys for satellite visibility, and ice surveys on the sea ice for shipping lanes.

“Surveying work is generally straight-forward if you have the experience,” says the man who has worked as project manager, party chief, and senior survey technician throughout his career. The challenge comes with the surroundings. He was greeted on his first tour with temperatures at -77° F. Storms also prove to be wicked, with wind gusts of 90 knots not uncommon.

“The equipment doesn’t like it; the body doesn’t like it,” he said. One piece of equipment he used was a Trimble R10, which he said is rated at -40° F, but a lot of the time it worked way beyond that. Biddle sent the company photos of the equipment in action.

Just having the necessary equipment was also a challenge. “If you don’t have what you need, in all likelihood you’re not going to get it. And to get something serviced is extremely hard. You have to learn to adapt, and you have to maintain the equipment–take good care of it,” he said. 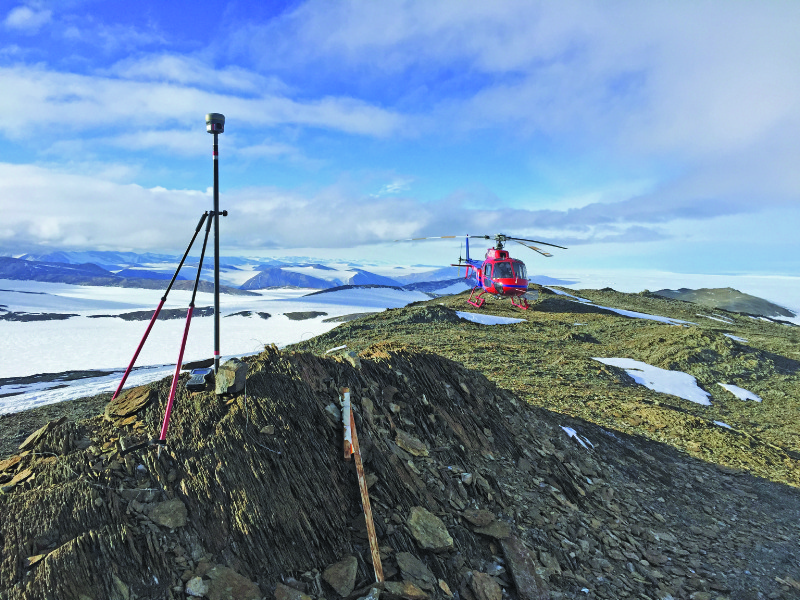 Biddle performs a geodetic control check in the Transantarctic Mountains.

“Safety was a big concern there,” Biddle said. He followed the rule that you needed a visibility of at least 100 feet before you could go out in the field, but sometimes after you went out, conditions changed so that “you couldn’t see past the hood of the vehicle. There’s all sorts of training before you even go on your first hike. You need to check in with the fire house before going anywhere, and if you’re off-station you must always carry a radio.”

At the station the roads are built on actual land, but the airport runways are on ice. Out in the field people drive on roads, “but a lot of time you didn’t need one,” he said, traveling as he did in a Ford F350 with mat tracks. One of his jobs was to flag the roads to know where they were.

Another task was to set up alignment markers on the airfields, named Pegasus and Williams. “Williams moves 400 feet a year, so all the navigation charts for the pilots have to be updated every year” to protect their safety.

A doctor and an assistant are on-site, and Biddle noted that, “there’s always someone who breaks a foot.” Occasionally someone will have to be flown out to Christ Church in New Zealand, the closest place with a full-service hospital. 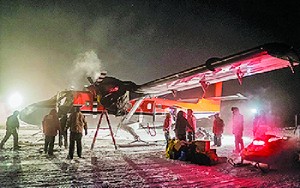 You may have read elsewhere that this past June, two workers were dramatically evacuated for medical reasons from NSF’s Amundsen-Scott South Pole research station. The only other winter rescue flights in the past 60 years were in 2001 and 2003.

There’s no doubt that you are in a “remote, potentially hostile environment,” Biddle said. “But there are people around. I’ve gotten into worse environments on my own” during outdoor recreational adventures.

Being unable to see, even without a swirling snow storm, is also something to get used to. The season runs from July to the end of February or beginning of March, and, “when you first get there, there’s 24 hours of darkness,” he said, with daylight increasing with each passing day.

Making It a Home

Williams airfield, about six miles from McMurdo, has 20 buildings, including a kitchen and dining hall, a maintenance shop, a firehouse, research facilities, and housing, all heated by large boilers. At the end of the season the buildings are dragged on top of large berms, to be moved back when crews return. This adds to the surveyor’s job of mapping out where the buildings need to go. 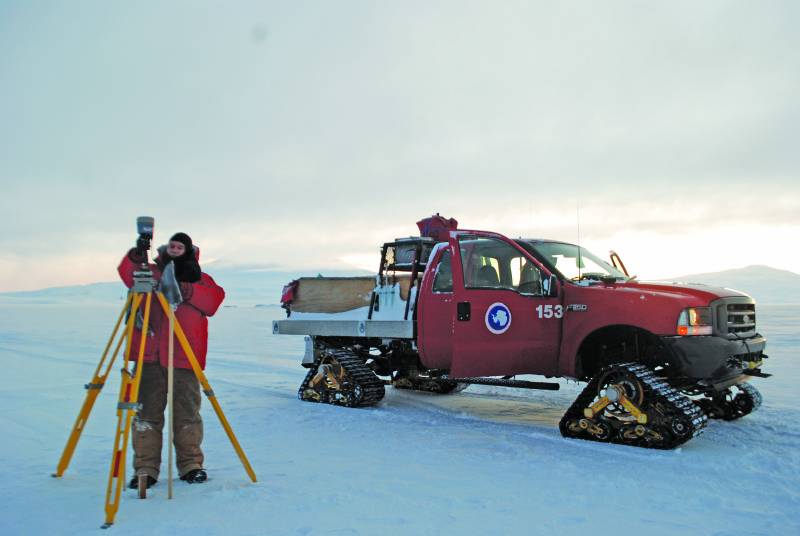 Biddle sets up a base station at an airfield site on the ice sheet.

Biddle described the housing as similar to a college dorm with everyone having a roommate. “It’s tight quarters with not a lot of privacy.” Socializing usually takes place over cups of coffee in the galley. Because the season falls during Thanksgiving, Christmas, and New Year’s Day, Biddle said there are special dinners and parties to mark the holidays.

Sometimes crews from other countries arrive and add to the mix. Biddle said Australians are especially well represented. According to the National Science Foundation, more than 60 countries have been involved in research there.

A ship arrives once a year with scientific cargo, and the U.S. Air Force regularly flies C-130s and C-17s to the area, Biddle said. Cargo flown to Williams has to come on planes equipped with skis. The planes also carry the mail, which is a welcome distraction. In addition to letters from home, the mail also may have packages containing items you couldn’t bring along because each person is restricted to just 75 pounds.

“There’s a lot of ordering from Amazon,” Biddle said, whether it’s better boots because the ones you brought aren’t doing the job or books to help pass the time and supplement the local newspaper, The Antarctic Sun.

When the ship comes in, a channel needs to be cut through the ice. Biddle has had to survey the channel, going out in a helicopter more than a month ahead of the vessel’s arrival to check the thickness and quality of the ice.

Just as he sometimes has to resort to more simple measures to get the job done–think about the use of a level when the total station became sidelined by a frozen battery–he learned to depend on seal activity to see what was what. “If there are a lot of seals hanging around, that means there is a crack or hole in the ice where they are coming through.”

Seals and penguins are common around the station, and this past mission while doing a topographic survey out in the field he encountered a colony of penguins numbering in the thousands. He acknowledged being awed by their cute antics, taking lots of photos. 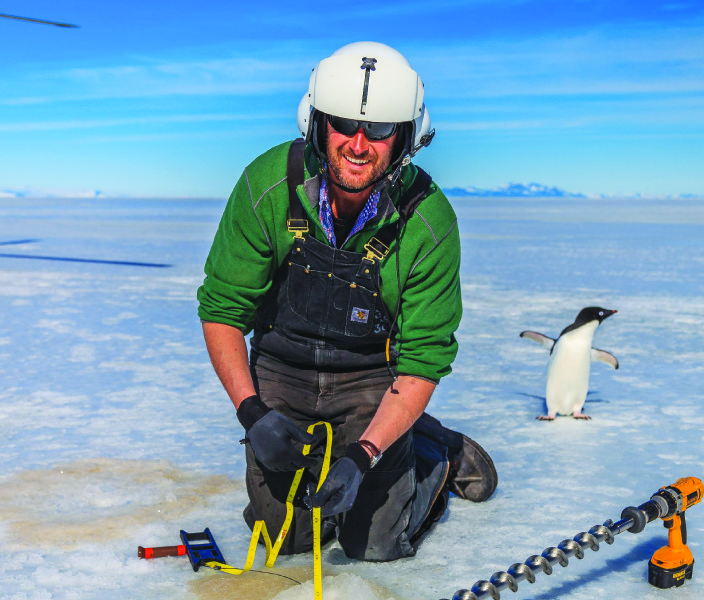 Biddle appreciates the presence of a friendly visitor while surveying ice thickness and quality for a shipping channel. 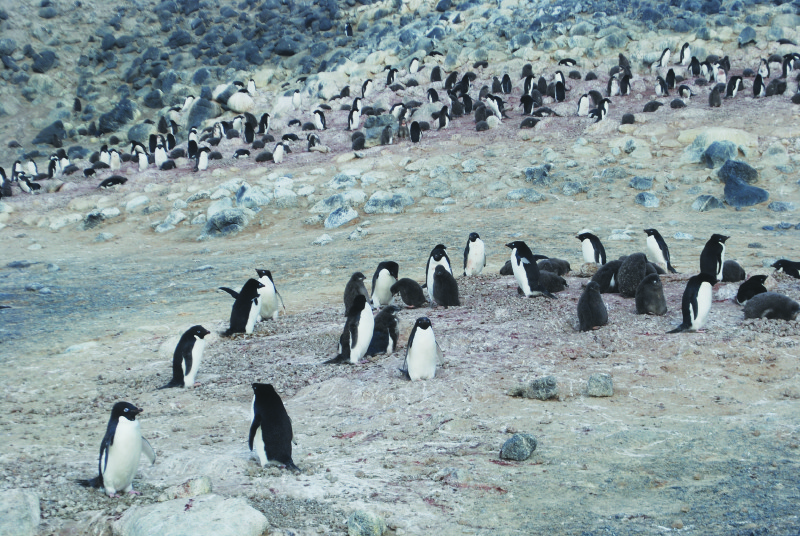 Biddle performs a topographic survey around a penguin colony at Cape Royds, the site of Shackleton’s Nimrod hut from his 1907-1909 expedition.

The photos will have to serve as reminders of the experiences that most people can only think about as Biddle sits this season out. Instead, he’s focusing on getting certified in areas that will enhance his career while planning for a return trip in 2017.

“Oh, definitely,” he says about recommending the job to other surveyors. “But you really do have to be a one-man surveying operation. You have to know the office side, know how to do the data flow. You are cut off from any technical support. You have to be good at problem solving”–and perhaps knowing how to read seals.

“Surveying in the Land of Penguins” Comments