This article appeared in xyHt‘s e-newsletter, Field Notes. We email it once a month, and it covers a variety of land surveying topics in a conversational tone. You’re welcome to subscribe to the e-newsletter here. (You’ll also receive the Pangaea newsletter with your subscription.)

As I have aged and learned, I have worked diligently to improve myself, whether through changing flawed behaviors or altering how I process the daily journey of life. I would like to think that those closest to me would say that I have been successful, at least to some degree, in becoming a better person. I know for sure of one change that has been positive – the ability to just say no.

Of course, the fallout of saying no must still be evaluated, but I have found that, more often than not, the freedom gained outweighs the consequences.

Thinking back on surveying settings where saying no came in to play, I can recall a few. It does not seem to be in the nature of a surveyor to say no, as we typically want to get things done, even when someone puts us in a difficult situation where saying no would be acceptable. However, there are times.

Many years ago, I was hired by a real estate broker to survey the property he had a pending sale on. The deal was in jeopardy because the adjacent owner had casually told the seller that several years prior he had physically moved their common rear property corner because he thought the garage he had built was encroaching. Upon learning this, the seller immediate knew he had to disclose this, or correct it, before the sale went through.

I arrived at the property and met with the two owners and walked the property with them. The adjoiner showed me the corner he had moved and roughly where it had been prior. I found the front common corner and a few others within line of sight that I could use to make checks, then turn the angle to run the line in question.

The broker paced anxiously. After making my ties and calculating the angle, he walked over to me with his back to the others and said, “Now, it’s really important that this line miss that garage or I will lose my commission, so whatever you do, make sure it misses it. Got it?” Loudly, I said, “What did you just say? My job isn’t to line your pockets, it’s to protect the public and perform a proper survey regardless of who my client is.” Then I looked at my helper and said, “Pack it up.”

The broker was frantic, apologizing and begging me not to leave. The owner asked me what had happened and I told him. He then said, “I need to know the truth and get this fixed. If you won’t work for him, will you work for me?” I told him that a new written contract would be required, but that the broker owed me my minimum fee for showing up. He wrote me a check on the spot. I agreed to do one more thing before leaving to return later with a new contract.

I turned the angle representing the line in question and quickly determined the garage was almost eight feet over the line. Whole new ball game.

I convened with the seller and adjoiner and explained the options and what I was going to be required to do and approximate costs and timing involved. The broker was pacing again, because my timeline didn’t fit his closing timeline. Ironically, the seller, who had much more at stake, was focused on getting this issue fixed rather than closing the sale so he could buy his new home.

In the end, we got the lot line adjusted, the appropriate documents filed, and the sale went through. Turned out the adjoiner had moved the monument about 39 feet to his favor. I found the old hole where it had been removed.

That day, I said “no” to ever working for real estate brokers or agents again.

As an employee, I only recall telling my boss “no” on two occasions. The first early in my career and the second quite recently. 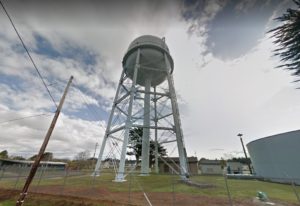 The first was only two weeks after I had gotten married at the ripe old age of 23 in 1982. We had a pre-dredging bathymetric survey to do and my boss had some sort of a transponder system he would mount on towers of known position to somehow “triangulate” positions for the data collection. One of the transponders was to go on the top center of a large metal water tank on a tower in our city. We went to the site and he handed me this thing with a magnetic base and instructed me to climb the tower, scurry across the top of the tank and place the thing in the center. I put it in my vest and climbed the ladder, probably at least 80 feet. Then I got to the ladder of welded rebars on the side of the tank. I had zero climbing experience or protective climbing gear. As I crested the curving surface to the top surface of the tank, there were no more welded rebars. I froze. The wind was gusting, the metal surface was shiny and smooth. I was not willing to die that day.

I slowly started working my way back down the rungs, as my boss yelled expletives at me from the ground. I said nothing and just focused on getting down safely. When I got to the ground, I pulled the transponder out of my vest and said, “Fire me if you must, but that is not safe, and I am not doing it for you.” He grumbled but acquiesced. He called the city, which owned the tank, and they sent a maintenance employee out. He was in a harness and tied off. He wasn’t willing to die that day either.

I didn’t get fired.

The second was only about a year ago. We were doing preliminary control design work along a freeway. We planned to bring in a consultant, but thought we could do the control recon and monument setting ourselves. I had never worked inside a freeway right-of-way before.

I quickly grew uneasy being in the median and along the shoulders, even though a couple of the people I was with were very experienced working on the freeway. After two days of having my head on a swivel, uneasy the entire time, I went to my boss. I simply said, “I don’t feel safe working out there. We don’t have the right tools or adequate safety controls. I am not going out there again.”

Unlike the first time, this boss thanked me for my honesty and willingness to step forward. The others on the crew agreed that it could be done safer and more efficiently by our consultant. I was relieved, even though I wasn’t going back out there, regardless of the consequences.

I would bet that we’ve all had times we wish we would have just said no, whether personally or professionally. The lucky ones lived to regret it and learn from it. I have found it much healthier to just say no in the first place.

As I have heard many surveyors say, “I never lost a dime on a job I didn’t take.”