In my Field Notes installments the past few years, I have often written from personal experience, partly to share, but also to stimulate the thoughts and memories of our readers. This will be no different, except these are experiences that have extended to life, in general.

Early in my career, well it was a summer job back then, I worked as a “grunt” on a field crew. We were conducting a boundary survey in a remote, heavily wooded area. The parcels were all at least 10 acres, so many of the residences had years of accumulated “stuff” on the property.

While doing recon of the first day, we came across an item on a property that just didn’t fit with the rest of the aged and rusting “stuff.” It was a fairly new car, nice and clean, tucked way back in the trees and brush. The tracks through the grass to where it sat were still very clear. It was a “car of interest,” for sure. The sage party chief took a few moments to look it over and documented the VIN in his field book, then we went on our way. That afternoon, on the way back to the office, we drove right by the local Highway Patrol office but the party chief didn’t stop.

I was puzzled and asked him why he didn’t stop to report the car? He said, “Young man, we have a few days left to complete this job. If we report it now and it turns up stolen, the owner will know who turned him in. I don’t want a bullet for my noble efforts.”

A few days later, when we had completed the boundary to the chief’s satisfaction, he stopped at the CHP office to report what we had found. Sure enough, the car had been reported as stolen from a city about 60 miles away less than two weeks prior. He provided the physical address and drew a map as to where the car could be found in the brush.

As a field person, we have all needed to interact with the public during the course of our jobs. Sometimes it is just a curious passerby or client. Other times, it is an angry or hostile neighbor. Interpersonal skills are very useful at times like these. Having worked for public agencies the last two-thirds of my career, it seems the opportunity to interact with angry folks was heightened. They didn’t much care for “We are from the government and here to help.” More like, the word government, or anything inferring it, incited some sort of pent up anger. Often it wasn’t even directed at the agency I worked for, and maybe not even the level of government I worked for.

Rather than attempt to diffuse their tirade, I learned that it was best to simply let them vent and show them empathy, where appropriate. Once they had their say, many of them turned out to be very friendly, helpful people. They provided keys to gates, gave parol evidence on where corners could be found and even offered drinks or snacks. Once they knew we were simply there to do our job, and were not representing the people who had wronged them in the past, they were fine, for the most part. Here is a specific example.

I was acting as the party chief for a government crew for a few weeks. We were asked to obtain some additional topographic data around an area where a tunnel adit was going to be drilled. The property was very rural with no permanent residence. I had never been there before.

Upon arrival, I noted that it was double fenced, barbed wire and an electric fence, around the perimeter with livestock inside. We had a key to the gate and a signed right-of-entry form, but nobody answered the phone number listed on it. Cautious, I called the office 250 miles away asking for direction. I was told that nobody was ever there and to just go on in, if we could safely get past the fence. Okay. One of my crewmembers, while a workhorse, was also a bit on the crazy side. He decided to just touch the electric fence to see what would happen. Nothing. It wasn’t energized.

The instrument control point was on a bluff above the adit location, so we hefted the gear over the fence and I started setting up. My crewmembers went to set the backsite on an adjacent control point, then would access through the gate. Within a few minutes my radio chirped and a panic-stricken crewmember was calling for help. They had been intercepted by a very large, angry man carrying a similarly large club.

I quickly jumped the fence and got in my truck, not sure what I was going to do when I got there except strengthen our numbers and hope for the best. Sure enough, he was a big man in bib overalls wielding a tree branch. I quickly offered my card and the right-of-entry form and explained, from a distance, who we were and why we were there. He slowly lowered the club and I could see the anger dissipating. He began to talk to us in a civil manner. 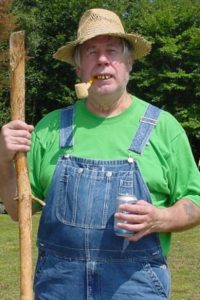 It turns out that he had prize breeding stock hogs on the property and someone had recently shot one from the road and just left it. He had seen me starting to set up on the bluff and ran to his trailer to check his fence monitor, finding the fence was not working. He figured we had disabled it somehow, so he jumped in his truck, quickly finding my crew at his gate.

Of course, it was easy to share empathy, and even our own anger over the shooting incident. I was glad it was a club and not a firearm, considering what had happened to him. He opened the gate and welcomed us onto the property.

Later in the day, while working around his barn and pens, we got a truck stuck in the mud next to his barn. The driver made HUGE ruts going in and trying to get out. We were horrified. From a distance he heard the truck revving and came to check it out. No club in hand this time. We were falling on ourselves apologizing for our stupidity and the damage it had caused. He just laughed like a big bear and said, “Boys, if you ain’t ever been stuck, you ain’t ever been anywhere.” He walked directly to his tractor and pulled us out, telling us not to worry about the ruts, he would fix them with his loader bucket.

Lesson learned – stay calm, listen, be respectful, and you might just make a friend. Thank you, Lester Maddox.

I like to think that much of who I am is a direct result of my experiences as a land surveyor. Now, if I could just learn how to effectively communicate with engineers. Guess I shouldn’t set the bar too high.