Across the world, places of historical significance are regularly monitored to ensure they are cared for properly and preserved for future generations. This care and attention can help us learn more about our past and inform design and building projects of the future.

When surveying and mapping historic sites, accessibility is often a key factor, and in confined areas such as labyrinths, tunnels and stairwells the job can literally require working in the dark. Aging walls, masonry defects and timber decay must be taken into consideration when inspecting and surveying buildings which could be centuries old.

A handheld mobile mapping device using SLAM (Simultaneous Localization and Mapping) technology, therefore, comes into its own in these situations, as it can easily, quickly and safely be used in complex environments, even without GPS.

In today’s world, it’s even more important to carry out these assessments of historical sites quickly and safely. Whether regions are adhering to lockdown, social distancing or simply experiencing uncertainty in both the construction industry and the heritage sector–geospatial technology could be one solution in assessing and maintaining these valuable sites.

Here are a few case studies of how SLAM technology has contributed to the ongoing surveillance and maintenance of historical sites.

France boasts over 40,000 historical monuments, all of which have great significance to the country’s rich past. One of its most famous is located at the tip of the Champs-Elysees in central Paris–the iconic Arc de Triomphe. 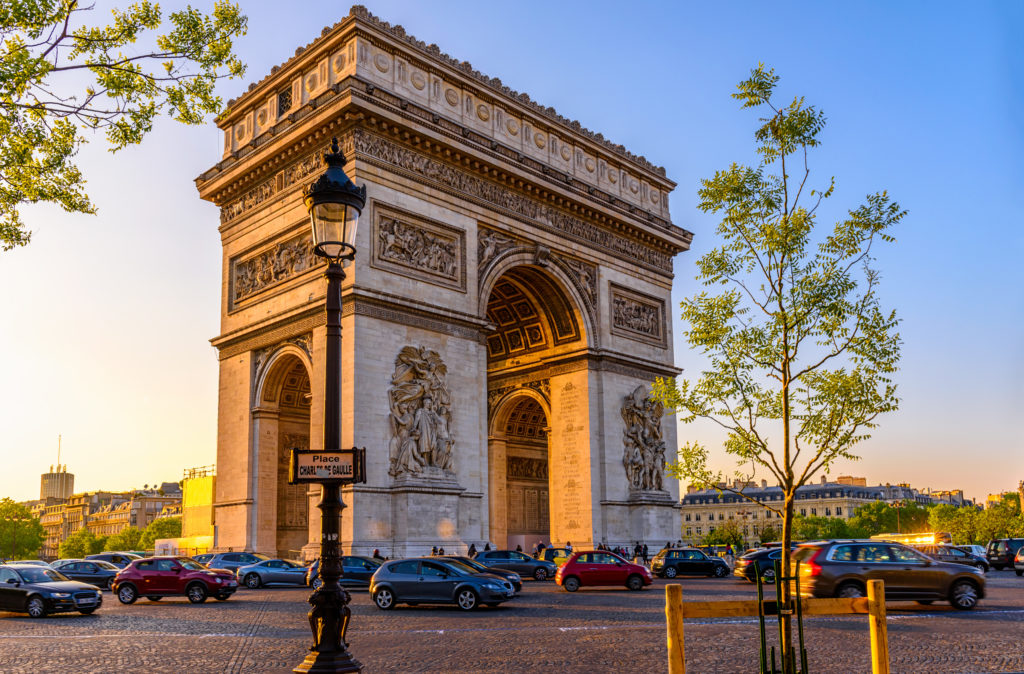 Constructed in the early 19th century, it honors those who fought and died for the country in the French Revolution and Napoleonic Wars. It measures 50 meters tall, 45 meters wide and 22 meters deep, and stands proud in the center of a busy roundabout, making access with traditional surveying tools tricky.

The Arc de Triomphe is one of the busiest and most visited tourist attractions in Paris, with approximately 600,000 visitors per year. Navigating the crowds and chaotic traffic with traditional static scanning devices is not a viable option. So a surveying team from Geotopo had to find a more versatile and efficient solution. 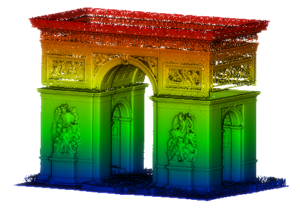 The Arc de Triomphe in Paris (above) and its digital scan (this picture).

Requiring a precise scan but delivered at speed, GeoSLAM’s ZEB-HORIZON was chosen as the scanning tool, given its ability to capture distant features at a range of 100 meters. The device captures 300,000 points per second, ticking the requirement for a rapid mobile scanning solution. Its primary method of data collection is “walk and scan,” with minimal training required for operators.

In order to carry out the survey, the operator walked around the Arc, returning to complete a figure-eight shape, all in one fluid motion. After 10 minutes, the entire data capture was complete, obtaining 10 million points with two-centimeter accuracy–together depicting the engravings of war victories as designed by architect, Guillaume Abel Blouet in 1833.

Achieving the same results with a static scanner would have taken considerably longer due to the numerous set-ups and the time it takes to complete each scan.

With such significant project restrictions due to the structure’s location and popularity, the surveying team from Geotopo was delighted with the outcome, generating data used to help preserve the Arc de Triomphe for many years to come.

When surveying historical sites, getting the information needed quickly, safely and without disruption is a high priority, especially when such locations are operational and scans need to take place within small windows of time.

This was precisely the case when a team from Oxford Archaeology wanted to survey an elegant and beautiful 12th-century Benedictine monastery in Jerusalem. This was because the entire building needed to be surveyed within the 30-minute period between the end of Vespers–the evening service–and the time when the public would be allowed into the monastery.

A project like this with a tight deadline would have been beyond the scope of static scanners but is tailor-made for handheld mobile mapping devices such as the GeoSLAM ZEB-REVO. The ZEB-REVO employs a highly robust 3D SLAM algorithm, which is at its best in complex, enclosed, multi-level environments.

The surveyors were able to check the survey data instantly while on site, meaning they could go back and re-scan immediately if necessary, reducing the risk of “data omission” from missed features once back in the office.

With the use of a mobile “go-anywhere” scanner, the reconnaissance, scanning and creation of a detailed 3D record of the unique domed building were done in just 30 minutes–up to 10 times faster than a static survey would be able to achieve.

On the very same expedition, Oxford Archaeology also scanned the Schneller Building in Jerusalem. In its 160-year history the building has been used as an orphanage, barracks and ammunition arsenal. A year previously, another archaeological team unearthed the remains of a Roman bathhouse and winery under the site. The next stage of the building’s history is a conversion into a museum of Judaism–hence the requirement for a complete, high-accuracy survey of the site. 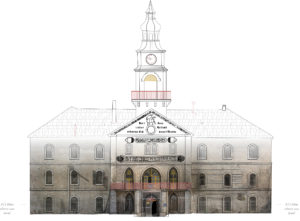 The Schneller Orphanage that operated in Jerusalem from 1860 to 1940 was one of the first major structures to be built outside the Old City of Jerusalem. It was scanned to help plan for its conversion to a museum.

Made up of four floors, 130 rooms, an outer courtyard and a number of stables, the survey team needed to work quickly to scan the entire site. In three 30-minute scans the entire building was captured, including survey control points to geo-reference the data. Using traditional scanners, this would have taken several weeks and involved multiple set-ups.

The team also surveyed a dilapidated 19th-century merchant house in the ancient Arab town of Jaffa. The challenge here was to record the building while construction works were in progress, with hoardings and scaffolding obscuring structures. Once a near-impossible task, the ZEB-REVO was able to collect survey-grade data in a matter of hours. That data formed the basis of a working record of elevations, sections and plans.

Built as an underground narrow-gauge railway in 1863, the Ramsgate Tunnels in Kent were used to shelter some 60,000 people during WWII. As such, the five-kilometer network of underground passageways–in some places 27 meters deep–became the most extensive underground public shelter system in the world. 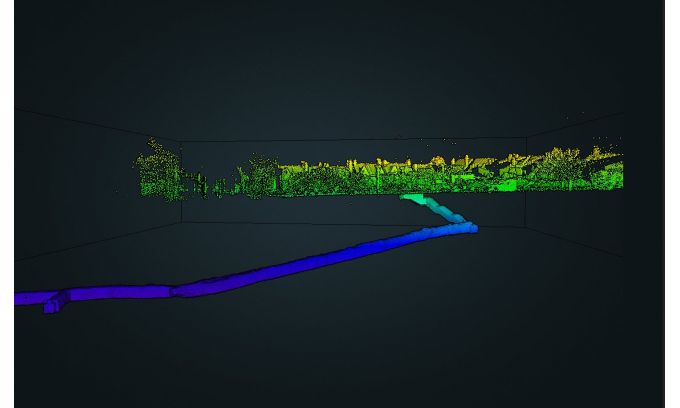 A digital look at the Ramsgate Tunnel
under Kent, England.

After falling into disrepair, leaving behind a long-existing collapse in one area of the tunnels, it was decided to redevelop the site. The first step was to provide a preliminary map of the damage to assess tunnels that were previously inaccessible.

Using a GeoSLAM ZEB-HORIZON handheld laser scanner, a team from Historic England was allowed to assess tunnels that were previously inaccessible and map the extent of the damage and the approximate location relative to the surface.

The technology allowed the team to reach further down each channel where a quick overview of the extent of the damage was needed, and its approximate location relative to the surface.

A total of nine scans comprised the complete survey, taking around 10 minutes for each scan. Compared to a static scanner, using a handheld mobile mapping solution improved the speed of the scanning process dramatically.

The scans were incredibly revealing. One scan showed quite dramatically how the collapse of the tunnel caused a blockage, and the dataset as a whole provided Historic England with a real understanding of what needed to be done to preserve them for future generations.