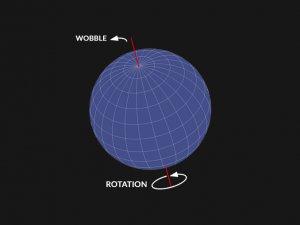 A basic illustration of Chandler’s Wobble.

Above: The Gaithersburg Latitude Observatory is now a community park.

My tale of locating the latitude pier of the Cincinnati Latitude Observatory, one of six international latitude observatories now defunct but historically significant.

It was 1974, and I’d been working at the National Geodetic Survey (NGS) for two years. One afternoon my boss told me to deliver paperwork to an office we had in Gaithersburg, Maryland, just a few miles away. I’d never heard of this office, but dutifully off I went. When I got there and saw what it was, I could only think, “I want this job!” 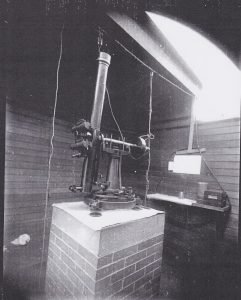 The Wanschaft telescope was used in all six observatories.

The Gaithersburg International Latitude Observatory was just over eight miles from our headquarters in Rockville, Maryland. You really couldn’t call it an office. The entire facility consisted of a small “shack”—the latitude observatory—that contained the astronomic telescope designed specifically for the purpose of observing latitude as well as the house where the observer, Mac Curren, and his family lived.

The observer’s job every clear night was to perform a set of measurements for an assigned set of near-zenith pairs of stars following the Horrebow-Talcott method. This site was one of six similar observatories located around the globe at approximately 39° 08’ north latitude.

All six observatories were observing the same stars each night from their respective locations, and those measurements were used to determine the amount of wobble of the Earth around its axis, typically about .7 arc seconds over 427 days. It’s commonly called the Chandler Wobble, after the American astronomer Seth Carlo Chandler who described the effect in his 1891 signature paper, “On the Variation of Latitude.”

The network of observatories made up the foundation of the International Latitude Service that had been created by the International Geodetic Association in 1895. In addition to Gaithersburg, the network originally included stations located in Cincinnati, Ohio; Ukiah, California; Mizusawa, Japan; Charjui, Turkestan; and Carloforte, Italy. 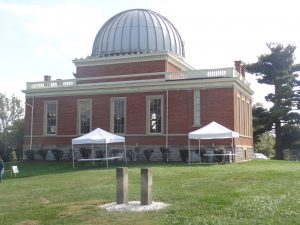 The Cincinnati Latitude Observatory was built on the grounds of the Mt. Lookout Observatory.

All stations in the network began their observations in the fall of 1899. With some minor differences, all of the sites used the same equipment. The nearly identical meridian telescopes were all designed and constructed by Julius Wanschaff in Berlin, Germany. An excellent description of this subject can be found in the article, “Wandering Pole, Wobbling Grid” by Trudy E. Bell. 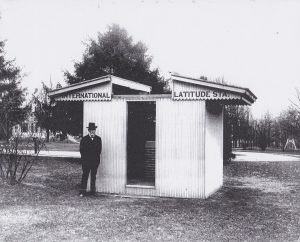 With significant improvement of geodetic satellites and other space-based observations, by 1980 the functions of these optical observatories were no longer needed. With the retirement of Mr. Curren, regrettably that job went away.

The facilities in Gaithersburg and Ukiah were turned over to their respective city parks departments, which in both cases have preserved the observatories and created beautiful community parks. In fact, my wife Renee Shields-Doyle and I were married at the Gaithersburg site in June of 2017.

Due to a combination of financial and network geometry considerations, the Cincinnati Latitude Observatory, which had been built on the grounds of the existing Mt. Lookout Observatory, ceased this function in 1915, having participated for only 16 years. After my retirement from NGS in 2013, I continued to have numerous opportunities to travel and stay engaged with the surveying and geographic information communities, including volunteering as a docent for the Gaithersburg observatory.

In October of 2016, my not-yet wife and I paid a visit to her brother and his family who live in the Cincinnati area, and while there we took a few hours to visit the Cincinnati observatory built in 1873 on Mt. Lookout.

Because of its unique location along the 39th parallel of latitude, the facility and staff have had a long and important legacy of collaboration with the U.S. Coast & Geodetic Survey (USC&GS), the predecessor to NGS, independent of the Latitude Observatory function.

During July 18 to October 5, 1881 USC&GS established a separate astronomic latitude and longitude station on the observatory grounds under the direction of Edwin Smith, G.W. Dean, and Cephas Sinclair. The stone pillars that supported their transit telescope still stand behind the observatory’s main building in excellent condition.

Even though this station played an important role in the work of USC&GS to determine the deflection of the vertical for the expanding national triangulation network, the geodetic coordinate values were never published as part of the National Spatial Reference System. Data for this station is published only in USC&GS Special Publication 110, “Astronomic Determinations by United States Coast and Geodetic Survey and other Organizations.” Sadly, when the function of the Cincinnati Latitude Observatory ceased in 1915, the pier (or the stand that the telescope was mounted on), together with the shed protecting it, were razed, and the Wanschaff telescope was transferred to the Smithsonian Institution (never to been seen again; pan to final scene from Raiders of the Lost Ark!).

Planning to Locate the Pier

During our visit, Renee and I had the opportunity to meet with one of the staff members and discuss not only the science history of the observatory but also its participation in the International Latitude Service. While the staff was certainly aware of the function of the station, they had only a general idea of where it had been located.

In the course of the conversation, we suggested an effort be made to recover the exact location of the latitude pier and commemorate its history. While the observatory staff was exceeding supportive of our idea, they cautioned that before a spoonful of dirt could be turned to look for the pier, they needed approval from the administration of the University of Cincinnati (UC) that owns the grounds the observatory sits on.

With efforts begun to connect with the appropriate UC office, I decided it was also important to connect and partner with representatives of the Professional Land Surveyors of Ohio (PLSO). PLSO executive director Melinda Gilpin suggested we contact Gary Nichols and Rose Coors, officers of the PLSO southwest chapter, and Steve Cahill of the Cincinnati chapter. Gary and Rose are also active members of the Surveyors Historical Society (SHS).

In short order we had everyone excited and engaged in planning and coordinating an effort to recover the precise location of the observatory pier. We were all hopeful that when the latitude observatory building and pillar had been taken down, that portion of the pillar that was just below ground level would be left in place.

We hoped it would require only a few phone calls or emails and just a couple of weeks to get the required permission from UC, but the wheels of any bureaucratic organization can sometimes turn slowly.

After two years, on the morning of Monday, October 22, 2018, all the parties convened in the observatory’s conference room. During an hour-long meeting, we explained the historical aspects of the latitude observatory and the general ideas that PLSO and SHS had to recover and commemorate the site. The representatives of the UC Office of Planning, Design and Construction gave their permission for us to begin our recovery effort. Being optimistic about the outcome of the meeting, we had arranged that all the necessary participants be there. The happy band of surveyors quickly moved into action. Several different activities began immediately.

Working with previous computations, Gary and Rose had set a small stake at the coordinates that we believed to be the location of the telescope pillar. Two observers using ground-penetrating radar (GPR), graciously provided by Rob Harris, owner of The Underground Detective, began to methodically scan an area around the stake Gary and Rose had set.

It did not take long for the GPR observations to return exciting images of what appeared to be a 4-foot by 4-foot structure almost exactly where the stake had been set. The GPR team, using white spray paint, outlined an area with the greatest signal return. We were all feeling cautiously optimistic.

I was given the great honor of pushing in the first probe; the tip of the probe rod made that wonderful “chunk” noise just a few inches below the grass, eliciting smiles and a rush that few others than surveyors can appreciate. We knew we had found it.

Several members of the team with small shovels had uncovered the brick foundation of the latitude pier for likely the first time since it had been dismantled and buried sometime in the 1980s. 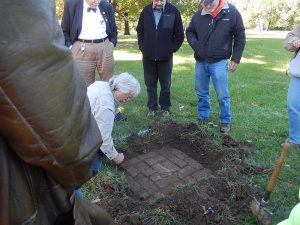 While this was going on, Steve Cahill of Abercrombie Associates set a dual-frequency GNSS receiver over the center point of the1881 USC&GS astronomic station located about 160 ft north of the latitude observatory pillar, with the intention of completing sufficient observations to submit that station to NGS for inclusion in the OPUS Share Solutions database.

While the station is in a GPS-able location, some data-collection malfunctions prohibited acquiring data of sufficient quantity and quality to submit at that time. Attempts were also made to collect GPS observations at the latitude pillar but were greatly hampered by a large tree just to the south with the same results. Another attempt for both stations will be made by PLSO volunteers during the winter when the leaves are off.

With the missing pier now found, what remains is to construct a commemorative marker and interpretative signage in collaboration with PLSO, UC and the staff of the observatory and to host an appropriate dedication ceremony open to the public.

This effort was the work of many people who all deserve recognition. They include: Craig Niemi, executive director of the Cincinnati Observatory; John Ventre, observatory historian; Lucy Cossentino-Sinnard and John Martini from the UC Office of Planning, Design and Construction; Rob Harris, Carl Goyette, and Erik Vaundry from The Underground Detective; Gary Nichols and Rose Coors, principals of Nichols Surveying; Melinda Gilpin, executive director of PLSO; Steve Cahill from Abercrombie Associates; retired local surveyors Dan Rensing and Lee Nordloh; Renee Shields-Doyle and myself of Base 9 Geodetic Consulting Services.

I am sorry I never got “that job.” It has been a wonder, watching the technology used for surveying to advance in leaps and bounds in the last 50 years as compared with the previous 200, and I wouldn’t have missed a minute of it. Still, I do miss the old days, tracking the stars, sipping “observing fluid,” and marveling at the universe.