This summer I had the joy of experiencing the best boundary retracement “job” of my 40-year surveying career, and it came about quite by accident.

For most of my life I’ve had the privilege of visiting a cabin on the eastern side of the Sierra Nevada Mountains owned by the family of a childhood friend. In the past few years, as I’ve gotten older, my appreciation for my time at the cabin has grown stronger. This is not only because I don’t have to pitch a tent, but truly due to the serenity and beauty of the surroundings—not to mention the trout-filled stream less than 100’ away.

On my first visit this summer, the owner (my childhood friend) came up to join me. As usual, we spent hours reminiscing about childhood memories, laughing about the crazy things we did and lived to talk about, and just talking about life. At some point along the way, I asked him about the history of the cabin and the ground on which it sits. Although I knew the area had once been a booming silver mining area, I knew little else.

He pulled out a book that covered the history of the area and explained that the land around the cabin had once been home to about 3,000 silver miners.

Within a couple-hundred yards of the cabin once stood a large boarding house, built in the mid 1870s. Just a about a mile west of the cabin was a city, where remnants of the original jail foundation can still be seen. I found myself trying to imagine this now-tranquil environment teeming with miners, horses, mules, and equipment, with raucous saloons just up the road.

The book had some great pictures and historical text, which I really enjoyed.

Then, the nugget fell in my lap. He told me that the cabin sits on ground that was once a silver mining claim and that he had always wondered more about the history of the claim and where exactly it was located. Hmmm, I happened to know someone who maybe could help find that out, so I went to work the following week.

I contacted the BLM to inquire about records they might have. Amazingly, my friend, who is not a surveyor, knew the section, township, and range information for the cabin location, which was a tremendous help. 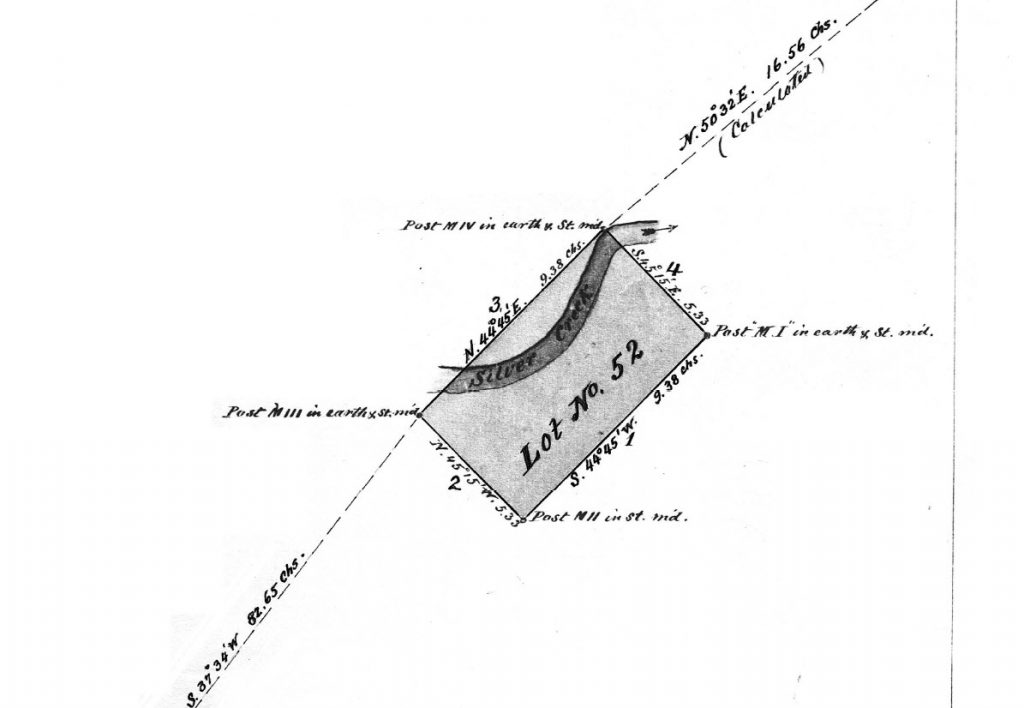 Within a couple of days, I received the original GLO plat, the original mineral claim plat dated June 1876, and several patent documents from the BLM. I followed up with the BLM to see if they had the notes from the mining claim survey, which they did.

Because the area had been heavily mined during the years just prior to and following the date of the mining claim survey, I didn’t expect to find any evidence of the four rock mounds and posts that were set at the corners in 1876. But, after plotting the claim boundary in Google imagery, it looked like one of the corners would fall in a meadow that serves as a cattle pasture in the late summer and fall. Seemed like a possibility. 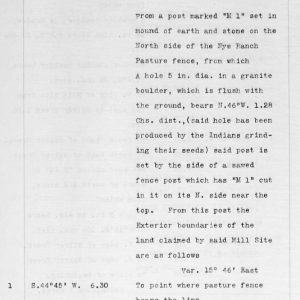 The real gem was in the field notes. The crew initially set and scribed a post set in a mound of earth and stone, then immediately made a call to a corner accessory before running the first line of the claim boundary.

The call reads, “From a post marked ‘M 1’ set in a mound of stone on the North side of the Nye Ranch pasture fence, from which A hole 5 in. in dia. in a granite boulder, which is flush with the ground, bears N.46˚W. 1.28 Chs. dist., (said hole has been produced by the Indians grinding their seeds)”

Heck, that was only 85’ +/- from the corner, and based on my plot, not more than a few hundred feet from the cabin. I could hardly contain my excitement.

I called the cabin owner and asked him if he had ever seen a grinding rock on the property. He hadn’t, nor had he ever heard tell of one. He doubted it was there, especially where my plot showed it to be. Now I couldn’t get back up to the cabin fast enough.

After the two-hour drive during which I was highly excitable, I jumped out of the truck and virtually ran down to the area where corner “M 1” plotted, then paced northwest, compass in hand (yes, I adjusted for the change in declination from 1876 to 2017), and started searching.

To my amazement, there it was, under decades’ (maybe a century or more) of pine needles: the grinding hole in the granite boulder. I was literally dancing in the forest, hooting and hollering as if I had found a gold nugget the size of my fist. 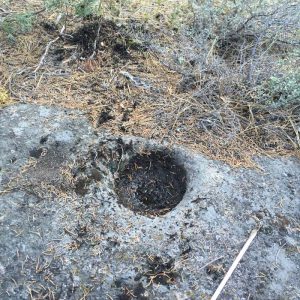 My first photo of the grinding hole.

I snapped a picture of it (I didn’t put anything down for scale, like a rookie), then realized I had nobody to share it with. It’s about an 8-mile drive from the cabin to the secret cell coverage spot, so that would have to wait. I had more recon work to do!

The grinding hole fell about 30’ farther northwest than I had paced, but that was based on a guess on the location of “M 1.” I paced back towards “M 1” from the rock, and that would put “M 1” in the westbound lane of a very rural state highway, so there’s likely no evidence of the corner to find there (except the grinding rock).

I went back to the cabin and unpacked, still dancing in glee. Later, I strolled out to the meadow to look for evidence of corner “M 3,” but the grass was almost waist-high, so no chance of finding any evidence of a rock mound in those conditions. I would have to wait for the cattle to be brought to the high country later in the summer to revisit that location.

I then drove out to text the cabin owner the picture of the grinding hole. He couldn’t believe it!

Because a state highway now went through the original mining claim parcel, I decided to search the records of the California Department of Transportation (DOT) to see if they had any records that would be of assistance. They did.

I found records of a right-of-way widening survey done in 1976 which also contained scans of USFS field notes from 1975 stating that the USFS crew had recovered the original claim corners. The DOT crew had subsequently tied them for their right-of-way survey, and the “measured” distances and angles matched amazingly well to the original mining claim plat considering the methods and equipment used. 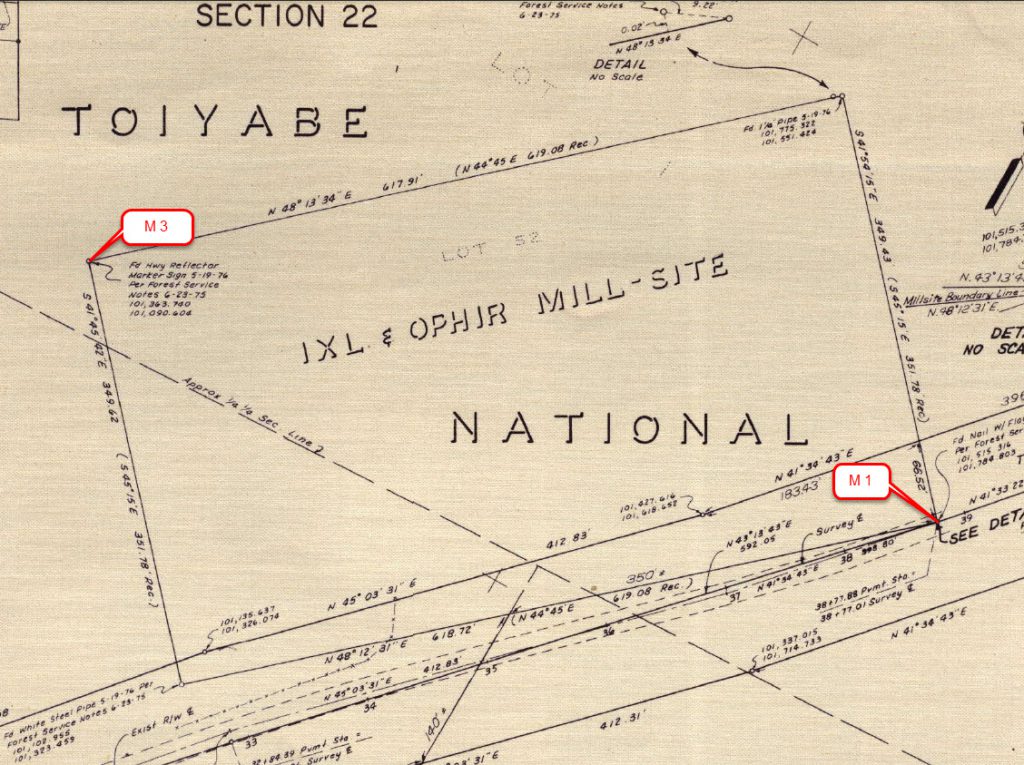 Sure enough, corner “M 1” fell in the state highway, as the grinding rock location had indicated.

I plotted the DOT survey plat over the Google imagery, which narrowed down any future searching I would do. Although I was a bit disappointed to discover that I wasn’t the first person to attempt to retrace the 1876 survey, I was pleased that I could now show my friend, the cabin owner, where the original claim was on the ground.

On the subsequent visit, we found all four of the corners (M 1 was reported as a spike in the highway, which I “located” with a metal detector and the grinding rock call) as surveyed in 1976 by the DOT crew. Mission accomplished!

Now, my friend has more historical documents and maps related to the family cabin, and I have the story of finding a more than 1,000- (probably many thousands-) year-old, man-made feature (likely made by the Wašiw people) that was used as a corner accessory.

Not only did this turn out to be the coolest boundary recovery I have ever done, but it was best survey project I have ever worked on, as well. I had no client, no budget, no expected deliverables, and I could do the work with an adult beverage in hand, if I chose to.

I think I might just take up surveying as a hobby when I retire.

“A Silver Survey in My Golden Years” Comments